Nowy Świat (New World) is the most representative shopping street of Warsaw’s (rebuilt) city centre. The most famous outlet is still probably the Blika patisserie, one of the very few private family shops under communism, famous for its doughnuts. At the corner with Świętokrzyska there used to be a historic café with the same name Nowy Świat. Opened in 1883, it was for over a century a favourite meeting place for artists, intellectuals and, increasingly, dignitaries and agents. I was there often in the early-mid 1990s. As a western student I could easily afford its inflated prices, and wait for the hyper-slow state-sector service. Even without liking its decadent stuccoes & decor, nor the occasional fraudsters trying to lure foreigners into the most improbable ventures, at a stone's throw from the University it was then one of the very few quiet places one could use for meetings and interviews, as well as to catch up with the western press. But like many other state-owned addresses, it shut down. For a decade or so, the landlord, i.e. the city council, did not know what to do with it. 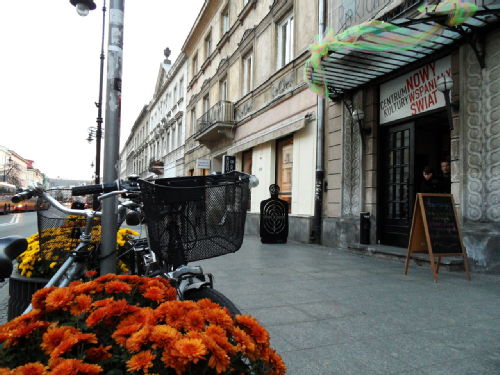 Finally, last year, the council called a contest for opening a non-profit cultural centre in it. Out of 15 competitors, this was won by the leftwing group Krytyka Polityczna, for its proposal of a multi-function bar + cultural centre focusing on photography, cinema, literature, music and politics. The café-cum-cultural centre is called “Nowy Wspaniały Świat” (Brave New World), in a double-edged irony of the previous place and of Huxley’s dystopia, and it has been a successful bet. Its varied program is very attractive and the place has become very popular and crowded. To the point of annoying part of the establishment. No less than Jarosław Kaczyński, the former prime minister and narrowly-defeated presidential candidate, complained recently that Warsaw’s mayor could offer such a prestigious address to a leftist group who can use it to corrupt the Polish youth attending the nearby university. Warsaw’s mayor is the liberal-conservative Hanna Gronkiewitz-Waltz, herself very traditional, but not as much as her predecessor, Jarosław’s twin Lech, who must be turning in his grave. A good share of Nowy Wspaniały Świat’s program is taken by LGBT initiatives – Lech used to ban gay events, and now these are not just tolerated but even indirectly sponsored by the city (to complicate things, according to the twins’ former friend and now enemy Lech Wałesa, the ever-bachelor Jarosław used to hang around with a ‘husband’). 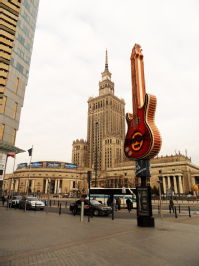 On the 21st of November Poles will vote in the local elections and Warsaw’s citizens will probably confirm Hanna Gronkiewitz-Waltz. Nowy Wspaniały Świat will then survive as a brilliant exception in the otherwise hyper-consumerist Warsaw’s City Centre flooded with bars’ and restaurants’ chains, and the populist right will endure a severe fourth consecutive electoral defeat. Kaczyński may not be helped by his candid admission that during the presidential campaign he was under the effect of strong painkillers to cope with his brother’s loss, and did not really know what he was saying – the reason why he had actually seemed quite human to my blog, but imagine a US presidential candidate admitting that he was on drugs during the campaign.