Under German beds: the surprising adventures of a Polish cleaner in Offenbach 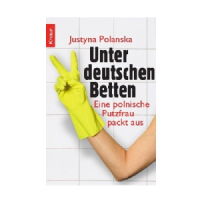 The autobiography of a Polish cleaner in Germany, under the title “Under German beds: A Polish cleaning lady unpacks”, has been an instant success and is currently in third place in the list of German bestsellers.

The book by Justyna Polanska, 32 year-old who emigrated at the age of 19 from Poznań to Offenbach near Frankfurt, has all is needed for an immediately-likeable bestseller. First, an accessible contemporary style of short sections and short sentences (I read the 210pp over a couple of evenings, and I am usually slow with German literature), possibly the product of heavy editing (I couldn't detect any underlying Polonism). Second, stories that relate to the lives of millions people. Third, a mix of cheap psychology and practical information – the two most sold items of self-help literature (Polanska also offers cleaning advice on the internet: www.putzen-mit-justyna.de). And, decisively, a soft tabu topic.

The two main reasons why Germans are reading this book with such Drang are probably two. First the ‘dirty’ stories on the sexual harassment Polanska has had to endure in her 12 years of cleaning in Germany. These are all very depressing and in my view not the best part of the book, but undoubtedly they are a selling point, flagged up already in the title (“under German kitchen sinks” wouldn’t sell that much). Secondly, and intriguingly, the perspective of a cleaner is a formidable “mirror” on the real lives of Germans – private lives but also, metaphorically, public life. I can imagine Germans buying the book to discover “how we (and our neighbours) really look like”. As Polanska puts it: “this is the privilege of the cleaning lady: we look behind the curtains.”

These curtains are particularly thick in Germany, and this is why the topic is “tabu”. Not just because Polanska tells us that Germans (unsurprisingly) are not as clean and orderly as they claim. Domestic cleaning is particularly widespread, and increasing, in Germany, and it is also particularly informal. Western Germans have traditionally paid more attention to looking after their homes than many Central and Northern European neighbours: men, under industrial vocational training influence, are into DIY, and women were largely house-bound (the tax system discourages the dual-earner family, childcare provisions were minimal, schools end at midday). Only recently female full-time employment has boomed – hence the demand for domestic cleaners. Other countries have had it for longer (Southern Europe) or have already developed partial alternatives (public services in Scandinavia, ready meals and just not caring in the UK).

But also, other European countries have tried to ‘regularise’ domestic cleaning, usually through major social security incentives (Italy) or ‘vouchers’ for families so that they employ regular workers (Austria, Scandinavia). As a result, paradoxically, the domestic cleaning profession is much more ‘regular’ in a notoriously informal economy such as the Italian one, than in the supposedly ‘coordinated’ one of Germany. In her comparison between Germany and Italy, Finitelli (‘Migration Policy between Restrictive Purposes and Structural Demand: The Case of the Domestic Worker Sector in Germany and Italy.’ In Metz-Göckel, S., Morokvasic, M. and Münst, S. (eds) Migration and Mobility in an Enlarged Europe: A Gender Perspective, 2008) stresses the major role of ‘regularisations’ of domestic migrant workers in Italy, in contrast to the ‘undocumented’ German reality; officially, in Germany there are only 148 thousand domestic workers (90% of them German!), but surveys indicate that 4 million German families use domestic labour: assuming that it is just for one day a week, there must be 800,000 domestic cleaners, without even counting the large, not much more formal sector of business cleaning. So domestic cleaning is a private and public tabu, something which Germans pretend it doesn’t exist. In other countries it is a more public topic: in 1990 for a while the most debated issue in the Italian Left was not the fall of the Berlin Wall, but, following an article by Valentino Parlato, whether it's acceptable for communists to have domestic cleaners. By the way, research is discovering the issue: in Italy much has been written by Asher Colombo and by Bianca Beccalli (who already forty years ago had written a paper on cleaning and socialist division of labour...), in the UK interesting work is being carried out by Nick Clark at London Metropolitan University.

Indeed, Polanska herself works illegally. She deals with her guilt for not paying tax by doing some volunteer cleaning for poor old people, but it is not clear how she deals with insurance and pension - now she is happily married to a German Italian, so I presume that was the solution. But she points to the fact that the real beneficiaries of informal domestic labour are, of course, the employers. She cleans for both families and some businesses (medical practices, restaurants, brothels etc), and nobody would employ her if she issued a receipt. Among her employers there are lawyers, police officers, journalists, politicians: all require maximal secrecy (indeed, every now and then a politician is found using undocumented migrant labour – usually it is those who in public oppose immigration...).

For me, the attraction of the book is somewhere else, at the intersection between sociology of work and sociology of migration. Domestic cleaning is a complex ‘labour process’, and the strategies of employer control and employee survival are particularly varied. Exploitation through late- and underpaying is frequent, given the vulnerability of female undocumented workers. It is also a profession at the lowest end of social prestige, and Polanska has something to say about the German expression “meine Putzfrau” (“my cleaning lady” - it could be worse: in Italy “la mia Filippina” is commonly used, even when the worker is not even from the Philippines). And she tells about lack of humanity, for instance about never being offered a drink, even on hot days, when the employing family can ostentatiously sip their cold drinks while looking at her sweating.

In terms of migration, the book is ambiguous. Polanska decided to leave Poland at 19, suddenly, knowing only one word of German (the ominous “Fenster”, window), answering a newspaper ad for au pairs in Germany (the au pair job will turn out to be extreme exploitation: a year of starving with little or no pay), and rationalises it retrospectively by writing: “About my country I can simply say: there is no perspective. A young person can’t do anything in Poland. Many of my friends have qualifications and earn €350 monthly – when they are lucky”. Which is quite an absurd statement about a so-called “economic tiger” where average pay is nearly €1,000/month (gross), especially given that Poznan is better than average. But it is understandable: in Poland there are actually lots of chances, but very unevenly distributed. Otherwise Polanska’s mother and sister would not have followed her to Germany, a few years later, to take up the same profession.

The author also tells about German prejudice against Poles: “do you have Coca Cola?” is the lightest, abuse for alleged inclination to stealing and prostitution the heaviest. Even her apparently well-educated German neighbours, when they find any rubbish in the communal areas of the apartment bloc, deliver it to her door, because logically only foreigners could leave rubbish around. But on Polish-German stereotypes, rather than this book I’d recommend the recent comedy film “Hochzeitspolka” (by Lars Jessen, 2010), on a Polish-German wedding where a century of “misunderstandings” explode. Polanska comes from a quite typical Polish conservative family. Among other things, in Germany she discovers that “homosexuals are normal people – really normal people”. Her background explains some of her criticism of Germans: dressing up and make-up is for her normal, traditional Polish femininity, but Germans despise it as a sign of being ‘easy’ (on this topic see Women Migrants from East to West, by Passerini, Lyon, Capussotti and Laliotou, 2007). And her repeated anger for not being offered drinks is normal coming for a country where the first sentence you hear when you enter a house or an office is always “coffee or tea?”.

Despite the stories of sexual harassment and exploitation, this book might offer a rather ‘rosy’ picture of immigration and cleaning: Polanska earns her €10/hour, is married to a German Italian, conducts a rather normal life. It is difficult to predict if the book legitimates, or criticises the current state. In any case, it ‘humanises’ an unspoken category of people, and opens a tabu. It is a positive compensation to other recent German bestsellers which are openly xenophobic: Sarrazin’s Deutschland schafft sich ab and, most horribly, Kein Schwarz. Kein Rot. Kein Gold: Armut für alle im “Lustigen Migrantenstadl” by Udo Ulfkotte, while it is in line with literary fashion: the last German Book Prize shortlisting was dominated by authors with immigration background. And as cleaning still is a 99% feminised profession, it is a good book to comment on today, International Women's Day.