The Hamburger Bahnhof, a derelict station in no man’s land at the times of the Wall, claims now to be the biggest contemporary art museum in Europe – at least in the narrow sense of art from 1960 (Museum für Gegenwart, i.e. Museum of the Present). Its size allows it to currently host the unique exhibition by Carsten Höller, “Soma”. 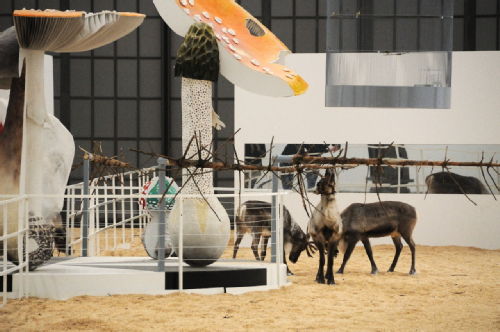 Soma is the miraculous drink allowing enlightenment and access to the divine sphere in the Ringveda, the oldest Hindu scripture (and, from the 2nd millennium BC, arguably the oldest surviving religious scripture overall). As it happens after so much time, nobody remembers the nature of this Soma, but since the XIX century philologists, scientists and ethnologists have converged over the hypothesis that the decisive ingredient was the fly amanita mushroom. Wait: the fly amanita mushroom is poisonous, so how could they drink its extract? Simple, by filtering – and the most likely way the Central Asian tribes of 4,000 years ago could filter it is through the kidneys of their fellow reindeer, who, themselves, are keen fly amanita eaters. Reindeer urine (possibly with some taste corrector) should have been the basis of Soma and the key to knowledge and to the divine sphere.

This is hitherto just speculative hypothesis. Carsten Höller, who has a Habilitation (second PhD) in agriculture sciences and whose artistic work focuses on the relation between science and art, as well as on human interactions (e.g. the huge “Test Site” in the Turbine Hall of Tate Modern in 2006), proposes now an experiment. The Hamburger Bahnhof is split into two symmetric parts. In each there are six reindeer, who are fed large amount of (frozen) fly amanita. Their urine is collected and stored. In each half there are then three species of experiment animals: twelve canaries, four mice and two flies. Over weeks, it can be observed whether the animals on one side start behaving differently: if they drink Soma, will they achieve enlightenment? As science requires, the experiment is double-blind: the animals are not told whether they are fed Soma or just some placebo. Nor are the visitors, as they become, in their interactions, part of the experiment: we do not know which group (if at all!) is fed Soma, and which one is there just for control.

When it starts becoming a bit extravagant is with the double bed in the middle of the hall: here, for just €1,000/night, it is possible to spend the night and observe, undisturbed by other humans, whether maybe the animals achieve the enlightenment when the lights are off and the museum is closed (unfortunately, it is already fully booked until the end of the exhibition).

There’s no actual experimenting: nobody takes any note, and the number of animals is too small as a sample. An experiment is turned into artistic experience and scientific observation into aesthetic observation (the lucky Germans as usual have two words for “observing”: betrachten and beobachten).

In the process, on a conceptual level the visit raises a number of questions as to the impossible communication between science and religion, as to the role of art between the two, and as to the possibility of objective observation. Can humans make scientific experiments on the deepest aspects of humanity? Well, as a social scientist, I found there enough to short-circuit positivists and critical realists.

On the human visitors, the experiment seems to me successful: after overcoming the initial scepticism and incredulity, and once got used to the smell (Soma must have been an acquired taste), visitors spend hours observing the animals and trying to guess which ones are enlightened. Much is pondered about the fact that one of the two canary cages has started weighting more than the other: is it because enlightened birds become lighter? or heavier? A pseudo-scientific idea, in its artistic form, inspires metaphysical questioning.

A spectacular and exhilarating creation, as contemporary art can do. Only in Berlin, until the 6th February 2011. After then, the reindeer will go back to their native Sweden.