Puerta del Sol is not Tahrir Square – yet

Follow-up to On Tahrir Square from Around Europe 2010-12 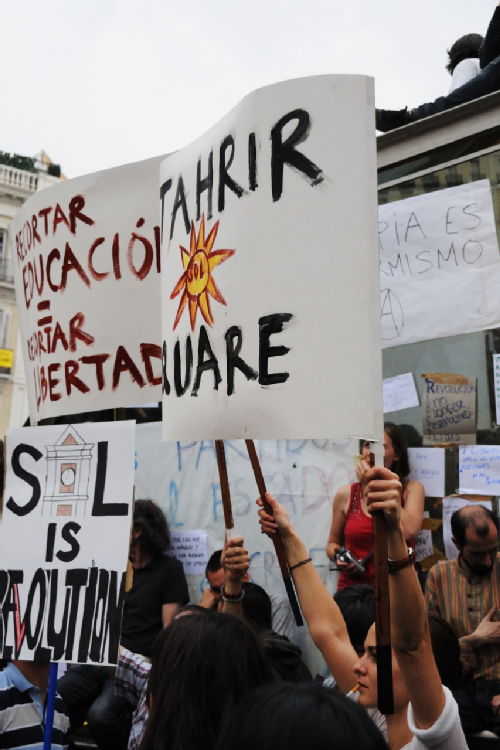 Since Sunday the 15th of May, Puerta del Sol, and other central squares in Spain, are taken over by demonstrators – mostly, if not exclusively, young.

There had been a timid attempt on the 7th of April. Since then, no talk about it in the open – all happened on the social networks. The Sunday demonstrations, for ‘Real Democracy Now’, were called by a loose network of hundreds of micro-associations. Participation (nearly 20,000 in Madrid, and thousands more across the country) was not huge but it was still surprising: it is impossible not to notice that attendance was larger than at the political parties’ rallies in the run-up to next Sunday local elections.

In Madrid demonstrators decided to stay on the Puerta del Sol central square, a bit like in Tahir Square. They erected tents, as demonstrators started to do in the Ukranian Organge Revolution of 2004, and an Egyptian flag turned up. The camp was declared illegal and the next morning dispersed by the police, with 24 arrests. In other words, what is tolerated in Kiev, Beirut, Cairo, London (Democracy Camp on Parliament Square, May-July 2010) – is not in Madrid. The effect was that since then, demonstration take place every day. Today, the demonstration was forbidden overall: it was not “serious” (?!) and it perturbed the election campaign. So, today even more people were in the Square and the police could only look at it – and eventually withdraw among the cheers. If demonstrators originally did not have a clear objective, the ban has given it to them: defend the right to demonstrate, at least until next Sunday (the forecasted rain is the bigger fear now).

What has changed? Spain has 40% youth unemployment and is going through some of the toughest public expenditure cuts in Europe, but until now there had been no protests like those of Greece and Portugal, nor even Ireland and UK.

Let’s admit that up to half of the young unemployed are actually in some sort of education or informal activity: that leaves still a big chunk of people out. Spain is also a country where it is particularly difficult to get housing – rents are twice as high as in Germany, while wages are a half, and with the majority of the employed youth in temporary contracts, mortgages are out of the question. Until recently, tellingly, the only large youth demonstration in Spain were not against lack of jobs and housing: they were against the Ley antibotellón, the regional laws banning parties with alcoholic drinks in public spaces – things that youth without their own place and with little money, but with a friendly climate, liked to indulge in. In other words, youth did not protest against the roots of their condition – lack of housing and of jobs – but just in favour of a little escape – having where to go to drink affordably.

The movement is growing and if not huge it is politically very sensitive. Unlike the Arab revolutions, in this case the role of the social networks is really evident. The majority looks like being already politically aware, but no organised group is visible. The movement is antisystem, with a strong anarchist tone (Spain has the strongest anarchist traditions in Europe). For an anarchist movement, it is quite organised: the occupied square is clean; no violence nor vandalism; no alcohol, to avoid the Ley antibotellón; assemblies and working groups take place in a relaxed athmosphere. Apart from opposition to nearly everything (privatisation; banks; politicians; the Church; employers; trade unions), among the few concrete proposals that I could hear is electoral reform – the current PR system with very small constituencies is actually very damaging to small parties, perpetuating a quasi-duopoly of socialists and conservatives.

Such anti-system, anti-Parliament protest scares the Left most. These are people who would never vote for the Right, which actually can benefit from popular fears of extremism. Today I had lunch in a popular-class bar: the TV was on giving the news of the demonstration, and people were watching with a puzzled look, asking each other what this strange demonstration was about. Nobody knew. Eventually one customer (the one who knows all: he exists in all pubs) explained: ‘they are protesting against bullfighting’. All was suddenly clear, people shrugged their shoulders and went back to their cervezas and football banter.

By contrast, in their rejection of parliament as a political caste, the protests are likely to increase abstention and reduce the electorate of the socialist PSOE, but also of the leftwing, postcommunist United Left (Izquierda Unida), which is particularly alarmed by the anti-union tones.

This is something which happens in other countries too. In Italy, a network of local movements has found a hero in a comedian, Beppe Grillo, whose anti-system party has reached nearly 10% in Bologna and 4-5% in other big cities – mostly votes taken away from the Left and in this sense, a net help for the Right. The traditional Left is increasingly struggling to connect with new, young movements. Only the Greens, where they are strong, have some success.

The wind from the Sahara is at last reaching the North Mediterranean, starting from the nearest country. While Egyptians and Tunisians wanted free elections tout court, this movement wants somehow different elections. It is mostly expressive: when told that they are not concrete, protesters react angrily that the demonstration is concrete. Immediate objectives and revendications such as in Tunesia or Egypt do not exist here - the demonstration itself is the goal (it reminds of Arthur Scargill).

Youth is emerging as a political subject – in North Africa it is the largest, driving class. In demographically old Southern Europe, youth looks more like a minority fighting for existence in the public sphere.