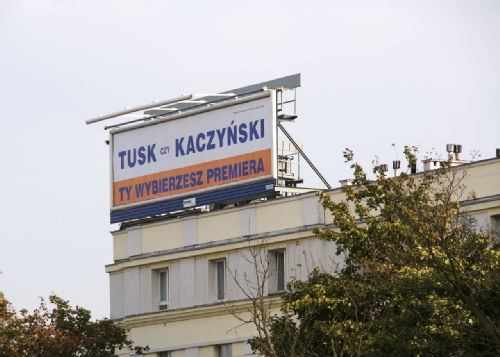 Warsaw wakes up this morning and nothing has changed. Just like every 10th day of each month, there is a religious commemoration of the Smolensk disaster of the 10th April 2010, and Jarosław Kaczyński lays a crown of flowers in front of the presidential palace, in memory of his brother Lech. He would have liked to wake up this morning as winner of the elections, but it does not matter: for him, his brother is still the moral president (because he would have been re-elected, had he not been killed by some sort of liberal conspiracy with Russian involvement), and himself will eventually win the elections in four years: yesterday night, he promised that he will ‘do Budapest in Warsaw’, a reference to the landslide victory of the Hungarian nationalist Right last year, after two terms of socialist government.

The parliamentary elections have confirmed the ruling coalition between liberals (PO) and peasants (PSL), which, according to still unofficial results, should keep a narrow majority. This is undoubtedly a major achievement for Prime Minister Tusk. It is the first time since the fall of communism that a ruling coalition is confirmed after the first term – until now, Poles had constantly expressed their disappointment with governments of whatever colour by voting them out of office at the first opportunity. In the 1990sk, it was the same in all post-communist countries, but Hungarians and Czechs already in the 2000s started to confirm their governments, in an indication of democratic consolidation. Tusk’s victory is all the more remarkable that it comes in the middle of a global crisis, when all governments find it extremely difficult to maintain their support. It may not be all Tusk’s merit, but Poland has been the only European country not to have interrupted its economic growth during the last three years, and it is starting to be referred to as a ‘second Germany’.

Tusk himself has changed and, also because of the need to ally with PSL, has moderated its radical neoliberal orientations of the 1990s. Over the last four years, it has avoided the radical anti-social reforms that he had advocated when he was in opposition. He now he declares that ‘to rule you need a heart’ and even admits that in 1990, in his dispute with Mazowiecki on the pace of economic reforms, it was Mazowiecki who (‘as always’) was right, when saying that the social consequences should be taken into consideration.

However, Tusk’s is not a triumph. His party has lost little ground since 2007 (down from 41% to 39%), but turn-out has gone down from 53% to 48%: the Polish majority did not care to go to vote. The next four years will be difficult, with the preparation to EMU (if such a thing survives!) and increasing internal tensions between radical neoliberals and more moderate sides. Until now, the strongest force for PO was its adversary, Kaczyński’s PiS, whose paranoid government of 2006-07 is remembered with fear by a large majority of the Polish population. But this fear may water down over time, while other, more convincing opposition parties may emerge.

Kaczyński will probably remain leader of PiS despite this sixth consecutive defeat: the party is of a charismatic kind, with all power in the hands of the leader. As usual, during the campaign he showed a more moderate face, but he had a major slip in his book, when insinuating that Angela Merkel’s election may have been the product of ‘dark forces’ – and refusing to clarify what he meant.. ‘Dark forces’ in Poland may mean only two things: Jews – but Merkel is not Jewish and just about the only obsession Kaczyński does not have is anti-semitism; or secret services. Anybody can read that he meant that Merkel is a product of the Stasi – not bad as an international relations start for a candidate Prime Minister.

But PiS is fragmenting: its best representative, Joanna Kluzik-Rutkowska who helped Kaczyński reach a honourable result in the presidential elections last year, defected to PO, and others have split creating another conservative party, PJN (only 2% yesterday). The PiS electorate is largely old demographically, so that time plays against them. Kaczyński’s book, ‘The Poland of Our Dreams’, despite some clumsy Obama/Luther King resonance, betrays how unrealistic his plans are: it even contains a chapter ‘The Polish History of Our Dreams’ – an involuntary confession of how unfounded the romantic vision of Polish history is. It is surprising that the Solidarity union, despite, electing a less political leader last year, decided again to support PiS despite the foreseeable defeat – in four years, it is unlikely that they will repeat the mistake. 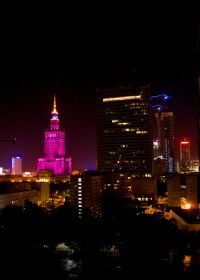 The other opposition with a strong negative electorate is also disappearing: the post-communist Left (SLD), which has obtained the worst result since 1989 (8%). Its young leader Napieralski has not managed to give the party a new image, and even less, something like a distinctive leftwing program. He has resigned today, and the depressing thing is that nobody wants the job.

Poland has been waiting for a new left since 1989, with only one temporarily effective experiment (the Labour Union of the mid-1990s). The surprise of this election is the success of a new fringe party, Palikot’s Movement, which obtained 10% and a stunning 23% among young voters. Palikot is an entrepreneur and a former MP of PO, who made its name through anticlericalism. His party stands for the liberalisation of abortion, same-sex civic unions, end of Catholic education in state schools. In a European perspective, this is hardly radical stuff: most Tories would subscribe to them. What is new is the provocative form of communication, which makes it similar to the Italian radicals, and possibly to the German Pirates who just won in Berlin. But Palikot’s movement is made largely of entrepreneurs and socio-economically it actually sounds individualistic and possibly even more neoliberal than PO (it supports flat income tax and a minimal state). It is likely that as with any maverick party, this one will split and collapse soon – some of it will end back with PO, but some New Left seeds may go into a social terrain which is now fertile for leftwing ideas, on both civil and social rights. For the moment, Poland is a bit more pink, but no more red.