After the Olympics came to me to Coventry, I went to the Olympics. So far, they have brought at least three very good things:

(1) The G4S private security blunder: nobody could have staged such a spectacular, world-vision refutation of the theory that private is more efficient than public; it won’t change policies probably, because despite the crisis neoliberals and privatizers are still all around like zombies, but it will remain in public consciousness - just like the fact that fast increase in performance, as for Great britain and China, is only possible with a coordinated effort and public support (better if not in a authoritarian way)

(2) The multi-ethnic, although still a bit classist, nature of the British triumphs: that’s all for you, Daily Mail

(3) More attention to women’s sport than ever before, and also to less famous sports - although only conditionally on the nationality of the favourites coinciding with that of the reporters

Sometimes it so good to look staged, as if in a continuation of the opening ceremony with its celebration of the NHS, social progress and multi-ethnicity. Take today, wednesday: after over a week flooded by British medals, a day of pause with no British success to talk about, so that the headline news could only be the new horrible data on the economy... Osborne must be furious for the bad timing of his circuses. 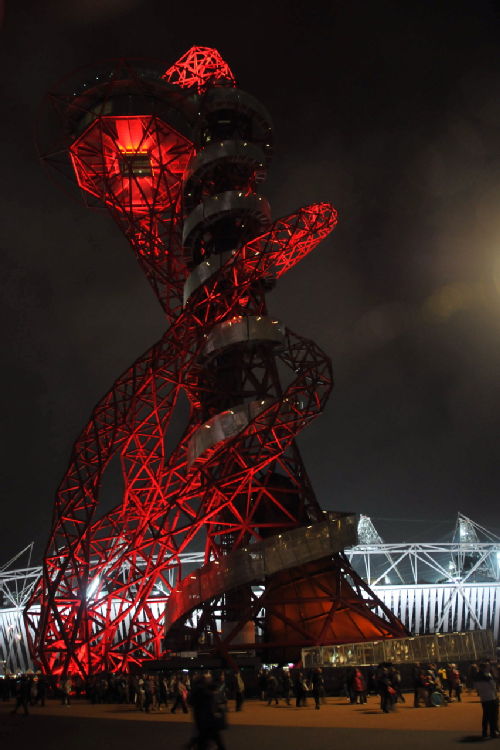 The real thing is indeed good, but having watched football, fencing and athletics I am a little underwhelmed, after so much overenthusiastic reporting in the British media (as in the BBC shouting "Ben Aisle is the best sailor in history"... how about the Vikings, Phaenicians and Columbus?). Everybody looks happy, sure, but in a somehow fake way, like in a big Disneyland. The sport has not been so great, with still no athletic record and little in terms of memorable performances or dramas. The best thing you can say of the weather and the food is that they are typically British, and of the ExCel arena is that it was already there and they did not have to build it on purpose for the Olympics. The Olympic park, while it may be better than the previous wasteland, is soulless and anonymous: it could be anywhere and it has no striking building. The velodrome and the aquatics centre are beautiful inside, but indistinct outside, while the Olympic stadium is very functional, but it deserves to be downsized into a second-tier football ground afterwards – the Polish Euro2012 stadia are much nicer, not to speak of Beijing’s Olympic Stadium. The much-acclaimed Orbit is, from the outside, so ugly that it makes you want to go up to it – from where you can see all but the Orbit itself. The presence of the sponsors is so oppressive that it makes me want to drink Pepsi. And one strange thing I noticed yesterday: the Olympic Park is actually about the only place in the UK where you cannot watch the Olympics: there are big screens only in one place, the Live Park, which is however much too small at peak times to host all curious spectators.

And indeed London, while well-organised, is far from showing vibes of excitement. On Saturday, Hyde Park's Live Site was far from full, and the race walk, which is usually through the city, was hidden away in loops of the Mall, as not to disturb Londoners.

This does not mean it is not enjoyable or that there are no gripping or exhilarating moments. At the athletics, we saw the exuberant celebrations of German discus thrower Harting, and an amazing finish of the 100m hurdles women. At the race walk we had the drama of seeing the second-placed Russian Borchin collapse in front of us at the last loop - a better collapse, in hindsight, than that of Italian Alex Schwazer, gold medal in Beijung in the 50km, caught for doping. Talking of Schwazer, he reminds the case of Ben Johnson, downgraded from "Canadian hero" to "Jamaican-born" overnight in 1988. In Italy, Schwazer has been downgraded from Italian hero to cheating Southtirolean (e.g. by La Stampa reporter Castelnuovo), while 4 years ago it was the Schützen who condemned him for celebrating with an Italian flag (and being a Carabiniere, i.e. enrolled for the occupying army). In the other direction, Murray, who was a miserable Scot when defeated at Wimbledon a month ago, is now a British icon...

Moreover, London offers so much more than sport anyway. In a break from sports we saw ‘These Associations’, Tino Seghal’s installation at Tate Modern: dozens of performers walking and running around the huge Turbine Hall, and stopping people to tell about individual lives made of uprooting and meetings. I was myself ‘chatted up’ by a performer and found this one of the most unusual artistic experiences. The work is somehow reminicent of Ai Waiwei's ones, but Tino Seghal is himself from Berlin, where I had had another unusual artistic experience that included reindeer urine). And it was somehow like the Olympics: eye-catching, cosmopolitan, and occasionally disconcerting.

PS: indeed, the Jamaican and Kenyan running exploits have now added what the London Olympics were still missing - records and memorable scenes.