I had spent some important time in Kraków and in Zakopane, in the Tatra mountains, between 1989 and 1994, but I hadn’t gone back to the former Polish capital since 2001. I am more familiar with, and partial to, the new but (Krakovians would add) ugly, rude and corrupt capital, than with the picturesque but (Warsavians would add) conservative and stingy old one. Now, Kraków is considered as a serious rival to Prague on the good and ugly sides of tourism. The Prague – Kraków comparison is actually meaningless whichever way you look at it: in the Renaissance Kraków was a capital of a major European power, while Prague had to wait until the XX century to be capital of a serious state; but then, in the XX century Krakow was no capital of anything. As a result Krakow wins hands down on Gothic and Renaissance (not just Leonardo’s Lady with an Ermine), but Prague is head and shoulders above it from the XIX Century onwards; the physical setting is also hard to compare: Prague’s is more picturesque, but Kraków has better surroundings. The competition makes some sense only on Baroque & Rococo, and I’d say it’s a draw.

Twenty years ago, exiting the pre-war Kraków Główny station I would be met with the messy state of the station square, including the ugly coach station and a variety of jumbled kiosks. In the evening, I was also struck by darkness, given the very feeble public lighting: a warning to keep my eyes well open; and in winter, by the sharp coal burning smell, from household heating and from the nearby Nowa Huta steelworks (on Nowa Huta I recommend Vera Trappman’s and Alison Stenning's research). Today, I leave the platform of the new station and directly enter a huge shopping mall, with the disappointing feeling that it’s just like in Birmingham New Street Station: what’s the point of travelling? Once out, the square is smart clean and the bus station has been moved to the other side of the railways. And on the other side of a large communist-time subway, one is immediately in the Old Town.

Here is the good surprise. Despite the stag and hen parties and the coach tours, not much has changed, and the city has kept a very clear focus on cultural tourism. Renovations have gone on, but rather than simply repainting every single inch in pastel colours as in Prague, they have focussed on the important bits as the Central Market’s Sukiennice (Cloths Market), whose first floor will be open soon. Streets and pavements still have their share of potholes, but they are not entirely covered with tables for tourists. The historical artist café Jama Michalika, whose predilection for hard currencies was visible already in 1989, hosts folk shows for tourists in the evenings, but it looks exactly as it did and remains a café-museum, with its unbelievably slow service. 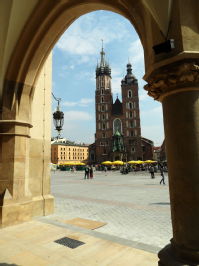 Change is more visible in the Jewish quarter, Kazimierz. In 1989 it was just derelict, Poles having little interest in Jewish heritage. Spielberg’s Schindler’s List (1993) put it on the tourist map, and cafés, restaurants and museums have multiplied since. During Schindler’s List’s production, Spielberg recruited hundreds of locals for walk-on parts for the concentration camp scenes, and offered a very attractive pay for anybody ‘Jewish looking’. Transition crisis-struck Krakovians queued for the posts but, reportedly, most of them started by saying ‘I’d like the job, but I’m not Jewish’ (by the way, I don’t think they were well selected, given how many of them looked overweight). Similarly, I doubt that any of today’s Kazimierz ‘traditional Jewish’ cafes and restaurants is actually Jewish. On the other side, if any tourist is so ignorant not to know that Kraków’s Jewish traditions were violently and radically interrupted, they deserve to be conned.

Like in Prague, food is not much value for money in tourist areas such as the Old Town and Kazimierz, but interesting places are only a couple of tram stops away, including, unthinkable 21 years ago, vegetarian or nouvelle Pologne ones. Some very good (Vega, ul. Krupnicza), some with mixed results. At the very Polish-sounding, recently opened Restauracja Kowalska, after an un-Polish sounding amuse-bouche I was recommended quail, only for the waitress, twenty minutes later, to tell me that there was no quail. Had it flown away? No, she admitted, there was ‘something wrong with it’ – which suggested the chef was incompetent either with supplies, or preparation. Worse, she went on to claim that the dish could be prepared in the same way with veal – a replacement that reminded me of shortage economy era recipes calling for ‘prawns, or in their absence frankfurter sausages’. But then at least, she asked how I wanted the veal done: in the past, nobody asked in Poland, because meat would invariably come in one way, i.e. overdone. And this time, the veal was as rare – and delicious – as I had ordered, something that happens rarely in England (I will comment another time about the ethics of veal farming and eating).

Krakow’s investment in culture is visible in a range of new museums (including Schindler’s Factory) and the New Opera, and is accompanied by more popular investment in the form of two new football stadia (Euro 2012 is approaching, although they won't play in Kraków). All this investment, combined with an efficient management of the city defence during this summer’s floods (floods make and unmake elections: ask Cimoszewicz why he lost in 1997, and Schröder why he won in 2002) gives mayor Majchrowski a near-certain re-election this Autumn. Majchrowski (last time elected for the Left) is an apparent anomaly for traditionally right-wing Kraków, but actually represents a trend in popular, independent mayors who successfully distance themselves from national politics. Majchrowski has left the party and rules with opportunistic coalitions. In April, he organised Lech Kaczyński’s state funeral and disputed burial in the Wawel castle alongside Polish kings and heroes, but since then he has carefully avoided the war of religion over the Presidential Palace’s cross that is consuming the national parties. From Kraków, it’s 110 km to Zakopane, up in the Tatra mountains. In the 1930s, the Torpeda Podhalańska locomotive, pride of Polish engineering, covered the distance in 132 minutes. Today, the train takes four hours (progress is not linear), so I took the coach. Thanks to road works and a couple of horse-powered vehicles, I arrived at the same time as the train. In the XIX-early XX Century Zakopane was considered as the cultural capital of (then inexistent as a state) Poland, being a meeting point of poets and artists. The extravagant Witkacy’s theatre is the best surviving memory of it. But now Zakopane is more and more overcrowded, and house prices 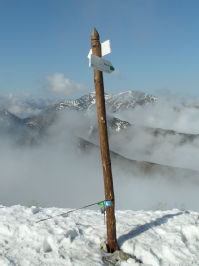 are no cheaper than in the Alps: the High Tatra do look like the Alps, but cover a very small area and are the only high mountains for a country of 40 millions (plus 5 million Slovaks: their side is a bit less crowded, and better for skiing). It’s only because of low labour costs that tourist services are still cheap: at least in September, you can get a decent room for 20 Euros, and eat well for 10. The national park fights an impossible war against path erosion. In these conditions, the enduring dream of hosting the Olympics (despite defeat for the 2006 ones) is madness: Zakopane has not enough water, enough space, and a sufficiently long downhill slope for the Olympics. But Poles are romantic dreamers, and speculators exploit this. On this occasion, heavy snowfalls prevented me to reach the summit of Świnica (2301m), but the views from walking along the ridge separating Poland from Slovakia were a sufficient compensation, only disturbed by my mobile phone continually receiving the texts "welcome to Poland", "welcome to Slovakia", "welcome to Poland", and so on.

The gastronomic pride of Zakopane is the smoked sheep cheese Oscypek, for good reason. For the rest, the little town is now full of ‘Karczmy’, fake mountain inns where waiters in traditional mountain dresses serve rather dull food, at the sound of folk music. I am left wondering what Wyspiański, the neo-romantic poet who in Wesele (The Wedding) metaphorically described the impossibility of consummating the marriage between Polish peasantry and intellectual revolutionaries, would make of the marriage of convenience that is now consummated everyday between peasantry and tourists, in Kraków and Zakopane.