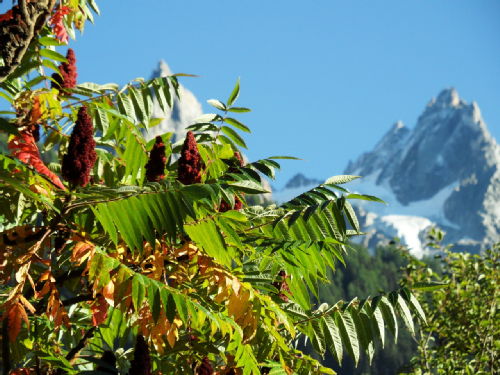 The European Sociological Conference took me to Geneva, on the week the Swiss central bank, to stop the over-valuation of the Franc, committed itself to a minimum exchange rate of 1.20 CHF per Euro. This made my stay some 8% cheaper, or, better, 8% less horribly dear. Let’s see if the Swiss Central bank has the power to do what nobody apart from the Chinese seem able to: commit to fixed exchange rates in a time of wild international speculative flows.

The price of my stay was slightly moderated by other two things. First, Switzerland entered Schengen two years ago, and the public transport is largely integrated with surrounding France, so one can just take the bus to escape to the Eurozone – the problem is that there isn’t much on the French sides. Secondly, I was staying in the Paquis, the multi-ethnic inner-city cum-red light district stacked in between rail station, UN & international district, and lake. As with many of such inner cities in Central and Northern Europe, it is livelier than the other aseptic neighbourhoods, very practical logistically, and cheaper. Switzerland has the highest share of immigrants in Europe, and it in quite a schizophrenic combination of openness and withdrawal. In successive referenda the Swiss have voted to open the labour market to the Poles (not sure the Brits would have done it, even before the crisis), and to ban minarets (notoriously dangerous weapons of mass destruction). We Italians tend to be hypersensitive of how Italian immigrants used to be treated, but Geneva at least looks to me rather welcoming. As long as you are not too poor: if you dare sleep rough or beg on the streets, Schengen or not Schengen, you are immediately arrested or repatriated.

A side-reflection for the UK: the populist press argues that it cannot enter Schengen or it will be flooded with immigrants from the rest of Europe. Well, look at Switzerland, which is much more attractive to immigrants: higher wages, more jobs (unemployment around 3%), large immigrant communities, and well, just prettier views. No flood has occurred since entering Schengen.

After the conference I was free to flee Geneva for the Mt Blanc. It’s just two hours by French train, which you catch in the extra-territorial SNCF (French railways) station of Genève Eaux Vives. There is no ticket office, nor ticket machine, nor nothing in the boarded station: it was vandalised last year and the French and Swiss cannot agree on who has to pay up, or even on how payments should be treated from a French ticket machine on Swiss soil... oh, financial globalisation can’t cope with such complex issues even in its own cradle.

Mid-September, weekdays, is the best, and nearly only window of opportunity to enjoy the famous high walks of Chamonix Valley. Until early-July there is too much snow, then too many people; and later, it will be too cold and days will be too short. In September weather can be as changeable as ever, and I was very lucky. One big storm the first night, which the my Northern Face tent, with declining waterproofness after surviving mountain storms on three continents, struggled to survive – but four glorious days to follow, with just the condensation clouds from the valley making views more interesting. 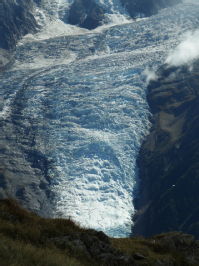 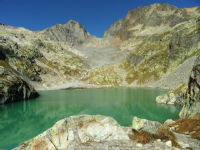 The Mt Blanc is at the intersection of three countries. I have walked and skied the Italian side many times, but only rarely ventures on the others. There is no doubt that the views are best from the Chamonix side. The summits are closer, and the North side has fourteen glaciers – even if some of them now reduced to little more than ice bucket. The best walks in the Chamonix Valley are those on its North side, i.e. not on the Mt Blanc itself, but in front of it. However, I realised, the French side is also much less natural: too many ski lifts and cableways, too many woods vandalised by ski slopes, water cannons looking at you from all corners. And now, even the little footpaths that avoided the ski slopes are taken over by Mountain bike tracks. In terms of wilderness, then, the Italian side is still a bit better: civilisation is concentrated in Courmayeur, and the ski slopes are bit further away. Under the mountain, the two valleys of Veny and Ferret are still very sparcely populated, and left to walkers and crosscountry skiers. And also, as I am at it, there is more wildlife than on the North side, and the mountain architecture is prettier. Mind you: I like skiing and I appreciate mountain bikes, but there is a limit to everything. In particular, I do not like summits to be violated by cableways. It is always a bit depressing walking and climbing up a mountain (like Mt Brevent, which also involves a small bit of Via Ferrata), just to find a cableway arrival station and a restaurant. 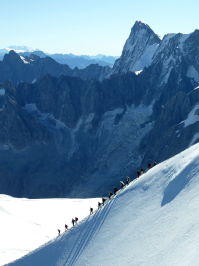 This is also the case of Aiguille de Midi (3842m) and its spectacular cableway. It originally arrived to the avant-cime (lower summit), but recently an internal lift allows to reach the real summit, just some 30mt above. A good way to make money, sure (the lift cost 3 Euro per person, and on the top there is a restaurant), but the views are exactly the same as from the lower balconies. And more, major building works are ongoing at all cable stations... I refused to take that lift, but for the first time, profiting of a cloud-free day, I splashed out (98€!) for the whole cableway crossing from Chamonix to Italy, and returned by bus. It is the most spectacular cableway in the world, made of three main segments: Chamonix-Aiguille de Midi; crossing over the glaciers to Punta Helbronner (Italian border); and on the Italian side Punta Helbronner – La Palud, with intermediate stops at two refugi. It was build just after the war, by an Italian-French consortium. No use of helicopter at that time: the cables were carried and unrolled by climbers. Which is striking not only physically but also politically: only few years earlier, winter 1944-45, the Mt Blanc was the site of the highest-level battle of World War II (a small one, but with its life toll nonetheless). The most interesting part is the middle one, the only way you will be on a glacier without needing rampons, while if (unlike me) have no reason to over to Italy for a couple of years, the descent on the Italian side is not that interesting: it is cheaper and nicer to just return from Punta Helbronner to Chamonix with a cableway return ticket. 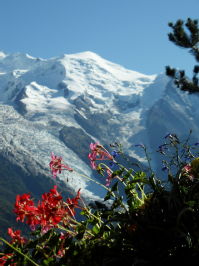 he Mt Blanc summit has been long disputed between French and Italians (compare Italian and French maps and the border is not in the same place!) but the whole cableway remains an interesting case of Italian-French collaboration. Nonetheless I could not miss that instructions and exhibition information are bilingual (Italian and French) on the Italian side, but in French only on the other... which is only partly justified by the fact that the Valle d’Aosta region on the Italian side is an autonomous, bilingual one. The Savoy region on the French side is also historically peculiar, annexed to France only in 1860 and with a more Catholic presence (in Chamonix even a huge statue of Christ King – the least républicain monument you can imagine), but it does not enjoy any administrative autonomy.

cableway allowed going from Chamonix to Courmayeur at a time when the road tunnel still did not yet exist. Although there have been accident at the cableway, the 11km tunnel built in 1965 has a worse history. In 1999, a lorry took fire causing the death of 39 people: the temperature reached 1000C and cars melt into the asphalt. The tunnel was then closed for three years for works. I remember visiting Courmayeur at that time and finding the whole valley magical: it was silent. The continuous river of lorries on the motorway, filling the valley with smog that can’t blow away, wasn’t there. Locals hoped the tunnel would never open again... The transport issue on the Alps is a very sensitive one, with currently mass violent protest against the high-speed train through Val Susa between Turin and Lyon. But surely road transport is the worse one, even if trains could well slow down over here. 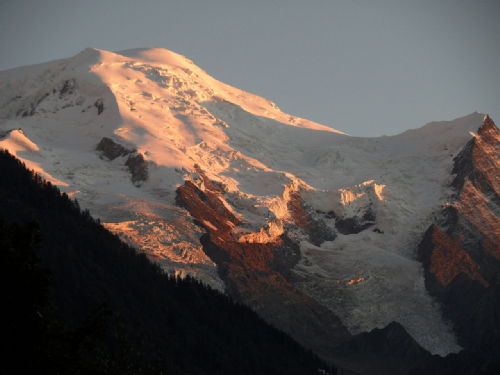