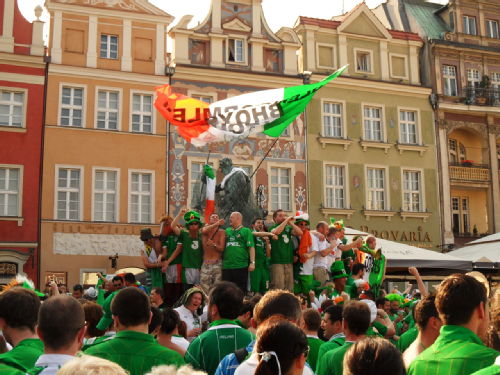 The two Euro 2012 groups playing in Poland (and the only ones I've followed so far) may have not offered the best football, but they did offer the best fans: the Irish, winners of all prizes as most popular fans, the Russians, undeservedly attacked by hooligans in what however became an occasion for most Poles to rethink their anti-Russian complexes, the colourful Spaniards, the noisy Croats, the musical Greeks, the good Czech soldiers, and of course the poor Poles, who keep singing “Polacy nic nie sie stalo” (Poles, nothing has happened). The only exception is the Italians: few and made of essentially two groups: clueless families and fascists. A few times I wished I was sitting on the other side, but at least, after last night, I can confirm the positive observation that even right-wing fans now appreciate Balotelli.

I spent much of yesterday afternoon and night in Poznan with the Irish fans. While still in a good mood, they did go through a certain involution over the last week: “you’ll never beat the Irish” became “you’ll rarely beat the Irish”, and eventually “you’ll always beet the Irish”. As the football became less and less rewarding, “stand up for the boys in green” gradually gave way to “stand up for the Polish girls” (a bit sexist: just like the various versions of “shag the queen”, not an inherently wrong concept, but space for improvement on form). By the end, they even stopped cheering Trapattoni (he had to wait until the age of 73 for conceding 9 goals in 3 games). Poznan's beer, Lech, is sold in green bottles and cans and enjoyed much favour, even more than the equally green, but weak, Calrsberg sold in the stadiums. Seeing the queues outside bottle shops in Poznan, Polish onlookers could only comment: “it’s just like under communism”.

Quite. Mass rallies on Plac Defilad in Warsaw, under the Stalinist Palace of Culture and Science, were not seen since the 1st of May marches of communist times. And Poland’s tournament, even if unsuccessful, has still been their best since… 1986.

What has changed since communism is the perception of Poland. It is, so far, a very successful tournament, all visitors visibly enjoying the perfect organisation, the new stadia and, most importantly, the beautiful cities and the landscape between them (not always the roads, but believe me, they are so much better than just ten years ago). Just like the 2010 World Cup changed the perception of South Africa from dangerous violent country to emerging world economic power, Poland now has strong ambitions of getting rid of any ‘grey’ or ‘poor’ perception. Most Poles have kept the white-red flags on their cars despite defeat. The open racism feared by the BBC has been limited so far to one Croat banana. This ‘feel-good’ effect may not last. When in 2006 Germans broke the tabu of waving their national flags during their home World Cup, the surge in national pride registered by surveys only lasted one month or two. In Poland, the bills for the stadiums, and the poverty of those who could not afford a ticket, will remain. Many companies building the stadiums (incluiding the main contractor of Warsaw's National Stadium), after cut-throat competition for the contracts, have already collapsed and failed to pay subcontractors, leaving hundreds of workers without months of hard-earned wages: like for the recent North Korea-style queen jubilee in London, should modern mass events have to rely on unpaid labour? Unpaid workers were rightly protesting at Wroclaw stadium last week.

PS I was forgetting that the Euro is about football after all. Cheers to Spaniards and Croats, who have provided the ultimate falsification of stereotypes on lower morality of Latin and Slavic people in comparison to pretendedly superior Scandinavians (see Swedish-Danish biscuit, Euro 2004). And cheers to Pirlo, but it hurts to think Milan gave it to Juventus for free last year... a karma for having previously given away Shevchenko and Kaka for trillions after their sale-by date, I suppose.