End of the journey and the blog: from European cafes to kindle?

This is my last blog. Tomorrow the academic year starts, I will be back to teaching, and I have promised my employer (and my wife) that I will be travelling much less than in the last two years – during which, even if this blog suggests the opposite, I managed to get something done, like publishing six articles and two books and a half. 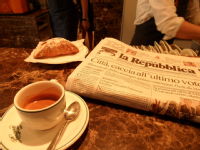 But I will of course keep a constant eye on Europe, of which Coventry, Madrid, Barcelona, Milan, Warsaw, Paris and Berlin are just mis barrios, without order of prefernce. And if I can’t be in all my barrios at the same time, I have at least found a reasonable surrogate for the pleasure of reading the daily papers of each of them, everyday – and it is not the internet, but kindle.

I am quite addicted to newspapers, which I started buying in my early teens, and I keep buying every morning. In any country I am, I have my paper, which is the most important ingredient of my breakfast (you see them listed on the bottom left). Gazeta Wyborcza was what taught me read Polish in 1989-90, and Глас Српске (unlovable but interesting) what taught me to read Cyrillic in 1997. I am so addicted that even in China in 2000, on a crisis of abstinence, I started buying the papers and look at the pictures: the only news I understood was the Concorde crash over Paris. I just need the physical and mental stimulation of holding my daily paper, everyday.

Even if I am formally faithful and never buy a second paper in a given country, I can’resist reading a bit on the side as well – and I have become increasingly attracted to papers from other countries. When I was at the European University Institute in Florence in the 1990s, the loggia overlooking the city was also the reading room for European newspapers (at that time, almost exclusively leftwing ones), and I spent so much time in an armchair there, that fellow researchers said they would put a plate with my name on it. At Warwick, the staff lounge has five daily papers which I always scrutinise, but they are all British, and foreign papers are difficult to get, expensive, and arrive a day late, good only for the chips. Of course, the internet provides 24-hour news in any language, but it is nothing like full immersion in a serious newspaper. 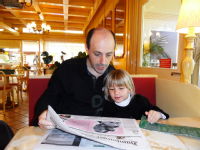 So this Spring, while in Coventry missing my Le monde in a brasserie, El País over churros and Manifesto over an espresso, I bought a basic kindle and the subscription to a few papers. Since then, when I wake up in the morning El País and Gazeta Wyborcza are already on my bedside table. By the end of breakfast or the time I arrive to work, I have also received the New York Times. And after lunch, it is time for Le monde.I do not subscribe to any German or Italian paper because the kindle choice is too narrow.

The decision wasn’t easy, because I see a lot of problems with Amazon and Kindle. Amazon has been shown to be a tax-avoider, and it is achieving such market domination that it challenges not only retailers (the lovely independent bookshops) but even the freedom of press. This is even truer for e-books: we are giving a single company a virtual monopoly on what is published. Moreover, I am not into gadgets and electronics (I was one of the last citizens of Europe to get a mobile phone and a TV - and I hardly ever use them). Yet I could see some clear strengths in the kindle.

First, unlike computers, tablets and smartphones, it is a full-immersion device: no ads, no emails, no popping windows, no sounds, no junk. Just black-and-white pages, as newspapers used to be, and without backlighting: I sit in front of a computer screen for so long for work, that the last thing I want to read a paper on is on one of them. And it is a kindle's actual advantage that it is very bad for work: pdf files are not reproduced well, and kindle-format books show no pages (how to quote them?), are messy with endnotes, and are difficult to take notes on. But exactly because it can hardly be used for work, it becomes a friendly device to enjoy – reserved to the pleasure of papers and novels. The main advantages, though, are portability (I spent hundreds of Euros in sending home hard books from various corners of Europe, but I could carry a thousand or so on the kindle), wifi instant delivery, and the feel-good factor of not chopping forests to read.

The main disadvantage is the narrow choice of papers, This is where you can see the risks of letting a private monopoly select what we can read (the choice is also extremely poor on foreign-language books: kindle is nearly as monolingual as it is monocolour). Also, after having developed over 30 years perfect newspaper-reading skills, these become nearly useless on a little screen and it is much more difficult to spot the good articles just by the titles. Some see a disadvantage in the price of subscriptions: but they are cheaper than from the newsagent, and in any case serious journalism costs and needs to be paid for – free newspapers and internet news are a threat to investigative, independent reporting.

Each of the papers I subscribe to has some disadvantage. El pais is the one with mosttechnical problems (undelivered/late issues) and misses the various interesting supplements (such as Negocios on Monday). Gazeta Wyborcza on kindle is also incomplete. Le monde is more complete but annoyingly its articles indicate the author at the end, rather than under the title: you have to scroll several screens only to see if a comment piece is by somebody you want to read from or not. The New York Times is in my view the best, with more content, pictures and features – the only thing it misses is the word number at the beginning of the article but you can still guess the length of the article from the length of the bar at the bottom of the screen. I subscribed to it because of my planned trip to America in the Summer (and in NYC its local pages were really useful) and because of the election year, but although it is a great paper I will cancel the subscription after the elections: anyway, the best stuff is reproduced in a number of European papers, including Guardian and Le monde.

While I love newspapers, I have never been into magazines: even the serious ones are in the rather useless middle ground between scientific rigour and daily journalism. I do read, caught between admiration for the neat coherent style and irritation for its ideological simplifications, The Economist, but the kindle version is very expensive and the magazine is for free in the staff lounge. The only magazines I subscribed too are therefore The London Review of Books, which needs no introduction, and Tygodnik Powszechny. The latter is the main Catholic magazine in Poland, but an open and surprisingly progressive one in a country where Catholicism is overwhelming reactionary. Founded in 1945 by Jerzy Turowicz in the intellectual capital Kraków and once the only independent paper in communist Poland, it is now directed by Fr Adam Boniecki, former director of the Polish edition of Osservatore Romano, but now a courageous critical priest whom his religious order has forbidden to speak or write, except one article per week in Tygodnik Powszechny. As always, censorship backfires and his articles’s popularity has risen to cult status. The magazine is very strong not just on religion, but also on culture (Nobel Prizes Miłosz and Szymoborska published their verses on it, and the issue on the latter after her death in February had an unmatched depth and intimacy) and on society, in Poland and the rest of Central and Eastern Europe. Over the summer three issues were dedicated to unemployment, precarious work, and gender inequality. If only the Polish mainstream Left paid the same degree of attention to these issues...

So, for the moment enough Around Europe. But maybe one day I will start Around the World.