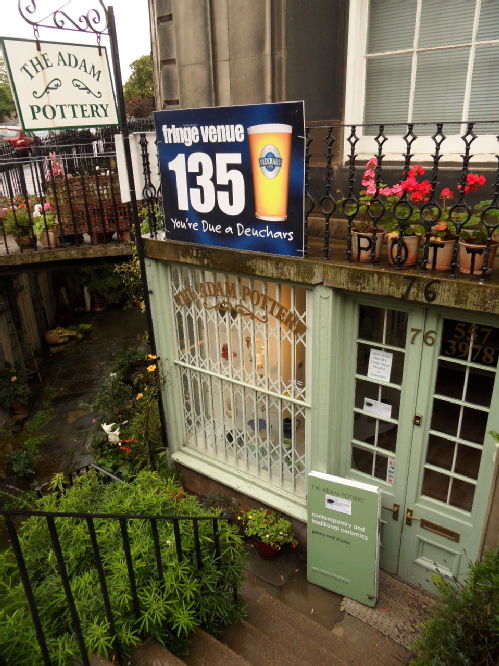 The summer festivals in Edinburgh, and in particular the Fringe, pride themselves of being the most democratic large cultural festival in the world. This year, though, they had a worse-than-usual press. First, the creeping commercialisation of the Fringe caused a sort of controversial ‘split’ (fringe’s fringe?) at the Assembly Rooms. Then the Olympics overshadowed its build-up. Finally, some stand-up comedians had the brilliant idea to joke about rape – placing themselves at the same low level as Republican wannabe senators. And in the meanwhile, the main shows received lukewarm reviews.

We spent the week-end between the main festival and the fringe, and it was worth it, even though the Scottish weather prevented us to take purt in the night walk-cum-light show Speed of Light on Arthur Seat.

No interest in stand-up comedies: with all respect to the performers, it is really a minor genre anbd a result of cost-cutting. A silly guy standing in front of an audience telling jokes on politics/sex/stereotypes - really something I can do myself at home, thanks. But we did go to two of the highlights of the International Festival, 2008: Macbeth and Meine Faire Dame, in the Royal Highland Centre – a huge hangar adjacent to Edinburgh Airport.

Macbeth was an unusual Shakespeare experience. Not so much because it was in Polish: as I had already written, on stage (as opposed to on paper) I prefer Shakespeare in translation than in English, because director and performers can only flourish outside the iron cage of verse and the burden of five centuries of previous recitations. All the more for Macbeth, which literarily is one of the least fascinating plays, with hardly any worthy speech (speeches are admittedly better in English, and an excellent solution is the one of repeating them in both the performers’ language and in English, as in Langhoff's Hamlet: A Cabaret). 2008: Macbeth is set in contemporary occupied Iraq, it was first performed in a weapon factory outside Warsaw, and experiments bravely with screens, pyrothecnics and sound effects: it really seems that a helicopter is landing. The scene is split into four quadrants and the amount of video connections makes the theatre scene as close as ever to the idea of hypertext. All this has not been appreciated by most British critics, complaining that Shakespeare does not need pyrothecnics (Daily Telegraph). What a double pointless argument: of course he does not need them. Yet Macbeth, as said, is with Titus Andronicus one of Shakespeare’s plays where action prevails over word – and the director’s art is making the most of it, and giving it a meaning. Only last year I saw Macbeth in the kingdom of Shakespearean orthodoxy, the Royal Shakespeare theatre in Stratford-upon-Avon, directed by the RSC Director Michael Boyd. Even Boyd had to innovate to get something out of Macbeth, replacing the witches with children, adding a historical shift to the Reformation and even... pyrotechnics. Yet Grzegorz Jarzyna (who in 1998, aged only 30, became director of the experimental Teatr Rozmaitosci in Warsaw) goes much further and adds much more. The ghost scene is the best of any Macbeth I have seen, the witches are scary, the whispering sounds make the rise of evil almost palpable. Moreover, the setting in Iraq is the open references to Abu Ghraib jail’s horrors add more food for thought than it is usually delivered by this play.

Given the amount of effort on the set, the actual acting is not so prominent in 2008: Macbeth, and only occasionally (as in the ghost’s scene) is Cezary Kosiński really gripping. The opposite can be said of the second show we saw, Meine Faire Dame – Ein Sprachlabor by Swiss director Christoph Marthaler. The extremely loose adaptation of My Fair Lady is not placed in some topical historical setting, but in a language laboratory of functional but grey and unfashionable 1970s’s Switzerland (which hits the memory of any Milanese who watched Italian Swiss TV in that decade). There is hardly any plot, and the little plot that is there has no logic. Moreover, there is a disconnection between sound and action, and between sounds, and between characters. It is more absurd than the theatre of absurd, which still maintains unity of time and space. But in this fragmentation of meaning, it opens an avenue for the best possible expression of actors’ talent: moving arhythmically while singing, for instance, is actually more difficult than moving rhythmically. And playing not just with different accents, but with different sounds, pronunciations, talking speeds and languages is a sort of artistic Olympics. I had my eyes wide open in admiration, when not weeping for too much laughing, for the whole 120 minutes. But British critics did not like it, expressing their indignation at the apparent lack of any meaning (Guardian).

What we saw at the Fringe was, paradoxically, much more conventional. Karen’s Way: A Kindertransport Life was a very moving play-story telling on Jewish persecution in Nazi Germany, on the difficult reception of Jewish child refugees, and oin survivers' guilt-trap feelings. It was played simultaneously by a young and a mature actor, representing the past and present of poet Karen Gershon, and in particular director-actor Vanessa Rosenthal is convinging with her German accent, contrasting with the accentless young Karen (because when young, she was actually speaking native-language German).

A more difficult, but less convincing, game with accents occurred in Sister Annunciata’s Secret, a monologue where the actress personifies a Canadian nun, but also her New Yorker and Irish interlocutors. In sum, deciphering languages and accents was important in all four plays we saw, but the experimental nature of the Swiss-German and Polish shows was the most memorable thing I took from this year’s Edinburgh. Rather than too commercial, it looked too innovative (and polyglot?) for the habits of British critics. But it is fortunate that the Edimburgh Festival, like the Olympics, are giving the world a fresher, more modern, open and attractive image of the UK than the embarassingly old-fashioned one given by royal weddings and queen's jubilees (or princely strips).