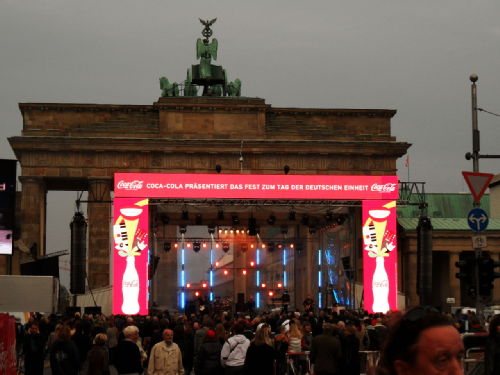 Anybody I have asked in Berlin with regard to last Sunday’s celebration of 20 years since reunification, which is also the National Day, has given me a bored look. This is not a particularly felt day: after all, reunification was the last, and mere due completion, of a series of more memorable dates, of which the Germany has just commemorated the 20 years: more significant were the fall of the Berlin Wall (9 November) and the currency reunification (the Deutsche Mark at 1-1, 1st July). So there’s fatigue, and a justified feeling that on reunification ‘everything has been said, although maybe not yet by everybody’. At the Coca-Cola sponsored Bürgerfest at Branderburger Tor, on Saturday night, there was a large crowd (but then again, with cheap beer and sausages and free music also the DDR could gather large crowds), but the mood was as relaxed as it could be.

So if there’s nothing left to say on reunification, let’s say something on the state of Germany right now. If on one side unemployment is still twice as high in the East than in the West, including within Berlin (where precise statistics are unavailable, because two of the 12 districts, Mitte and Kreuzberg-Friedrichshein, combine ex-East with ex-West areas), social problems are now very rarely presented as an East-West issue – no more, say, than they are as a North-South one in Italy, or even in the UK or Spain. For a number of reasons. First and most importantly, social inequality is deepening within the East and within the West, between new rich and new poor. Second, the token Angela Merkel successfully hides the fact that the political and economic elites are still very predominantly western. Third, the East has lost its own political voice, the PDS – its successor die Linke has quite successfully become an all-Germany party. Fourth, the large investment in reconstruction means that, on the surface, the East now looks overall much neater and freshly painted than much of the West. Finally, the current crisis has hit the West more than the East (even if overall it hasn’t hit Germany much: I often hear questions “is the crisis true or just a story?”). And then there’s obviously generational change. The old generation starts leaving the scene and East Berlin has just celebrated the funeral of one of its few democratic heroes, the artist Bärbel Bohley, while the new generation of course has other things on their minds.

So, Ostalgie is now largely left to tourist shops, and if anything, I can hear of Westalgie, especially from the West Berliners missing the alternative, and slightly unreal pre-89 status. Eastern Germans have less and less in common with each other. Karl Ulrich Meyer and Heike Solga have completed a large life course studies on them, and concluded that those more likely to have the voice to protest (people over 50 in 1989; former SED members; the young) are those who actually lost out the least from reunification, thanks to generous early retirement, cultural/social capital, or mobility. The losers were mostly women – but the assertive ones, able to protest, largely voted with their feet and went West. Thereby, they too are burying the East-West divide.