While in my recent three months of study in Spain I did not have one single day of holiday, I now finally had almost two weeks of free browsing, with H, through Catalan natural, cultural and gastronomic heritage. All while the deepening economic crisis forced Spain to a rushed constitutional reform, in a few days and without any real debate, to appease the European Central Bank and the market: the Spanish Constitution of 1978 had only been amended once before, in 1992 to implement the Maastricht Treaty, and whenever Catalans asked for amendments it was replied that it was too important to be touched without years of deliberations...

Drawing on a pinch of ancient Roman and even ancient Greek legacies, Romanesque art, now so well displayed in the re-opened wing of the MNAC, is the first ground of pride for Cataluña. In the booming first Century Catalunya was arguably the most advanced place in Europe. I like Romanesque even more than Gothic, as it actually combined with classic architectural heritage well before the Renaissance, and it merged Eastern and Western influences: it is less pretentious, but more universal and certainly more spiritually Christian than Gothic. And so is the Romanesque heritage of Catalunya, dispersed from the coast to the green Pyrenees valleys. Catalan tourist promotions tend to say that Catalan medieval villages and towns are like Tuscany, but I’d even say that this is an understatement. Many of them are even better, and while equally well-kept and somehow exclusive, they are not as posh, nor as flooded with tourists as their Tuscan counterparts, whose heyday, by the way, came a little later. The setting is also more spectacular in Catalunya, whether on the coast (the St Pere de Rodes monastery on Cap de Creu) or in the mountains. 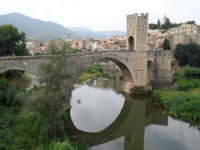 Cataluña was also strong in Gothic times, and the churches of Girona and Barcelona are impressive. But by then the centred of European art had moved north and east. This is particularly evident in the fresco painting by Ferrer Bassa in the St Michael Chapel of the Pedralbes Monastery in Barcelona: fascinating, but a long shot from the Giotto’s ones they wanted to imitate. 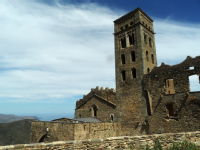 The economic success of Catalunya is very visible along the Costa Brava and inlands, but it becomes clearest when you cross the border into France – or what the Catalans call ‘Catalunya Norte’. While we are used to consider France richer than Spain, the French side of Catalunya (for the French, Roussillon) is actually poorer: while the Spanish side was the driving region of industrialisation, and produced a very rich bourgeoisie, the French one is just a rural peripheral region. Add to this the EU cohesion funds for Spain, but not for France, and possibly a better self-government in Catalunya (Sur) than the centralised French administration of Roussillom, and it becomes clear why as soon as you cross the border northwards the roads are worse, more houses are empty or run down, there is less economic activity and overall you feel going back in time. Take Prats de Melló, a pretty medieval village once linked to Melló on the South Catalan side: there are Catalan flags here too, but there is no press in Catalan language, and despite good wine and local produce, there is little of the pulsating innovation of (South) Catalan cuisine (I will get back to this in another blog). In a way, Prats is more atmospheric, exactly because not as neat and revamped as the (South) Catalan villages. But when you drive back South, admiration strikes you again. 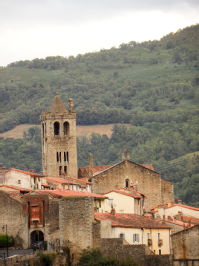 Maybe the best proof of Catalan civilisation is not even the heritage itself. It is how accessible the heritage is made. All is explained in at least three, often four languages. Even more, nearly all of the many Barcelona’s museums are accessible to disabled, including the blind, and in many cases those with learning disability. Having spent some time, long ago, accompanying learning disabled through Milan’s museums, I remember how great experiences they may be, but how little support there was – now this is starting to be available, for the benefit also of an emerging category of visitors, people with Alzheimer.

Then there’s the language. For me, fighting to get my Spanish to acceptable standards, Catalan is a bit of a turn off: written, it is perfectly intelligible, but the sound is not to my liking, although it makes a good ingredient to chansons, also thanks to its similarity to French. Still, I admire its centenary resilience and its respectable production: Jaume Cabré’s Jo Confesso is the book event of the year in Spain. His previous Les Veus de Panamo got eleven translations and sold millions across the globe, this one should also get an English one and reach the depressingly insular British bookshops.

The Catalan language, right in the days I was there, was however the target of a ruling by the Catalan High Court, deciding that Castellano should also be offered as medium language in Catalan schools. Imagine a Belgian court imposing French in Flemish schools or a Canadian one imposing English in the ones of Québec, and you can guess the uproar. All Catalan parties protested, with only the rightwing Partido Popular welcoming the ruling, which in turns threatens the Catalan ruling coalition between them and the Catalan nationalists (CiU). The Catalan government has appealed the decision and refuses to move an inch, saying that there already three hours of Castellano per week, and that anyway Catalan children already get better exam results in that language than those of many Spanish-only regions. Not only: education in Catalan is indispensible for social cohesion and to avoid the segregation of immigrants in second-class Castellano ghettoes. Castellano defenders reply that it is actually Catalan teaching that marginalises Castellan speakers, whose educational attainment in Catalunya is much lower than for Catalan native speakers. I’d say that social cohesion is more important than attainment, and long live linguistic variety. Even when it means defending the language I don’t speak.