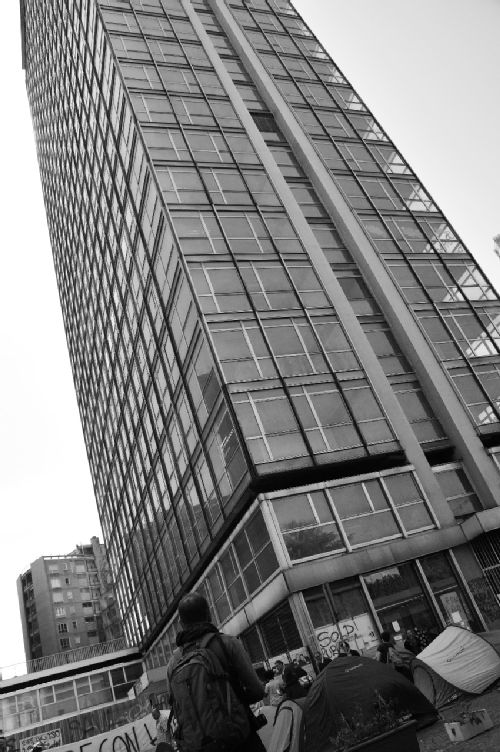 Last year, my arrival to Madrid coincided with the first demonstration of what, a few weeks later became the indignados movement. This week, my arrival to Milan, on my way to Florence, was less lucky: the clearing by the police of the occupied skyscraper Torre Galfa.

While Milan has a long history of occupying spaces, second probably to only Berlin and Copenhagen, over the last decade, under the Berlusconian version of privatisation and commodification, the occupied centri sociali have been silently disappearing, and social movements have been very shy. This Spring, finally, something fresh: at the beginning of May, the occupation of the skyscraper Torre Galfa, in the middle of the new business district. This occupation is different from those of Puerta del Sol or Wall Street. It was not of a public s[pace, and it was not primarily political. It was of a private space, and highly symbolical: skyscrapers are the architectural symbol of financial capitalism. And it was primarily creative/artistic: creating a space for ‘co-working’ of creative cultural projects in Milan, called ‘Macao’. This is itself very political, though: Milan is in many regards the cultural capital of Italy – theatres, galleries and publishers are based here -, but what was an avant-garde city decades ago has become stiff, bourgeois, conformist and very commercial. A visible cultural centre outside market logics is politically disruptive.

Macao, in its short life, received the support of leftwing mayor Pisapia and of the icon of Milanese alternative culture, Nobel Prize Dario Fo (who knows something about occupying: his occupied Villa Liberty was in the 1970s the Milanese centres of experimental theatre). However, it also received the attention of Interior Minister Annamaria Cancellieri. In a very Italian twist, her son happens to be an executive director of the developers’ company that owns the empty skyscraper, a company which has been involved in nearly all corruption scandals in Milan for the last 30 years. The very quick police intervention to clear the occupiers is therefore at least suspicious. It also raised ironic comments: the police would have got confused and cleared the wrong skyscraper – the really illegally occupied one is the adjacent Pirelli tower, seat of the regional government, which is squatting there despite a huge amount of scandals involving both ruling parties (Berlusconi’s Freedom People and the Northern League) and charges of electoral fraud.

After the evictions, the occupiers have refused Pisapia’s offer of a space in the former Ansaldo factory – a central area which should become the art and cultural district of Milan. Insisting in ‘aiming high’, they refused any compromise with the institutions, occupied the street for a while, and today moved on to occupy an empty palace, belonging to the Ministry of Culture, in the arty Brera quarter. I have taken some pictures with the occupiers under the cleared skyscrapers, but better ones had been published by... Vogue.