I owe to say something about Paris – not easy, given the tons of ink that the city attracts, and the fact that Paris, unlike Berlin and Warsaw, does not change too quickly. The time of the grands projets is gone, due to shorter presidential terms (from seven to five years: not enough to leave an inprint on time to be re-elected) and to budget restrictions. De Gaulle, Pompidou, Mitterrand left important marks; Chirac less, but still he managed to leave the Musée du Quai Branly (the ‘arts primitives’ rebaptised ‘arts primaires’) and the quite unique Citée de l’Architecture et du Patrimoine. Sarkozy – luckily – has left near-nothing besides anger in the banlieues.

To add to the feeling of immobility, these weeks, Paris was uncharacteristically mild, climatically and politically: paradoxically for the city of revolutions, it was just about the only capital where nobody was occupying anything (a timid attempt at La Défence failed, demonstrators were so few that they got lost in the huge Esplanade). Maybe because the French would never imitate what Americans do. Or more because after the traumatic experience of 1968-69, the French have chosen to always keep quiet before the elections (the next are in April-May 2012), to explode thereafter in what they call troisième tour social. 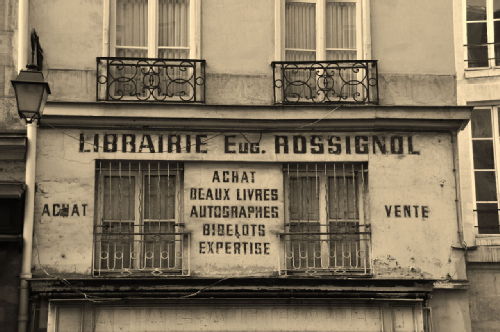 Especially little changes in the area I was staying, the Quartier Latin. Adieu imagination au pouvoir. Of course, it has changed socio-demographically since the times of Sartre or even Foucault, but much less so since the times of Meardi (the influential social theorist of mid-1990s Paris). The Quartier Latin, especially on the 6th arrondissement side towards Saint-Germain, is extremely gentrified now. It is according to the thought-and-foot provoking Paris: Quinze promenades sociologiques by Michel Pinçon and Monique Pinçon-Charlot, the area with the highest number of professionals, and the lowest number of manual workers. High-fashion shops have long replaced bars and artisans. Fortunately, bookshops resist, but there have been some painful disappearances since the times I was studying here in 1994-95.

This is arguably the place in the world with the highest concentration of books, great food, and art. In comparison to my student years I can afford, at least for three weeks, the extortionate prices of local shops. This is now the most expensive area in Paris except a few streets near the Champs-Elisées, at over 12,000€/m2 to buy and over €25/m2 to rent. Shops cater for people who can afford living here and for tourists. But at least the quality is exceptional. Round the corner, I had one of the best bakeries in the world, Gérard Mulot (Rue de Seines Quatres Vents), and a few steps further, the best in the world, Kayser (rue de l’Ancienne Comédie, or rue Monge) and of course Poilâne (rue de Cherche-Midi). Some produce is extremely expensive, but remember that the price of baguettes is politically regulated in France (like espresso's in Italy), so do buy them in the very best places, and you'll get much more for the same money. Also very close, the covered market of Saint-Germain with fantastic fish, meat and cheese, and just a bit further, even better produce at the little market and shops of Maubert-Mutualité. And on Sunday morning, the mother of all posh organic markets, on Bd Raspail. In the middle, my favourite chocolatier, the leftist-for-millionaires (a bit like the trotckist patissier of Moretti’s movies) Christian Constant (rue Assas): he spends half of the year exploring Latin America in search of the best beans, but if he is in the shop, he will be happy to engage in conversations about all aspects of cocoa, including the socio-economic ones.

With such fantastic food on sale, you can eat well at home even if you can't cook (c'est pas mon cas, bien entendu). But if you want to eat out? I was staying in front of the Palais du Luxembourg, hosting the Senate (which just swung to the Left, for the first time ever). Given that law makers, unluckily for the tax-payers, like to eat well, this has the effect of providing some very good and reliable places, not necessarily at extreme high prices. Actually, two years ago, when the government had reduced the VAT on restaurants, on condition that the owners would reduce prices, this was about the only place where they complied, advertising the lower prices clearly: the effect of being watched closely. In particular, I love the bistrot La Ferrandaise (rue de Vaugirard), according to many the best in the city, appreciate the traditional and quiet Au Bon Saint-Pourçain (rue Servandoni), and when missing the Med on a grey day, of course, there’s nothing better than La Méditerranée (place de l’Odéon), a bit old-fashion but with excellent seafood in a historical setting.

Walking a bit further, this is an area with an extreme concentration of Michelin stars, and with inflated prices. But there are a handful of honest places (L'Epigramme, rue de l'Eperon, or Le lutin dans le jardin, rue Gît-le-Coeur), and it is possible to try famous chefs’ dishes at much lower prices, especially at lunch time, by going to their second restaurants or brasseries, such as La rotisserie d’en face (rue Christine) of Jacques Cagna (his main restaurant has actually just closed) or Les bouquinistes (Quai des Grands Augustins) of Guy Savoy. And if you like them and want more, only a bit further, already in the 7th arrondissement, there is L’atelier de Joël Robuchon, where you wait and pay not so much for the food eaten at the counter, but for the privilege of having a view of the kitchen and of a new generation of chefs learning from the most precise master in the world (for instance, the Roca brothers went through here).

Plenty of places where to drink a glass too, of course, like the alternative-looking Bar Dix on Rue de l’Odeon, or the intimate La crémerie (Rue Quatre Vents), with its very idiosyncratic, but interesting, owner.

And the famous cafés? I do not like Parisian cafés particularly, unless they come with intellectually stimulating encounters. Bad coffee, limited food choice, appaling service, exaggerated prices, cramped tables - and you meet more Italian tourists than philosophers. Also, since the crisis and quality collapse of Libération, there is hardly any newspaper worth reading in the morning in Paris and therefore little reason to stop in a café (Le monde, also in crisis but still oustanding, comes out in the afternoon: better read in a brasserie). For cafés, not only central Europe, but even Madrid and Lisbon are better than Paris. Although nowhere matches Italy on this front. Time to go to Milan!