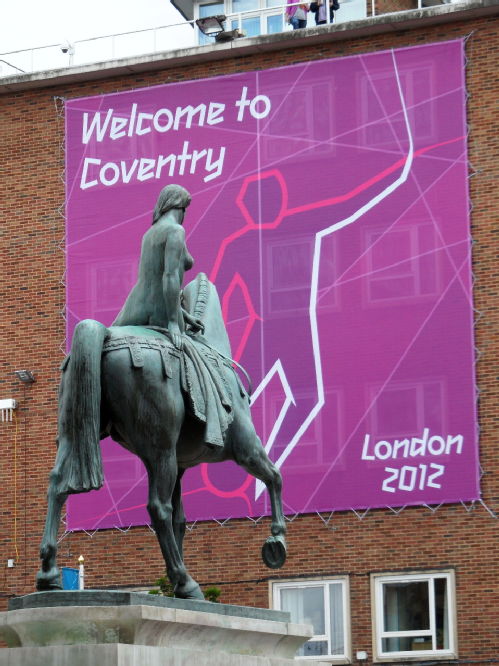 The Olympic Games - if only with the football matches - in Coventry: it must be the first time that there is some sort of world news involving this city since the beginning of the Millennium. On Sunday, I went to the male football in the City of Coventry stadium, usually called Ricoh arena but renamed for the Olympics due to the strict sponsoring rules, a place where I had been a couple of times to see poor Coventry City and always struggled to keep awake. Coventry City was relegated from the Premier League, after 34 years of honourable survival in the top fight, during my first year here, and this year, devastated by speculative hedge fund investors, was relegated further to League One (third league). So the Olympics are a welcome counterbalance to the long social, economic and sport decline of this city: Gabon-Mexico and South Korea-Switzerland were not memorable, but an improvement on the usual local standards. And on Friday I will go again for the female quarterfinal Great Britain - Canada, which should be exciting (should I support Quebec or Scotland?).

There is also some art involved: the Godiva Awakes project linked to the Olympics is quite impressive and on Sunday I saw the pretty gigantic heroin's marionette, which will cycle all the way to London: it was good, nice and cheerful as people are here, but the grey weather and the even greyer backgrounds were a bit sad and did not impress the few foreign visitors and fans who attended.

Similar feelings for Danny Boyle's opening ceremony in London, which I watched on TV with other 27m spectators in the country. Lovely and cheerful indeed, with all the good things I like of Britain: social history, the NHS, pop music, Akram Kahn, Simon Rattle, self-deprecating humour, cinema, Shakespeare, children literature. But also a bit sad indeed: if Beijing's opening ceremony was all triumph and onwards-looking, London's was all nostalgia and backward-looking. The NHS and British culture have been very good thing, but they are being massacred by the current government. And the whole country is in decline, with the third-worst economic performance in the world (in $) since the beginning of the recession and the worst Chancellor in human memory. Some fools hope the Olympics may help the economy: in fact, data from the last ten Olympics show, if the Olympics help, it is only before the game, with the construction boom; afterwards, it is rather anti-climax and doom - a bit like Coventry City after they built the new stadium.