All entries for Wednesday 26 October 2011

Football in Central Eastern Europe has some cultural specificities, rooted in a more artisan style, political subtitles under communism, lower incidence of media and sponsors, and stronger oral traditions – see the instructive ‘Behind the Curtain: Travels in Eastern European Football’ by Jonathan Wilson. With westernisation, much has changed, but sometimes in unexpected directions. 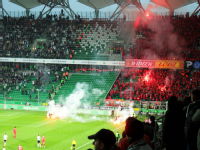 When I was in Poland in the 1990s I was tempted to go watch the football, but never actually went despite the very cheap tickets. The level of the game was disappointing but especially the fans were not recommendable. Not because in Poland there were more violent hooligans than in Italy in absolute terms – if any, the opposite would be true. The problem was the ratio: in my home town's San Siro, there would be maybe 1,000 potentially violent hooligans, hidden among 80,000 totally (well, almost totally) normal people; it is enough to know some basic geography of the stadium and you don’t have anything to worry about. In a Polish stadium, there will still be just 1,000 potentially violent hooligans – but only 500 ‘normal’ spectators...

Things have moved on. Sportwise, Polish football is still in dire straits and does not remember the great team that arrived third in the World Cups of 1974 and 1982. Over the last twelve European or World Cups, Poland has qualified only three times, and even then has always gone out immediately. They did qualify for Euro 2012 – but as hosts. The clubs are even worse, given that the best Polish players have gone the same way as the plumbers - abroad. No Polish team has qualified for the Champions League in sixteen years. Add to this regular corruption scandals and there is not much to enjoy.

But in terms of attendance things have moved on, although not necessarily improved. In the last few years a few modern stadia have been built – for Euro 2012 but also for the richest clubs like Wisła Kraków and Legia Warszawa. They are very rarely full, but still attendance, and ticket prices, have increased a lot, together with the average income in the country. 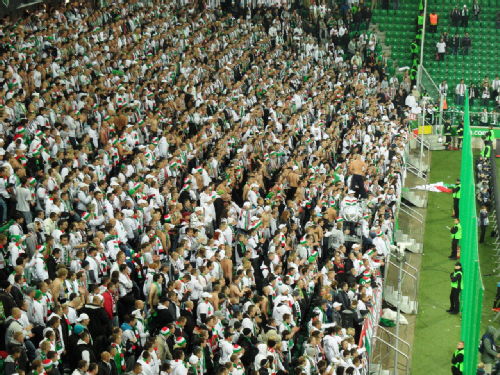 More recently , football fans (kibice or in slang kibole) have also become a political actor. As in many countries, they are permeated with extreme right groups, but the novelty is that in Poland they have unanimously organised in support of one party (the rightwing Law and Justice, PiS), or, more precisely, against one party (the ruling liberal Civic Platform, PO), responsible for heavier policing in and around the stadia, but also not sufficiently ‘patriotic’. In the last election campaign, the liberal prime minister undertook a bus campaign journey throughout the country – and everywhere he would be met up by organised football fans disrupting his events and shouting ‘Tusk, ty matole, rząd obalą ci kibole!’ ('Tusk, you fool, these fans bring down the government’). The Right, on its side, started idealising football fans as an example of modern patriotism. Senator Romaszewski, a famous former dissident, even compared the football fans beaten by the police to the workers of Radom and Ursus violently repressed by communist security forces in 1976. One week before the election, when a police car killed a fan in Zielona Góra at the end of a speedway match (speedway is nearly as popular as football in Poland), the tension reached dangerous levels.

However, if football fans may have brought a few thousands votes to Kaczyński’s party, they lost many more to him. In the last election of the campaign, PO broadcasted a TV ad showing violent football hooligans in action and concluding ‘they go to vote – and you?’. According to surveys, the main reason why voters abandoned Law and Justice was the football fans. To stay in football talk, the fans scored an own goal of massive proportions.

On Sunday I went to see Legia Warszawa – Widzew Łódź. In the mid-nineties this was the decisive match for the title, but since then the two teams followed the economic fate of their cities: Warsaw's wealthy modernity is reflected by the new stadium in the beautiful Łazienki park, while Łódź is depressed, fighting to avoid relegation in an old stadium in decay. Still, the rivalry between the two largest Polish cities is very strong and Łódź is still often labelled as ‘Jewish’ by fans of other cities. Legia’s are particularly nationalist and anti-semitic: last month, in the Europe Cup match against Hapoel tel Aviv they exposed a large green banner ‘Jihad Legia’, and around the stadium Ku Klux Klan signs started to appear. There have been some cases of violence too. The shameful peak was reached by the Legia fans three weeks ago: they went to a match of the youngest team of Warsaw rivals Polonia, just to verbally abuse and physically threaten them: a team of nine-year old kids had to run in tears from the pitch to the changing room and be protected by the police...

This Sunday was not so bad fortunately. The specificity of Polish fans is that they shout rhythmically without any interruption, but they have an extremely limited vocabulary – which, on the positive side, means that I did not hear any racist slogan. The impression is that the large majority has absolutely no clue about politics.

Polish fans seem to have gone through a sort of specific natural evolution determined by their specific natural environment. Given that the quality of the game is so poor (a 2-0 with just three shot on goal, on a Sunday afternoon when, elsewhere, Balotelli was destroying United and Milan was recovering from 0-3 to 4-3), the fans have developed the special attitude of not caring at all about what happens on the pitch. They only care about themselves and, possibly, the opposite fans and the police. Goal opportunities, missed balls, referee decisions would not affect the level of noise in the match. They keep shouting in the same way regardless of whether the result is 0-0, 0-3 or 3-0 – a quality which actually gained them the title of best fans at Euro 2008, and has been recently admired by Manchester City fans who adopted the customs of Lech Poznań’s ones. A second natural evolution of football fans in Poland is resistance to low temperatures. On a very cold autumn Sunday, when Legia eventually scored (the only events that they seem to notice), a good number of them threw their white Legia shirt away, remaining happily topless for the rest of the match while I was freezing despite two sweaters (and in Poland they don’t sell Glühwein like in the German stadia).

There was indeed one change of attitude of the fans during the match, but not related to football. Five minutes into the game, when Legia's players first reached the opposite end of the pitch, they were met by intensive fireworks fire from Łódź fans. The match was stopped for a few minutes and security forces reacted by charging the visiting fans and forcing them further away from the pitch. At that point the Legia end, in political solidarity with their counterparts, changed the target of their insults from the visitors to the police, and the hitherto uninterrupted ‘Łódzka kurwa’ roar was replaced by the slightly more sophisticated ‘jebać policię – kurwo zostaw kibica’ (sorry, I can’t translate these ones, without violating University rules on obscene language and having this blog shut down immediately).

The fans are not just a problem for Kaczyński – they also are for the football clubs, who unsuccessfully attempt to attract the middle classes in the new stadia (especially through prices, already higher than in Germany and Italy although much lower than in the UK and Spain). There is an intrinsic contradiction, though, between the methods used to control the hooligans and the aim at attracting new fans and their families, willing to spend more money and cause less trouble. As in Italy, Polish authorities have had the bad idea of enforcing compulsory ‘team fan cards’ to control who enters the stadion. This segregates fans from the beginning into ‘tribes’, and constitutes a barrier to the occasional neutral fan. I had to get this card in Italy for AC Milan, and I was a bit annoyed to be forced to get one also for Legia Warsaw, a team I do not support (I prefer Polonia Warsaw, and the KKK signs are at odds with my life promise that I would only support Inter Milan the day they play against the Ku Klux Klan). At least, the Polish card is made instantly by just showing an ID card, unlike the Italian one that, like everything in that country, needs a mountain of paperwork and a long wait. Most of all, however, I miss the informal, Volksfest style of German stadia, and the less tribal setting of Italian stadia in the 1980s. I remember seeing a few Milan – Napoli back then (how do I remember? you don’t forget Diego Armando Maradona), and the fun of bartering with the numerous Napoli fans sitting around, given the large population of immigrants from Naples in Milan. Variety is lost, homogeneity has been enforced – in Poland, even politically.