A very short trip to Budapest and Warsaw. In Budapest, not enough time for the best things, music and the Turkish baths - but the whole city was a sort of Turkish bath of humid heat. Just the time to check that the food and wine are as good as they used to be in 2004, when I spent two months in the city – but not enough time, fortunately, to suffer from what was arguably also the unhealthiest of world cuisines until McDonald’s was founded. I am not sure how many other countries have recipes including fat cuts of meat, oil, butter and lard – and then accompany the dish with generous helpings of cream.

Unhealthy and spicy are also Hungarian politics, with prime minister Viktor Orbán, who in 2002 had modelled his electoral campaign on Berlusconi’s, outdoing his model and achieving unprecedented peaks of authoritarian populism. Thanks to a 2/3 majority in Parliament he could steamroll a new Constitution and new laws allowing the government to control the media and the other state’s institutions, and awarding citizenship to millions Hungarians abroad – at risk of destabilising Romania and Slovakia. Now, he abandoned his social populism (in the past he conceded 50% wage increases and contested healthcare privatisation) to start with tough austerity measures (the country is nearly bankrupt after years of right- and leftwing populism). There are some protests, in particular by police and firefighters against the removal of their early retirement, but the political orientation of them is at least ambiguous (a Israeli flag was burnt in the last demo). Interestingly, among Orbán's targets there are multinational companies. The Hungarian love story with foreign investors may be reaching the end: the 1990s’ nickname of ‘GE-Country’ has been replaced by ‘Orbanistan’. 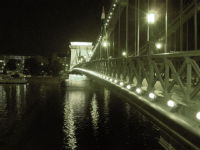 After Budapest, a short stop in Warsaw was a relief not just because the heat was milder and drier. Poland has avoided the worst of financiarisation and skipped the recession and already moved on from the worst of national populism (the Kaczynski brothers’ rule of 2005-07). Politics is bland but getting ‘normal’: on Wednesday Solidarity organised a national protest against the anti-social policy of the liberal government. Tens of thousands took parts. Not so many in comparison with the West, but at least no Israeli flag was burnt.

Now I am back to Madrid. The #spanishrevolution, which after the end of the ban has no immediate goal left, is nearly over, and it is now the Right to make its voice heard, after a clear victory in the local elections (it reminds of De Gaulle's electoral victory after May 1968, and Fanfani's after the Italian autunno caldo). But the #spanishrevolution has spread a lot of seeds over the internet – even in Budapest and Warsaw they were talking about it, with a bit of envy.