I am spending a month in Warsaw, staying on the 14th floor of one o the 19 identical huge blocks of the city’s most famous communist council estate in the capital, Za Zielazną Bramą ('Behind the Iron Gate'). It is like living on an open contemporary history book, in continuous updating. 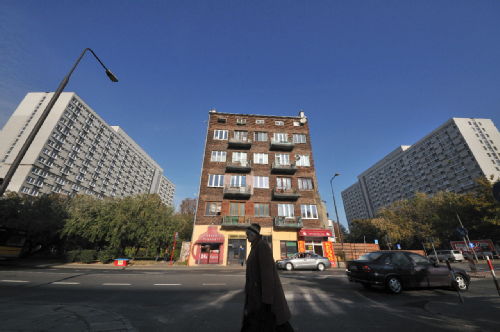 The estate was built in the early 1970s on the ruins of the Warsaw Ghetto, where in 1940-1943 over one million Jews were packed and then sent to Treblinka. Just as Krakow’s Ghetto of Kazimierz has been put on the tourist map by Spielberg’s Schindler’s List, the Warsaw Ghetto has been shown to the world’s public by Polanski’s The Pianist. The difference is, however, that Kazimierz still exist and Schindler’s List was filmed there, while there is virtually no building left of the Warsaw Ghetto: The Pianist was filmed in Potsdam, Eastern Germany (it is nonetheless a superior film to Schindler’s List, although not entirely faithful to Szpilman’s own book). The Ghetto was destroyed during the revolt of 1943, possibly the greatest expression of human dignity ever: more than Szpilman’s book (who was hiding and did not take part in the revolt himself), I recommend the account by the surviving revolt’s leader Marek Edelman, a protagonist of Warsaw history for the following sixty-six years (he died two years ago), whom I had the honour to have a coffee with in 2005.

Before the war, three points of this area were possibly the liveliest of the whole Warsaw: Chłodna Street with its shops and nightlife, Plac Grzybowski with its craftsmen shops, and the market halls of Hala Mirowska. The little that survived of them went into decay after the war, and only over the last year Chłodna Street and Plac Grzybowski have been revamped. It is now the round of the only Ghetto street which had not been destroyed, but was now in total decay, Ulica Prożna. In some points, the place of the former Ghetto wall has been marked in the pavement, in the same way as it has been done in Berlin for ‘their’ wall. On Ulica Chłodna, which with its tramways in 1940-43 cut the Ghetto into two halves but remained non-Jewish, a monument marks the position of the outrageous bridge which in 1940-43 allowed Jews to move between the two parts of the Ghetto without entering in contact with the non Jewish population in the street below them. Moreover, the Jewish centre, the Synagogue and the Jewish theatre are increasingly important presences not only for Israeli visitors, but for the city. 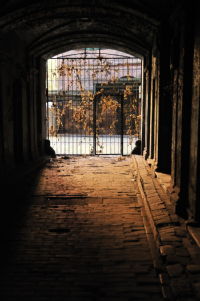 The estate Za Zielazną Bramą that was built in 1965-72 on the ruins of the ‘small Ghetto’ is quite unfamous, just like with all low-income estates (e.g. mine in Coventry). To many, it represents brutalist communist architecture at its worst, and its flats are notoriously small. People do not want to live in such places anymore, despite the excellent central locations, and those who managed to leave were replaced during the 1980s and 1990s by many Vietnamese, in what may become the first ethnic inner city in Poland. However, such fame is not entirely deserved. As architect Jarosław Trybuś writes in his ‘Guide to Warsaw blocs’ (Przewodnik po warszawskich blokowiskach, 2011), this estate was the most ambitious attempt in the whole of Europe to realise Le Corbusier's utopian ideas on council houses (think his famous buildings in Marseille). The nineteen blocs are put in geometric order so that they do never look cramped. In fact, they were immersed in large green space, which back under communism was filled by parks, playgrounds, communal services. The entrance halls are spacious and bright, each bloc with its little internal shop (I like buying the newspaper for breakfast without having to go out). 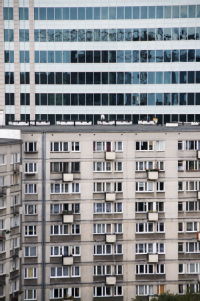 The problem is that history moved on and we now have a third life for this area: the financial district. Skyscrapers and luxury hotels grow like mushrooms, in between the old communist blocs. In the remaining space, playgrounds become private kindergarten and parks become car parks: the effect is an increasingly cramped unique architectural and urban mess: 5-star hotels and financial institutions headquarters looking directly into poor flats. One may wonder why developers do not take the blocs down and, given the very prime locations, replace them with much priceier buildings. But the blocs are built in cast concrete and would be the only buildings in Warsaw to resist a nuclear attack: they are going to stay. At the moment there are mostly old residents who can’t afford anything better and Vietnamese immigrants, but over time, with some modernisation, they could become ideal one-bedroom flats for the emerging young cosmopolitan ‘professionals’ (like my neighbour: a Greek chef).

Something which is changing very slowly, fortunately, is the Hala Mirowska market. The XIX century halls, after war destructions and communist-time defacement, host some old stalls and two old-fashioned supermarkets. All around, there is a vibrant market with great fresh vegetables, cakes, cooked and fresh meats, flowers, some fish. It is not as spectacular as the Spanish markets, but it is more lively. It was here that Margaret Thatcher, on her official visit in 1988, ostentatiously went to buy some grocery surrounded by photographs, to show that the market was the way. But over two decades of market reforms later, Hala Mirowska suffers from British presence: that of Tesco. A proper market needs regulations, not Margaret Thatcher...