All entries for Thursday 23 September 2010 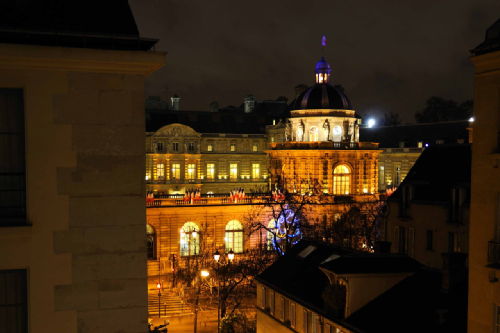 Paris is the one city in Europe I return to most happily since the time I was a poor student there in 1994-95, if for no other reason that I had accumulated a long list of things I could not afford but I promised myself for the future. And in recent times I was lucky to be able to stay in the empty flat of S, which in the middle of the VI district and in front of the Palais du Luxembourg is the optimal base for catching up with the most plaisant side of the city (the picture, from the living room´s window, is from last December, not from this week, as the Christmas tree betrays).

But this is not the time to write about vin, chocolat, haute cuisine, marchés, théatre, arts, livres, cafés, musique, and not even of lively things such as le vélib, les mouvements de grève, les "affaires", voire la fusion des Verts avec Europe-Ecologie. I do have to write about the expulsions of the Roma.

At the EU level, the Commission has started a hard game by announancing an infraction procedure and with the strong-worded criticism by Commissioner Reding (a European Commissioner trying to display moral outrage by raising her voice and hitting the table is a very weird sight). The backlash from the big capitals has been immediate: the French commissioner will vote no to the procedure, Berlusconi has reiterated his proposal that nobody, except his friend Barroso, should be allowed to speak officially for the Commission. Among the things that unite Sarkozy, Merkel and Berlusconi, is the annoyance with any public interference from the Commission, which for them only exxists as scapegoat for the policies they want to implement, but do not want to be seen as responsible for (for Cameron it is different: it is not that he likes the Commission to speak, but more simply that he does not care for what it says anyway). With the pressure from the European capitals mounting on the Commission, but little space for a shameful withdrawal after such a public statement, it is not clear where the Commission will find the political power to push anything against France further.

But this is not just an intra-EU issue. The main problematic aspect with the expulsion of Bulgarian and Romanian Roma is not, in my view, that it is of EU citizens. Unfortunately, the concept of EU citizenship, unlike what is being often argued, does not include a right of residence anywhere in the country. It is a concept of economic citizenship, not of social citizenship. We can move and stay in another member state for 3 months, but after then we must demonstrate to be "active", whether at work or through study or at least as consumers of accumulated money (the Nordic pensioners in Spain). In addition, the Romanians and Bulgarians have also their right to work abroad strictly limited until 2014. (I recommend the critique of the economically instrumental EU conception of free movement developed by Giovanni Orlandini and Stefano Giubboni in "La libera circolazione dei lavoratori nell´Unione Europea", Il Mulino 2007). So EU Roma do not have an unlimited right to stay. Interestingly, the Romanian government (let's not forget the anti-Roma feelings within Romania) has not protested, limiting itself to ask the French to "try to stop" the epulsions. The Italian and Czech governments are with Sarkozy, having themselves repatriated EU Roma.

The problem with France is that neither has the French government the right to expel whoever they like after 3 months of stay. Each case, according to the 2004 Directive on free movement, has to be valued individually, each EU citizen must be informed in writing, and have a month time to appeal. And above all repatriation, as an extreme remedy, must be proportional to the damage caused by the individual EU citizen, not by his/her ethnic group. That's what France has not done in its decree of the 5th of August, and the fact that the majority Roma have been paid to go home "voluntarily"changes nothing: it was still an ethnic targeting with insufficient attention to the individual cases.

But if this is the main problem, then EU citizenship becomes rather secondary, because such safeguards as considering individual cases and allowing the time for appeal should apply to any foreigner, from the EU or from without. Many more EU countries than just France and Italy repatriate non-EU Roma, and the legality, let alone humanity, of such procedure is disputable. Fortunately, Germany, where I have just arrived from Paris, is abandoning the repatriations of Roma refugees to Kosovo it had started earlier in the year, as if Kosovo were now a safe state for everybody. And in France the "Touche pas à mon pote" mouvement is vocal (in direct continuity with that against Pasqua when I was a student 16 years ago).

So the issue is eminently political, ethical, cultural - not just legal. The point is whether or not Europe wants to know something about the Roma (a starting point is the participant picture of Central and Eastern European Romas in Isabel Fonseca´s "Bury Me Standing", 1996). Or whether it wants to subscribe to an inhumane false sociology that, in perfect Front National style, draws from some spurious data the conclusion that all members of certain migrants are dangerous. The alleged link migration-crime is actually dismantled in the UK by B. Bell et al ("Crime and Immigration: Evidence from Large Immigrant Waves", IZA Discussion Paper 4996, 2010), and in France by D. Fougère et al. ("Youth Unemployment and Crime in France", Journal of the European Economic Association, sept 2009).

And on this political issue the mainstream Left is not clear. It was nice to listen to PS-leader Martine Aubry (in an inspired way so different from Commissioner Vivien Reding's) remind that "les Roms, en France, ils sont chez eux!", but that was counterblanced by her predecessor François Hollande playing the game of the Right by ambigously blaming the French rightwing governments for having accepted Romania into the EU in 2007 - as if suggesting that the Left would have kept them out...