PSG & the rise of the French far right

Polish football “chuligani” (I love Polish spelling and declination of English words, one of my favourite being “hot dogi”, reminiscent of Venetian history) scored one more political own goal on the 11th of November, Polish national day (Independence). They took part in an extreme right demonstration, turned it into a major guerrilla with the police who stood between them and antifascist demonstrators... and maybe, hopefully, from next year these traditional 11th of November neo-fascist marchs will be banned. The Polish Right still defends them, including the newspaper Rzeczpospolita, which used to be very serious... and their crisis goes on. 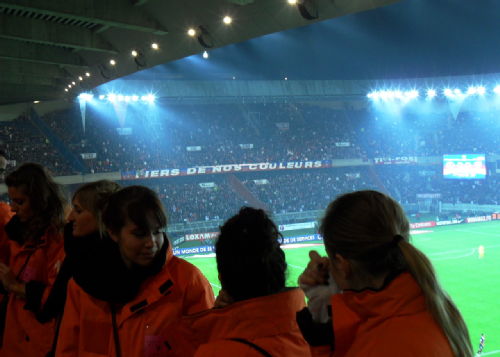 The Boulogne end of the Parc des Princes took the name of Kop of Boulogne in the 1970s, imitating Liverpool’s fans, and it became increasingly infiltrated with neo-nazi skin-heads. But the weird stuff started in the 1990s, when Paris Saint-Germain (PSG) actively promoted its matches to wider groups (sounds like educational “widening participation” policies...), by handing out discounted tickets to the other end, Auteuil. The Auteuil end became popular with ethnic minorities... ooohps, you can’t use such racial wording in France: youth of African and especially North African descent. Tough rivalry between the Kop of Boulogne and the Virage Auteuil quickly developed. Since then, the intriguing specificity of PSG’s fans is that they spend more time fighting against each other, than fighting against other teams’ counterparts.

Things went increasingly nasty during the last ten years, with major accidents such as during PSG-Hapoel Tel Aviv in 2006, with anti-semite aggressions and one Kop Of Boulogne fan killed by a police bullet. After further violence in 2008 Sarkozy even threatened to dissolve the club. Recent years saw major ‘security plans’ being introduced. While, unlike in Italy and Poland, no compulsory ‘fan ID card’ has been introduced, photographic identification is required to attend the two ends. Fans obviously protested against the changes, Auteuil's even going on strike for a while. Many fans moved away from the two ends, to the Paris stand. A part of Auteuil fans have moved to the H blue stand, where I watched first-of-the-league PSG against second-from-bottom Nancy. Nancy won 1-0, and in the H stand they were not happy, although still mostly busy with chanting the name of popular manager Kambouaré, threatened with sacking, and replacement with Ancelotti, by the new owners (from Qatar) and new director Leonardo. Auteuil's defence of Kambouaré looks like resistance against new foreign plutocrats, by the best of black France... ooops, you can’t use this word in France: a citoyen from Nouvelle Calédonie. I must say that in no football stadium in Europe I have seen such a melting pot as in the Parc des Princes, nicely contrasting with the frightening whiteness of many British stadia.

And the extreme right? The Front National was directly accused of involvement in the 2006 accidents during PSG-Hapoel Tel Aviv, but nowadays, it tries hard to present a more respectable face: unlike the Polish right, it avoids being mixed with nazi-skins and hooligans, although it keeps a paramilitary ‘security service’. The problem is that this strategy seems to be rewarding. Opinion polls put the new leader Marine Le Pen at 15-20% ahead of April’s presidential election. This could allow her to improve the record result of her father: 17% in 2002 and a surprising qualification to the second round. Ahead of that election, polls put Jean-Marie Le Pen at only 8-10%, because half of his voters were too ashamed to confess voting for him. Marine Le Pen appears as more ‘respectable’, so one hopes this 15-20% corresponds to all actual support and she will not double the forecast on voting day. But this respectability makes her more dangerous: in fact she is miming very well Sarkozy 2007, and the differences between the two are more and more blurred...