Gothenburg, as a post-industrial harbour city, tells a similar story of gentrification, tourism, private services to East London, Hamburg, Copenhagen, Barcelona - and one that Gdanks, Napoli or Genova would like to tell too. It's a glossy, triumphalistic story of getting ever cleaner - but which has its dark side of exclusion and removal. The Haga ex-working class district, for instance, is an Islington in miniature and a near-pure ideal type of post-industrial gentrification + tourism. 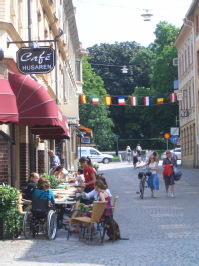 The 'Gothenburg's spirit' of trade, business and private donation for culture and philantropy has combined for a while with Swedish social democracy, into a particularly pragmatic, and outward looking, version of it. The ambitious public housing programs of the 1960s, in particular, destroyed the long-existing working class solidarities by dis- and re-placing the population.

Volvo, with its large factory in the North of the city, is one important influence, sponsoring for instance the film festival. The 'strong man of Gothenburg' Göran Johansson, socialdemocrat former unionist at SKF and for four decades mayor or otherwise prominent politician, is another one. Together, they have combined in a particularly moderate version of the Saltsjöbad spirit (the 1938 'founding' compromise between unions and employers). 'Budget dinners' between socialdemocrats administrators and business people in expensive restaurants exemplified this local version of 'corporatism'.

Also, Gothenburg is particular in its particularly ruthless revision of the Saltsjöbad spirit since the 1990s. The success of Gothenburg as an 'entrepreneurial city', 'event area' and 'knowledge centre' has also involved increased segregation and inequality - particularly visible in the case of ethnic minorities, but with also an increasingly visible class dimension. Gothenburg is not just the place of big sport events, concerts and congresses. It is also where, on the 30th of October 1998, 63 young people from the suburbs and mostly with immigrant background died in a fire during a party in an immigration association's venue. In 2009, for the first time, there have been ethnic riots - if incomparably smaller than the French ones. Also the apparently consensual environment issue actually has a deepening conflictual side, with acts of resistance and mobilisation including sabotage of SUV (nice idea if you ask me, but I imagine the difficulty of building alliances with Volvo workers).

So Gothenburg is very Swedish and socialdemocratic - but more so, for good and evil. Scandinavian countries are actually those, in Europe, with the biggest social relative disadvantage for immigrants, youth, disabled (although, in absolute terms, these groups are better off in Scandinavia than in most other EU countries - but then, they are more likely to compare themselves to the locals, than to their peers somewhere else). The frequently mentioned reason is skills (or lack thereof), ever more important in the knowledge economy. Yet skills don't fall from the sky and are themselves the product of a social system, which can include and exclude.

Gothenburg now attracts business, trade and Ryanair tourists. And Sweden is now referred to as a model not by the Left, but by the Right: the Tories keep referring to Sweden with regard to how to cut the deficit fast (Sweden did it rather safely in the 1990s, but starting from a much richer welfare state and therefore without so much pain: it had the luxury to ring-fence expenditure on higher education and research, instead of health), and to the free schools (but even in Sweden, these increased segregation, without overall improvement in standards, according to research by Susanne Wilborg of the Institute of Education). Let's finish with movie images of Sweden. With regard to society and social history, two movies taught me a lot about Sweden (OK, I have not watched many more, even if Nordic cinema is among the very best). "Kitchen Stories" is actually a Norwegian movie (Salmer Fra Kjokkenet, by Bent Hamer, 2003), but it describes an amazing research program of the Swedish Home Research Institute's scientists in the 1950s: introducing ergonomy into private kitchens, starting from sending dozen of observers into a sample of bachelors' houses, to sit on high chairs in the corner of their kitchen to collect statistics on their physical movements - on the assumption that men must be more efficient than housewives. In the name of positivist science, the observers were forbidden to interact or even speak to the observed, while staying in their kitchen for weeks on. On this 'objectively' exhilarating base, Hamer builds a comedy drama at typically Nordic slow pace, which offers lots of reflection material not just on state control, but also on researcher-researched relations. Btw, IKEA is the side effect of that very research program.

The second movie is "Everlasting Moments" (Maria Larssons eviga ögonblick, by Jan Troell, 2008), a biopic of Swedish female photographer Maria Larssons in the 1910s-20s. In its structure, the movie is just a traditional linear historical movie, rather didascalic. But it adds original insights on the power of photography and of choosing images through a lens (it reminds at times Kieslowski's masterpiece Camera Buff [Amator]), as well as reflection on the Swedish working class, Swedish women and Swedish religious morality before socialdemocratic emancipation - which with all its limits, let's admit it, was still a pretty good thing.