The Supreme Court has confirmed the decision of the juncta 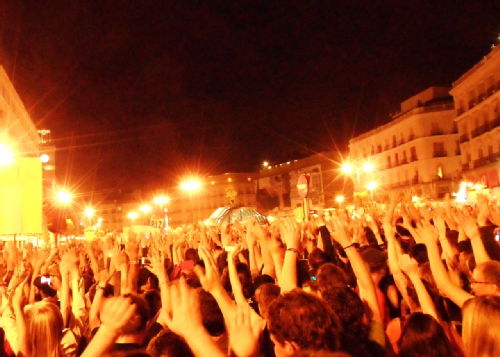 electoral (election authority): from midnight on Friday, the demonstrations are illegal, because of the obligation of political silence (day of reflection) on the vote’s eve. Were it because of some Franquist legacy or just because the law profession is still dominated by conservative upper classes, legal authorities in Spain have a strong inclination for provocative intransigence: whether by banning Basque parties on mere suspicion of links to ETA, by rejecting the Catalan Statute approved by 90% in a referendum, or by banning demonstrations on technicalities, their effect is always radicalising the mobilisation. In a way we have to thank them.

So on Friday evening the crowd is bigger than ever. At least 40,000 people jammed in the square, and more in the adjacent streets – the transition between demonstration and Madrid’s movida nightlife is far from clear cut. At Midnight, when the big watch of the Town hall marks Midnight (something Madrid people celebrate on the 31 December, usually) a minute of silence, with a tape on the mouth, waving hands. And then a huge cheers: somos todos ilegales, ‘we are all illegal’. Which is an appropriate inclusive motto, as one of the emerging demands of this movement is rights for undocumented immigrants. Their vulnerability has been highlighted by the earthquake in Lorca last week: 80% of those left without home are immigrants, mostly undocumented.

The police is so aware of the impossibility of clearing Puerta del Sol, and the other 50 occupied squares across Spain, that it has virtually disappeared, after having kept a visible presence until yesterday. And there’s no point waiting for late night: on week-ends Puerta del Sol does not go to sleep anyway, even without demonstrations. The disappearance of the state is so striking that it even raises the question of whether they hope in some trouble: the overcrowding of a square with just few narrow streets as way outs is a safety hazard.

Even if the movement may decide to stop after having reached the goal of lasting until Sunday, the indignation of a large part of Spanish population is now a fact. For over two years, here and elsewhere, governments have thought that they could smoothly manage the crisis in a socially regressive way: it looked just too technical for people to understand and protest, except the ‘usual suspect’ Portuguese and Greek leftist groups. It is no longer true. Trichet, Bernanke, Cameron, Merkel: take note.