On sociopedia.isa's hack: how bad are publishing houses?

On the evening of the 13th of July I was, as from the blog entry, at Eddie Webster's reception and therefore not at the concomitant reception for the inauguration of sociopedia.isa, the on-line sociological encyclopedia. That reception was disrupted by a protest against publisher SAGE and the fact that sociopedia, an initiative of the International Sociological Association, will not be free for all, as sociological knowledge arguably should. The protest is described and explained in other blogs, e.g. by a Gothenburg's doctoral researcher.

Now, it happens that I like protests, don't particularly like publishers, but I am also the author of a sociopedia entry, who signed off the copyright to SAGE, and even a member of its editorial board. So I have a duty to explain what I think about it.

I was invited to join sociopedia, still an underground clandestine idea, by Michel Wieviorka (ISA president) in a private conversation in September 2007 in Zielona Gora, Poland, at the margins of the Polish Sociological Congress. I liked the idea of something in the wide gulf between wikipedia and a paper encyclopedia (a gulf where students tend to get lost) and accepted. The proposal had to be kept secret until confirmed that viable, in order to avoid burning it, and the aim was inaugurating at Gothenburg 2010. The idea proceeded quite slowly, as one can imagine given the size of the undertaking: we academics take years to write little articles, how can we write an encyclopedia in a few months? I can imagine that the technical difficulties pushed the ISA, towards the end, to turn to SAGE (who already publishes the ISA journal's Current Sociology) for help. Eventually the 13th July deadline was met, but with just 18 entries (the target was 50), including mine.

There is no doubt that this is a collective failure: ISA, who does not need SAGE for recognition, has not managed the job on time with its own resources. Michel Wieviorka, the promoter of the thing, did not attend the reception himself so I can only deduct that he was not so enthusiastic himself. But I have also to admit that if I had been asked to do the editing job SAGE did, I would not have done it. I don't have the time to edit this blog, imagine sociopedia entries. Editorial work is something that, within division of labour, we have grown used to leave to private companies. So if we criticise sociopedia for being restricted-access, then we should do the same for Current Sociology, or Work, Employment and Society (also a SAGE journal, of which I am on the editorial board but I have never seen protests that it isn't for free - although I heard complaints on specific publisher's policies), or any other journal, given that nowadays the print copies are rather redundant and we could do it all for free on the internet.

In the specific case, the protest is therefore a little unfair: not just sociopedia, but most academic publications come from public bodies but are 'sold out' to the devil publishers. Yet the broader issue it raised, about copyright and commodification of (publicly-funded) knowledge in the internet era is a real one. So any attempt at opening spaces for decommodified knowledge is welcome, even if we can't burn publishers down (yet). Some little heroes are already starting the work of free-access on-line journals - and let me mention as example, again, Eddie Webster thanks to his new Global Labour Journal. Small countries can actually be interesting - and may even try to become big.

The rightwing populist SVP or Swiss People's Party, which happens to be the largest Swiss party, has submitted a parliamentary motion to introduce such constitutional changes, that would allow neighbouring regions to join Switzerland as new cantoons. They mentioned, as potential candidates, a number of regions for a total of 17m people (as against 8m inhabitants of the current 'small' Switzerland). Look at the map to see the cancer-like shape of the future country. 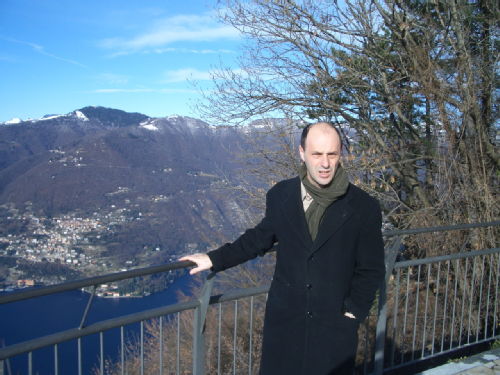 This happened last month and don't worry: nothing to fear. But what is interesting is that having had a look at dicussion fora from the neighbouring countries, the self-selected population commenting is overwhelmingly in favour of the idea and seems to long to swap Roma/Wien/Berlin/Paris for Bern. Vorarbelg, after all, had actually tried to join Switzerland in 1919, Südtirol's identity is most definitely not Italian, Alsace's not-so-French. And, from a SVP point of view, the candidate regions, while differing in the federal language they speak, share a strong inclination for the populist Right, whether the Lega Nord, die FPÖ, die Republikaner or Le Front National. In prospective Canton Como some look confused, though (picture).

In 1866, the First Workingmen's (sic) International Association held its first Congress in Geneva. Now in the same country internationalism is promoted by bankers and somebody shouts Populisten aller Länder, vereinigt euch...