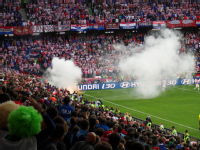 Poznan is one of the most dynamic cities in Poland, radically changed since the times I went there as a visiting student in 1989. It is one of the most western in both geographic and socio-economic terms. Which also means that on Thursday, it was full of cars with German registrations but Croat flags… There are more Italians than Croats in Germany, but clearly they are either lazier or, having been in Germany for much longer, less keen on expressing their national pride.

Croatia is a young nation and pride is even more important for them. On the packed tramway from the old town to the stadium I was about the only Italian in a sea of White-Red chessboards… who started to jump with an intensity close to bring the tramway off the rails, while singing ‘tko ne skaca pravoslavni je’: who doesn’t jump is orthodox. Not very relevant on a day match against Italy. But I knew that: when in Travnik, Bosnia, in 2008 as a election international observer, on one evening I was eating some cevapcici in a bar. A group of local (i.e. Bosnian-Croat) youth stared at the way I was eating and then asked why I was not eating the mountain of row onion accompanying the meat – a clear sign that I was a stranger, a rare one in that corner of Bosnia. Once learnt I was Italian, visibly unhappy (Italy had an ambiguously pro-Serbian stand during the Bosnian war), they asked me to make the sign of the cross. This is when my Catholic education came to hand, and I did it the "right" way (left-to-right), earning me the locals’ enthusiastic appreciation –(in Travnik they clearly didn't know that the probability of finding an Italian Orthodox are etremely low). They even offered me a glass for a toast to the pope, adding that ‘we are all Catholic here’… Which was true in Travnik East, but only because the Muslims had either ended in mass graves, or been expelled to Travnik West. Three years earlier, I could imagine, my unexpected drinkmates were fighting. But things have moved on a lot, especially in Croatia, and Zagreb is probably one of the most liberal and open cities in Central Europe – although Croat Bosnia and rural Croatia, especially if affected by the war, less so. And I still have the unpleasant feeling of remembering that some of their hooligans, like the Serbs, were also active in the paramilitary forces in the 1990s.

Although my knowledge of Serb-Croat (sorry Croats, Bosniaks and Serbs, but it does look like one language to me) is very limited, I could often understand the Croats in the tramway and later in the stadium. The youngest ones, while singing in Croat, spoke to each other in German: they are no ‘Integrationsverweigener’. Some also spoke Italian, either because from largely Italian-speaking Istria or because of having spent time in Italy. And in the stadium, they were often singing insults in Italian, thanks to the strong links of love-hate between Croat and Italian hooligans. The Italian fans are too illiterate linguistically to be able to answer – and towards the end of the match were also too depressed.

Apparently some Croat fans booed Balotelli, and one threw a banana. I did not hear or see any racist tone, though, all Croats I saw were all friendly and hopefully, despite the negative efforts of a bit of the Italian right who want to equate fascist crimes and Yugoslavian crimes against Italians at the end of the war, the bad times may be at the end. What I am sure of is that, in both two opening matches, Italian fans supported Balotelli unanimously, and not for instrumental reasons given that he clearly disappointed on the pitch: the time when a part of Italy booed the first black Italy player are definitely over (we have come really last on that: even Poland and Croatia have had black players for longer, and easily got over that).