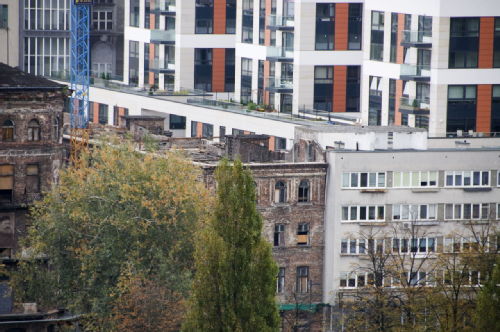 The Brave New World club-cafe of leftwing group Krytyka Polityczna, an oasis of free criticism in Warsaw's downtown I frequently pop in to (and one of the most interesting cultural cafes in Europe), is again under threat. The current rent of the historic New World's cafe is due to expire, and the association has succefully bid for another space, the former Menora restaurant on Plac Grzybowski - the centre of the former Jewish Ghetto, which is now being regenerated. It is less central than the current location, a bit further away from the University, but still a great place: actually, Brave New World is exactly what is needed to bring back to life a square that has become sleepy and neglected.

In an insult to the rule of law, the local authority have declared the tender won by Brave New World void and reopened it, with the requirement that any activity should be focussed on Jewish traditions - in the previous tender, there was no mention of them. This selective rediscovery of Jewish Warsaw is nothing more than a pretext to exclude a politically and culturally fastidious presence.

Polish cultural and political personalities, from Baumann and Holland to Mazowiecki and Kwasniewski, have signed a petition in defence of Brave New World (Wspanialy Nowy Swiat). I can't find an English version, but I guess it will appear soon on the London's virtual site of Krytyka Polityczna.