All entries for Saturday 12 November 2011

I have noticed that Saint-Denis is not even mentioned in the majority of foreign tourist guides of Paris – despite being the nearest of all out-of-town destinations, on the way to the airport, and hosting one of the most important monuments of the whole of the France, the Basilique - and the Stade de France. The Basilique de Saint-Denis, formerly Abbey, now Cathedral, is a gothic masterpiece. Maybe not as monumental as Notre Dame de Paris, not as charming as Chartes Cathedral, not as precious as the Sainte-Chapelle; but a masterpiece nonetheless and built before them, by the visionary Abbé Suger, and therefore, in a way, more important for architectural history; only a couple of decades earlier, the style was Romanesque: see Saint-Germain-des-Prés for contrast. So , unlike in central Paris or Versailles, no tourist crowds, and the visitors are in large majority French – on the 11th of November, bank holiday, mostly families with children needing to revise their history lessons. 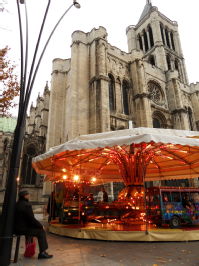 And what a place for revising history. Besides architectural history, the Basilica is an open book of sculpture history, and above all of French history. Here are the tombs of all but three French kings, covered by statues that show the evolution of sculpture from the Middle Ages to the neoclassic. The most beautiful are the Gothic ones, surprisingly realistic and human. Then, when French kings took the bad habit of invading Italy, there are the renaissance ones, including classic architectural elements. The Bourbons stopped the habit of monumental tombs, but after the 1815 Restauration Louis XVIII recovered the bodies of Louis XVI and Marie-Antoinette and with ostentatious pump erected a monument to them too – with still their heads on. The cathedral currently hosts also the photographic portraits of the tombs by Antoine Schneck, which highlight the human dimension of the works, and also their human-like sensitivity to time and their perishable elements, starting from the noses.

The reason why Saint-Denis is not popular is outside the Basilique. This is a poor banlieu, strongly working class. The Plaine Saint-Denis was in the 1960s one of the largest industrial areas in the world (here they say the largest, but I don’t believe such hyperbolic statements). In the 1950s it hosted slums of Portuguese and North-African immigrants, of the kind portrayed in the recent, much disputed movie Hors-la-loi. Nowadays a very large part of the population is of African (North or West) descent. Politically, Saint-Denis has been uninterruptedly communist since 1944 – and to give an idea of how hegemonic the Left is, the city council opposition is... socialist. Saint-Denis even hosted the offices of the communist newspaper L’Humanité, an impressive building by Niemeyer, which the newspaper, in dire financial straits, had to sell last year. 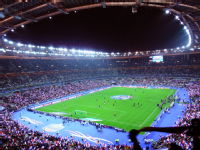 Despite its poverty and its bad reputation (highest crime rate in the Paris region, riots in 2005), Sant-Denis is not unpleasant, though, with the largest market in the whole region and, unsurprisingly a wide range of ethnic shops and ethnic food outlets.

Where one the factories were, since the World Cup 1998 there is the Stade de France, now surrounded with office buildings. It hosted a Football World Cup Final as well as a Rugby World Cup Final, but also riots in the occasion of a France- Algeria friendly in 2001. I went to see the friendly match between two mediocre football nations, France – USA, a boring 1-0. The stadium was nearly full. The first two terraces were full of white fans and tricouleur flags, but where I was, up in the third, cheapest (10€) terrace, the large majority were of black and Arab descent. At the minute of silence for WWI Remembrance, only the first two terraces stood up. But also the last one was silent, except very isolated whistles. And during the match all supported the bleus, even the fans carrying out-of-place Algerian flags, although maybe with a preference for the players of foreign descent, who are anyway the majority. An acceptable degree of intégration républicaine, I would say, despite the economic inequality.