Ending the Euro–Tour in America

With the end of June, officially, my 2-year research Tour of Europe has ended. I will keep this blog alive during the Summer, to report on local events (Olympics, Edinburgh Festival) and on a trip to Portugal, as well as the new unavoidable instalments of the Eurocrisis. But from October I will be back to teaching, take on more administrative tasks and all typing energies will need to be channelled to academic writing (apprently, this blog does not count as research publication). Not that anyone would be interested in a blog on Around Coventry, anyway.

And where did I end my 24-month European Tour? I thought of the Arc de Triomphe as in the Tour the France or Piazza del Duomo as in Giro d’Italia, and I inquired about the Olympic Stadium in London as in the Olympic marathon. But in order not to be partial among European countries, I eventually concluded outside Europe entirely, in its sociological mirror: the USA. Bar a passing touch-base on the Asian side of Istanbul, I had spent my two years entirely within the old continent. From a global perspective, I have stayed put in my little comfortable hole the whole time.

Despite the heat, it was worth spending 10 days on the East Coast and taking some healthy distance from Europe, without however really breaking away from it. The first stop was in Boston, as European as the States can get. I really realised I was in America on the second morning, when having breakfast in the same (European-style) cafe as the day before, and the waitress welcomed me with a loud, smiley “oh, hello! how are you todaaaay?! Same coffee as usual?” In Paris or Vienna, it takes 40 years to get the same degree of personal warmth from a cafe waiter as I had achieved by ordering two breakfasts in Boston.

It was in Boston that I could observe and discuss important news, from Europe where a hard-bargaining super-Mario Monti gained new money for the European South – oops, sorry, for the banks with debts in the European South, and from the US with the confusing Supreme Court’s ruling on Obamacare. It was amusing to observe Romney attacking Obamacare from Massuchussets, the same state where he introduced an identical reform... The ruling looks like a Pyrrhic victory for Obama: the penalties for not taking insurance are low and ineffective, having the law rejected on commerce rules undermines any improvement, and having it upheld as a tax does not make it popular. And again on Euronews, I was in a very mobilised North End (Little Italy) on the 1st of July for the Euro final – I prefer to remember the semifinal, which I watched in a sport bar in the company of, among others, the influential German professor... and I was surprised by how easily I could win an argument with him. 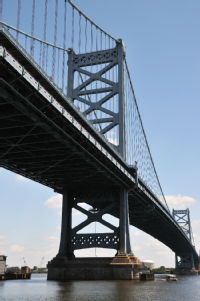 After Boston, a slow train journey away, it was the time of the much more American Philadelphia, spot on for the 4th of July. The heat didn’t prevent me to explore a bit, despite a busy schedule. At the Constitution Centre, arguably the largest and most important civic education facility in the world, there was an exhibition on Bruce Springsteen, ‘From Asbury Park to the Promised Land’ – it was meant about his link with the American polity, but somehow Woodie Guthrie’s influence was forgotten and the Boss’ recent more political songs were ignored. The US were in a much better light on the night of the 4th of July, with half a million people, of all colours, attending the concert and fireworks, peaceful, respectful and relaxed – they even did not mind having their pictures taken. America at its impressive best – shame that it won’t last like this for more than one night, and even during that night there three people were shot on the next street...

On the previous night, after a meal in Chinatown, I had had the brilliant idea of convincing a couple of friends to head to Northern Liberties, a reportedly lively alternative area with good live music. I had grossly miscalculated American distances and a 10-minute walk became a very long journey through the worst neighbourhoods of North Philadelphia. It was all fun in a way, although some became slightly concerned when two homeless blokes we asked for directions told us that they would avoid the neighbourhood we were entering... 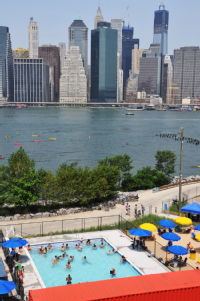 Finally, I had 48 hours spare in New York, a place with which I hold a strong love/hate relationship due to old scores, and which in July is definitely not at its best. I stayed in beautiful black, and now more precisely black middle class Harlem, but music clubs were emptyish and tired (anyway, in the jazz/blues ones the only blacks are on stage - better with hip-hop, but I didn't make it to the big festival in Brooklyn). To escape the heat I wondered around some museums, Harlem Studio’s (excellent exhibit on the Caribbean), the MOMA (exhibits on photography, on fellow Italian, but even more fellow world citizen Alghiero Boetti, and most notably ‘Foreclosed: Rehousing the American Dream’, a timely reflection of the architectural and social disaster of the suburbs and on their alternatives) and the Met (all, more, but best?). The heat in New York tempted me to try the just opened new 1,500 people McCarren swimming pool complex in Brooklyn. Mind you, it is a public, free swimming pool complex: even America, sometimes, needs some important public, free services.

But I am already back to rainy England. Already missing the sun and the enthusiasm, but not really the food: after ten days of American diet I do not want to see a hamburger or a steak sandwich (the cheesesteaks of Philadelphia in particular) for at least a year. Of course, there are lots of alternatives in that land of opportunity. In Boston I had lobster in all shapes, which was fun even though the North Atlantic lobster is just a poor relative of the majestic Mediterranean lobster I used to have as a child as Sunday lunch at my granny’s in Sicily. In Philadelphia I spent time getting lost in the extremely varied Reading Terminal food market, and in New York you can eat as good food as anywhere. But still, behind its freedom and diversity, the American dream, even gastronomically, suffers from some serious imbalances.