Thoughts on a normal president in not–so normal times 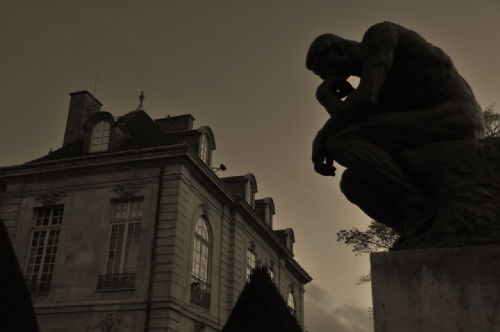 If François Hollande wanted to remind of the François Mitterrand moment of 31 years ago, despite his best efforts and nearly exactly the same score of 51.7%, the common background only underline the striking differences. The square itself has changed, after Mitterrand himself built the immense Opéra, in my view a symbol of his ambitious, often spectacular but ultimately failed attempt to democratise French culture. The quartier Bastille has changed too, largely sanitised and gentrified. But zoom into the crowds. As huge and as conscious of the grandeur of its revolutionary tradition as in 1981, the 2012 one is different. While in 1981 it sung L‘internationale, this time a very timid attempt at it in a corner of the square was bottled by La marseillaise and the stage sound system. But while in 1981 the flags were red and tricouleurs, in 2012 a number of disaparate ones have appeared, with the Algerian ones in particular (like in the Stade de France when France plays). Whether they like it or not, the République may have become less internationalist, but it has also become quite multicultural.

The 1981 victory was a real climax, as the opinion polls were too close to call. This time, the defeat of Sarkozy has been expected for so long, that the only surprising thing was the narrowness of the gap. And Mitterrand’s charisma was so strong that he actually did not need to go to Bastille. Hollande’s best asset, instead, has been to look and act normal. In other words, Mitterrand was bigger than the stage – but yesterday the disproportion was between the grandeur of the setting, and the normalcy of the performer. Indeed, his opponent was not normal. I started disliking him already in 1995, when I was in Paris during that presidential campaign, the one Jospin lost with honour (unlike 7 years later). In 1995, the young Nicolas stabbed his mentor Chirac in the back to support the other righting candidate Balladur, who was ahead in the polls – the only good thing of Chirac then winning was the subsequent punishment of Sarkozy. Who was once more opportunistic in 2005, exploiting the No referendum to the European Constitution against Balladur and, again, Chirac. And as a president he has been neurotic in acting and inconclusive in ruling: he will be probably the only V Republic president not to leave a mark. Despite this, I must say that in the last televised debate Sarkozy was more impressive than Hollande: he even managed to look convincing when saying that German success is a success of his ideas (shame that the Germans actually respect trade unions and collective bargaining).

The results of the first round add to the feeling of anticlimax. The high score of Le Pen, and the good but not as high as hoped score of leftist Mélenchon may have strong consequences for French politics. If results are similar in the parliamentary elections of June (which is far from unavoidable), the Left Party will have a very small representation and the Socialist Party may have a comfortable majority alone. This may open the doors to a very moderate government. I keep hoping in two women, Martine Aubry as prime minister and Marisol Touraine as social affairs minister, but there is the risk that, to appease the markets, more moderate socialists will get the posts. And the consequences may be deep for the Right too: for the first time, a large number of Front National candidates might reach 12.5% and qualify for the second round. This will be a disaster for Sarkozy’s party UMP, which would face a disaster in the second round... unless it comes to an agreement with the FN. It sounds absurd, and both Fillon and Raffarin seem opposed to it, but other rightwingers have started saying that Marin Le Pen is not her father, and 70% of UMP and FN voters are in favour of an alliance (Ipsos opinio poll, yesterday)... In any case, this is the historic opportunity for the French extreme right to be ‘legitimised’ – what the Italian one achieved in 1993, with Berlusconi’s compliments.

Talking of extreme Right, one mention of the worst of all, the Greek neonazi Golden Dawn, who entered parliament with 7%. Xenophobia in Greece had up top now more a funnythan scary aspect, but it is turning really nasty. The Greek election night was much more thrilling than the French one. Early results indicated a narrow seat majority for the ‘pro-bailout’ parties (PASOK and ND), but a closer look at the Ministry of Interior website’s data (every now and then, having studied ancient Greek turns useful) revealed that cities were well behind in vote counting. And in cities these two parties scored particularly badly – eventually, ND and PASOK only reached 149 seats out of 300. I expect that external pressure will force at least some MPs of the ND break-away Independent Greeks to join the government, but in any case it will not be an easy time for Greece, and for Europe, if the bailout agreement is not renegotiated soon. So-called anti-politics is ripe, as seen in Germany and Italy in this same intensive electoral week-end. The Piratenpartei has entered the Parliament of Schleswig-Holstein, and the comedian “5 Star Movement” has overtaken Berlusconi’s party (itself a comedian party, if you think about it) in many Italian large cities, while, once again, leftist candidates overtake the mainstream Democratic Party. I don’t fancy either the Piratenpartei or Beppe Grillo, but maybe these kinds of populism are a better temporary safety valve than the extreme Right. It is up to people like Hollande, now, not to waste time.