All entries for Tuesday 07 February 2012

Italian food is a tricky topic for me. I don’t share the gastronomic chauvinism of the majority of my compatriots (as attenuation, it is one of the least harmful forms of chauvinism, although no more clever than the others). The risk of being stripped of my passport for admitting that Italian food and wine are not the best in the world does not scare me at all. However, I am not immune to the ‘Proustian’ turn of world gastronomy, where the ambition is to reproduce granny dishes with extreme faith to taste, but new techniques (the most genial realisation is by the Roca brothers in Girona). So when I go to Italy I do instinctively look for the Italian equivalent of madelaines.

Fortunately in this regard, Italian gastronomy has been extremely successful in sticking to the tradition. So successful that it is even a unique case of economic success in a country approaching bankruptcy: Italian food exports keep increasing by 10% a year, as if they were German machinery. But this comes at the cost of innovation, and Italian cuisine, in the last twenty years, has fallen well behind the Spanish one. 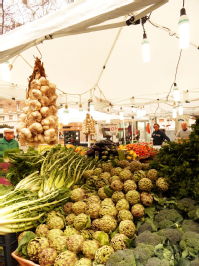 The good side of traditionalism is best expressed by the ‘slow food’ movement. Its protection of endangered produce through "garrisons" is laudable – and has successfully moved from the local to the global. Yet if I look at La Cucina Italiana and Gambero Rosso, the two serious food Italian magazines, I am struck by a process of commodification of tradition: if on one side I would be charmed if a restaurant reproduced the dishes of my granny (without any chauvinism, the best cook ever – fact), I am not so sure that I want to see a price on it. The Gambero Rosso’s trajectory is particularly telling. It was born in 1986 as the food supplement of the leftist newspaper il Manifesto, in close connection with ARCIgola, the association that gave birth to the slow food movement. I remember, at that time, ideological disputes on whether it is acceptable for communists to spend more than 20,000 Lira (about 20 Euros at today’s prices) on a meal (Rossana Rossanda argued that it isn’t). 25 years on, it is as commercial as any food magazine, with even a TV Channel that shows international chef series. Yet while the TV Channel is indeed a dumbing down function (a dubbed Jamie Oliver showing Italians how to cook pasta!), the magazine has kept all its seriousness, contrasting with the humour, but also superficiality, of Anglosaxon gastronomic publications, but to the point of stiffness. Even new techniques like sous-vide are presented to defend the orthodoxy in terms of ingredients and flavours, a bit like the Catholic Church was fast to embrace new communication technologies to disseminate its dogmas.

Conservatorism is most visible in the refusal to embrace ideas and ingredients from abroad. While this avoids some monstrosities of (con-)‘fusion’ cuisine, it is a historical nonsense for a country that owes its culinary achievements not to the gluttony of its aristocracy, but to the discoveries of its explorers and even more the influences of its innumerable invaders, from the Arabs to the Spaniards and the Austrians. Yet chauvinism now blocks external influences. Until a few years ago, there were strikingly for ethnic restaurants in Italy. As a student in Florence in the mid-1990s I remember finding only one non-Italian restaurant in town (Chinese). More recently, politicians, especially the xenophobic Northern League but occasionally also leftwing administrators, have contributed to this state of affairs forbidding non-traditional restaurants in historical city centres (while the only thing which was needed is a ban of fast-food chains).

During the last two months in Italy I noticed the walls of the Italian cuisine’s fortezza starting to crumble. Numbers of ethnic restaurants keep increasing. This is mostly concentrated in the most cosmopolitan place, Milan, not only in terms of numbers (ethnic restaurants are 12% of the total in Milan, as against 4% in Turin and 8% in Rome), but in terms of significance: outside Milan, the majority of ethnic eateries are nothing more than cheap kebab outlets, but under the Duomo you can find fantastic Japanese, African and Latin American cuisine. In addition, foreigners penetrate the fortezza from within. In Milan, already in the 1990s Egyptians made up the large majority of pizzaioli. In the 2000s, they started owning the pizzerias. Now they are starting changing the menu.

The process of culinary cross-fertilisation is still in its infancy and prone to In the Same Pizzeria-Restaurant near Porta Romana I tried the Pizza Egiziana, and I received a good pizza with falafel on the top. I like falafel more than pizza, but their texture, look and taste could not combine at all with pizza, remaining like alien asteroids on a fertile planet's surface - I was tempted to wrap it all up to pretend it was a falafel sandwich. In the old suburb of Rogoredo, the local Osteria de Rogored is kept its dialect name, old decor and strictly Milanese menu – but it is now Chinese-run, just like the old bar on the other side of the road. The restaurant is, with its good portions, warm and quick service, and unbelievably low prices, very popular with locals – but the risotto is made with Chinese rice instead of Arborio, resulting in disastrous texture...

The most successful cases of hybridisation are then on safe and well-beaten paths of the border regions: couscous in Sicily, Austrian-Italian combinations in South Tyrol, and French-Italian ones in Piedmont. Turin, with its Francophone royal family and its Napoleonic alliances, makes the most of French influences, for instance in chocolate. Piedmont is not by chance the place of birth of slow food, and the region with best Italian reds. The best meal of my stay (caused by the events at Fiat) was probably at Scannabue in a pretty but unassuming old square off the city centre, where the young chefs combine French influences with the best traditional recipes of the Kingdom of Piedmont (including Liguria and Sardinia). Their bravery was evident in the wine list, where, in contrast to the defensive protectionism of many Italian restaurants, both Piedmontese and French wines were very well represented (and very honestly priced). So I could drink a lyrically profound Barbaresco out of choice, and not of duty. At Scannabue, after a deliciously humble tonno di coniglio (rabbit turned into canned tuna) and masterly agnolotti, I tried for a test the same dish (veal cheek on potato mash) I had had a couple of weeks earlier in Meran at the Michelin-starred Sissi of Fenoglio, himself a master of Piedmont-Tyrol hybridisation. And with great surprise Scannabue won the ‘veal cheek contest’ over Sissi: the potatoes had better texture and the meat was even softer while with more flavour – as a counter-surprise, though, Fenoglio’s wine sauce of Lagrein was much more robust than the classic one of Nebbiolo at Scannabue.

And what about the orthodox Italian cuisine that is still so successful? In some cases it bores me – especially in Rome where it is restricted to very few recipes (but I love the artichokes). In many others it is a fake. But in Milan there are a handful of authentic places really honouring genuine ingredients from slow food “garrisons”, like l’Osteria del Treno near Central Station and Gloria near the Navigli. And, even rarer, there are places full of history which honour traditional recipes. Some have become slightly stiff in their orthodoxy, but remember that old Milanese are meant to be a bit grumpy (it is the case, notably, of the Osteria Meneghina). Others still recreate popular memories with their poor dishes of offal and vegetables. It is the case of La Bottiglieria hidden in Via Cerva, open only for lunch (and favourite destination for academics and lawyers from the nearby University and Court). And then there is, incredibly surviving after three decades of Berlusconism in city, the most unbelievable garrison of Milanese proletarian gastronomy: the Albero Fiorito restaurant, very well hidden away from the city centre, not far from the Polytechnic. The cuisine is from Friuli, not Milanese, but this is a real social institution surviving unchanged for something like 50 years. The genuine home-cooked food, served at communal tables only before 12:30 for lunch and before 8pm for dinner, is prepared by mother, son and daughter, all now in age of retirement but still charging only 2.50 Euros for primi piatti, 4 Euros for mains and 3.50 Euros for a bottle (genuine) wine. It goes where the Italian welfare state does not arrive: healthy nourishment, human warmth, socialisation. And honesty: they don’t accept tips and, in a country of tax evaders, they regularly issue tax receipts.

By the way, the veal ethics issue. I don’t particularly like veal meat, but it is a core ingredient of so many Italian recipes. In some cases it can be replaced with little loss: by pork in costoletta milanese and by beef in ragù alla bolognese. But other dishes – saltimbocca, veal cheek, veal liver alla veneta and especially ossobuco there is no replacement. The big wthical problem is that most veal farms use cruel crates to keep veal meat tender and white. However, veal farming is not necessarily unethical, and is in some situations even the right thing to do. First, many dishes (and especially veal cheek) are even better with pink veal meat, that does not require crates nor any other cruelty. But also, the alternative of not eating veal can be worse: male calves are a by-product of the diary industry and in the UK, where they are not raised for veal meat (and very few are suitable to be raised for beef), they are killed at birth, which is, to me, more upsetting. So while I admire vegans, I fail to understand who objects to veal, but pours milk in their tea (and maybe even eats chicken, talking of cruelly farmed baby animals).