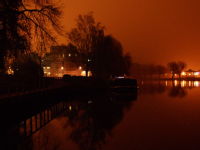 If Coventry is not exactly a cultural heavyweight, at least it is very close to Stratford-upon-Avon, which during the day is little more than a theme park packed with American tourists but in the evening, after day-tourists have left, becomes more silent and allows hearing Shakespeare’s echo. During the last few weeks back in Coventry, while in continental-culture withdrawal crisis, three times I headed to Stratford’s Royal Shakespeare Company and its theatres for comfort – and as always, I did not regret it.

The Royal Shakespeare Company is devoted to, guess what, Shakespeare, and the main theatre only shows its plays. The other two, the Swan and the Courtyard (recently built to host the main plays during the Shakespeare’s theatre transformation in 2006-11), show also different texts, and generally experiment with slightly edgier ideas, although even there texts need about five centuries before being considered. But one splendid thing of all three is the setting: the Guthrie-inspired thrust stages, whereby scenic illusion (quite pointless in the era of cinema) is abandoned to make the actors play in the middle of the audience and exalt theatrical skills. In this regard, the RSC theatre, which before the renovation had a traditional stage, as it reopened last year is particularly impressive: it fits over 1,000 people, all very close to the stage. The downside may be that seats are cramped, but well worth it. Thanks to generous subventions (theatre cannot compete without public support), prices are affordable, with generous subsidies tickets and some very cheap occasions for places with ‘reduced’ (but fully sufficient) view. Last year we run to see the Macbeth as soon it reopened, and we found the transformation as the best improvement in the whole region foe the last decade...

As to the content, if poetically Shakespeare’s texts are hardly surpassable, I must say, to the disgust of my English-speaking texts, that when it comes to the scene, it is better in translation. My best Shakespeare experiences were all in other languages, from Strehler’s Tempest in Milan, to Cieplak’s King Lear in Warsaw with Zapasiewicz, to Langhoff’s Hamlet (in cabaret-adaptation) at Paris’ Odéon, and even a Ninagawa’s Titus Andronicus in Japanese in Stratford-upon-Avon. The simple fact is that translation disentangles actors and direction from the iron cage of the verse and allows the liberty to express the text as best.

This is not to diminish RSC work – rather the opposite: all shows I have seen are, if not the best, absolutely excellent technically, thanks to near-unlimited material means, great actors and skilful directors. In particular, the RSC manages to strike a very difficult balance between updating Shakespeare to attract new audiences, and be faithful to the text and to the core of its spectators (who are not so young nor so progressive). This is usually done by locating the scene in modern or semi-modern times. Both Richard III and Macbeth were set in contemporary times, with some of the baddies dressed up as terrorists. Last month, The Taming of the Shrew was set in post-war Italy, which is both very attractive visually at a time of retro-fashion, and pertinent as an hyperbole of patriarchy – although a Berlusconi-times Italy could have been even more intriguing.

I was curious about The Taming of the Shrew because it is two most politically incorrect play by Shakespeare besides the anti-Semitic Merchant of Venice. How will the RSC make it palatable for a modern audience in a very PC country? With a female director, Lucy Bailay, who makes of Christopher Sly’s Induction the pillar of the show. The Induction was often omitted in classic times, but by putting the Shrew’s story in the head of a drunken tinker, it reverses like in a mirror the meaning of the plot: it objectifies male chauvinism, which is no longer the meaning, but rather the object of Sly’s wicked imagination and therefore of our laugh. The stage becomes a big bed, covered by a huge lines under which Sly sleeps and moves comically, and which underlines the sexual content of the play. The result is a very funny and guilt-free play.

The other two visits to Stratford-upon-Avon were at the Swan, and for non-Shakespearean plays. The first was The Song of Songs, an experimental work by the RSC Movement Department. The text, originally much older than Shakespeare, is the whole 22nd book of the Old Testament in King James Version – itself more or less contemporary to Shakespeare. This is the most poetic of Bible’s books, and it sounds divine even if it never mentions God. I'd say that even for Shakespeare God is a hard act to follow... I had heard beautiful readings of it before – first of all by my wife at our wedding – but taking it to stage is another matter. Director Struan Leslie does it by leaving any theological content apart, focussing on the erotic poetry, adding minimalistic, oriental-sounding music and letting six dancers create follow the rhythm and the narrative. The experiment was for me extremely successful, even if in its originality it did not attract the crowds that it deserved and that more standard RSC productions ensure. By the way, also on a 3,000 year-old erotic text the RSC manages to be politically correct – the performers are four women and two men and the dances and readings, starting from the opening ‘let him kiss me with the kisses of his mouth,’ are not always heterosexual matches, and the mentions of sisterly love are particularly stressed, even if the highest points of the show are heterosexual (by the way, nothing explicit in this institution – the RSC had recently to refund offended spectators after an edgy Marat/Sade.

And the last play was a rare modern one - but paradoxically, the only onw which on stage was set in the past: Helen Edmundson's The Heresy of Love, directed by Nancy Meckler, telling the story of Sor Juana, the XVII Century Mexican nun and writer, repressed by an obscurantist Church. You can hardly get a more feminine production - and this is well suited to Mexico, a country where violence against women is ripe, but whose identity was shaped by women, starting from Malinche (see on her the very instructive Malinche's Conquest by Anna Lanyon), to Sor Juana and then artists like Frida Kahlo, and passing from the icon of Our Lady of Guadalupe. The play might be a bit too long, and I found the subplot on Sor Juana's sister rather redundant. The stage and period costumes were beautiful, although bishop Santa Cruz was dressed in a misplaced papal white (tacit anti-Catholicism?), and the nuns were simply overdressed. But above all this was a very interesting play, both on Mexico identity, and on obscurantism, repression and women segregation. And if you think that these were problems of the XVII Century, well, think of the rapidly shrinking academic freedom in Universities and on the enduring female disadvantage on the labour market. Actually, repression of free thought is still ripe: only in the last few days it was revealed that in the UK the police collaborated with construction employers in the blacklisting of union-activist workers - and even on academics, like Charles Woolfson, who dared investigating Health & Safety matters...

Seconds after the end of the play, while we were still clapping, the fire alarm broke out and everybody left the theatre: for some ten minutes, the shores of the river Avon were populated with mysterious XVII Century aristocrats, nuns and bishops... Stratford is a good place to dream.