Museums and exhibitions, Madrid and Barcelona

As already in an extended stay in and Barcelona allowed me the time for visiting the local museums at human pace. It matters little that I had already seen them most, and not just because fantastic works like Guernica or Bosch´s Jardín de las Delicias never tire. Museums grow, expand and change.

Some have new architectonically interesting extensions: it's the case of the Reina Sofía and the Prado in , but even more of the Museo Picasso in Barcelona. When opened in 1962 it was hidden in the narrow medieval Montcada street, as it was more than inconvenient for the regime. It kept enlarging and the last expansion has just been presented. Its crystal walls contrast well with the medieval buildings as a good example of 'old meets new', and, when inaugurated, will provide a new main entrance from Jaume Sabartés Square and possibly reduce the overcrowding. Although, as far as Picasso Museums go, I will probably keep preferring the more orderly and thorough Parisian one. 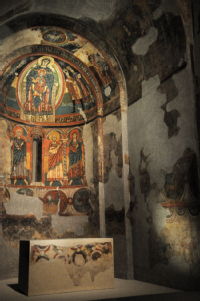 Then there are the new or re-opened collections. In particular, after a long closure, the Romanesque collection of the Museu Nacional d’Art de Catalunya has just reopened. Its collections of frescoes from the Romanesque churches scattered around the mountains, from a time when Catalonia was a ‘world’ power, has been carefully readjusted, with more realistic lighting and a more respectful background paint. The videos on the ‘ripping’ technique used in 1919-1923 to remove the paintings from the Churches, to save them from traffickers and – unknowingly – from the anarchist devastation that would have exploded few years later, are also gripping. Overall, as the Museum director says, Maite Ocaña says, the collections has recovered its ‘mysticism and spirituality’ – which is the essence of Romanesque art after all.

In Madrid, instead, since the last time I was there the Thyssen-Bornemisza Museum has added the international part of the Carmen Thyssen-Bornemisza collection, which the former-Miss Spain baroness collected over the 1990s: it could go under the title ‘how many masterpieces you can collect in a decade if money is not an issue’.

Then there are also the temporary exhibitions, many of direct appeal to me. The ‘Polonia’ one in Madrid’s Royal Palace (until the 4th of September) presents Leonardo’s ‘Lady with an Ermine’. But that is a painting I know well from its home in the Kraków’s Czartoryskich museum, where it can be admired closely in total quiet and with the intimacy it deserves (after all the Lady, Cecilia Gallerani, was a fellow Milanese). Moreover, while exhibitions do have a point, I am not sure about ‘celebrity tours’ of first class paintings: as Botticelli’s Primavera or Leonardo’s Gioconda do not trot the globe, the Lady shouldn’t either. So I refused to queue for her in Madrid. By the way, after Madrid she will come to London, but I repeat: don’t queue in London – wait and go to Kraków.

A more intriguing exhibition was ‘Heroínas’ in the Thyssen-Burnemisza (already over, sorry). It aimed at presenting women as ‘subjects’ rather than ‘objects’ throughout art history: that is not as doing-nothing beauties and saints, but as 'empowered' heroines, athletes, readers, mystics etc, and of course as painters too, especially if self-portraying (Sofonisba Anguissola’s is particularly good). If the idea may sound soppy, just go to the Prado immediately after: and among all Goya’s Mayas and Raphael’s Madonnas, you will really struggle to find works portraying women as subjects. All the Heroínas paintings do it, and very well.

Still in Madrid, and even more of professional interest for me, was the ‘Worker Photography Movement’ at the Reina Sofía (until 22nd August). The movement started in post-revolutionary Russia, equipping workers with one more revolutionary weapon, cameras. It then spread to other countries with strong communist movements, especially Germany, Austria, Belgium and Czech Republic, to the USA and to a much lesser extent Britain and Mexico. Many photographs are exceptional in both exalting the dignity of the worker while documenting the abjection of the surrounding conditions – although those from the Soviet Union, except the very first ones, obviously do only the first of these jobs. The works are presented with lots of contextual materials and one can spend hours reading pages of worker-photography magazines from different countries. The only bewildering part is the Spanish one, which is not about workers but about the Civil War: who thought that they were the same thing? Or is the Civil War the only thing about the XX Century they can sell to tourists in Madrid?

Over here, in Barcelona, the Picasso Museum presents ‘Feasting on Paris. Picasso 1900-1907’ (until the 16th October). Originally at the Van Gogh Museum in Amsterdam, Van Gogh is particularly well presented among the sources of inspirations that Picasso found during his first visit to Paris. By directly confronting Picasso’s works to his predecessors, the aim of the exhibition is defending Pablo from the (rather idiotic, in my view) charges of having done nothing new. In this, the exhibition is successful, although the impression is that Picasso was lucky that in 1900-1907 they had not yet invented plagiarism-detecting software.

And a final personal impression. One of the very first works in the exhibition is Picasso’s amusing little drawing of himself arriving to Paris. It’s one of my favourite pieces from the Berggruen museum in Berlin, which I had re-seen last Autumn. Is Picasso going around Europe with me?