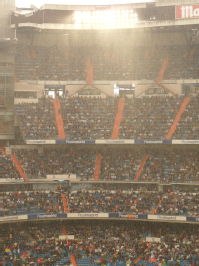 The unfolding of el Clásico between Real Madrid and Barcelona provides more information of the state of Spanish society. It’s not extravagant to extrapolate from this football match: intellectuals and serious media are busy at it, with particularly animated debate on an article by José María Izquierdo in El País (a daily from Madrid, nota bene), drawing an original comparison between Real’s defender Arbeloa, Real’s manager Morinho, horror character Hannibal Lecter and the hawk of the conservative Partido Popular Mayor Oreja.

While the Semana Santa procession took priority over the Marathon on Palm Sunday, the following Wednesday the Semana Santa celebrations schedule had to be revised to make space to the Copa del Rey final and following celebrations. And a week later, the long planned Night of the Books – an evening of book markets and events in libraries and bookshops – was nearly silenced by the concomitant Champions League semifinal. If we add that today’s John Paul II’s beatification is heavily shadowed by a fresh academic book (La Confesión, by J. Rodriguez, 2011) on the Legion de Cristo scandals, we can draw a tentative table of Spanish priorities in 2011: (1) football, (2) books, (3) God, (4) other sports (than football, not God).

I had a direct look myself by going to the Santiago Bernabeu stadium yesterday. Still mainly in the shape of the 1982 World Cup, it would do with some modernisation, but it is uniquely spectacular for its near-vertical stalls. And, for me, it is forever associated to the memory of a Summer evening at the age of 12: the Italy-Germany 3-1 final of that World Cup, as well to a number of other good memories involving Milan winning or Inter losing. Shame that today this is the theatre of Mourinho’s speculative antifútbol – yesterday punished 3-2 by Zaragoza. Under a heavy storm - God's revenge?