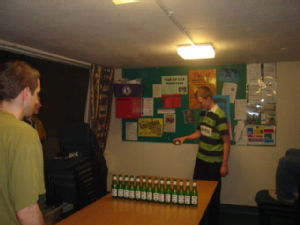 We had the first tournament for a long time last night, but I won't spoil the surprise – Colin can tell you all about that in his own sweet time. The really fun stuff happened afterwards:

Anthony invented Knock-out Glassball, for people who don't mind playing for a long time. The middle bottle is balanced on its head in a glass in the middle of the table (with the usual 6 bottles either side). Points scored as usual, but any bottles knocked down during play remain where they fall, and the game only ends when the ball lands in the Glass in the middle. Richard beat me 70–66 if I remember correctly. What a game…

Later today, exams will be over for the entire Glassball fraternity… woo-hoo! As if that wasn't good enough news, we're celebrating with the introduction of Premium Glassball (more Colining, I'm afraid) in which the bottles consist of special edition Stella bottles – they have gold labels and everything.*
Also, Glassball is spreading – Tomoko became the first Oriental player, and with their natural inclination for table-tennis-esque sports, she took to the game pretty quickly. For a girl.

*everything, in this case, is limited to gold labels