Losers get a dressing gown 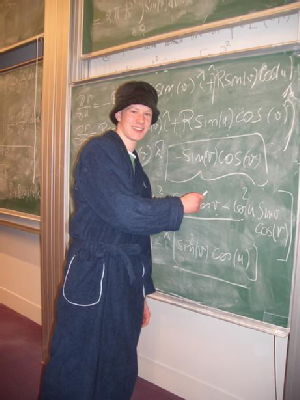 Our hearty congratulations go out to the noble contestants Colin and Rob, who have started a tradition of putting stakes on Glassball matches. Every week a suitable forfeit is mutually agreed on, designed specifically for the individual, and the loser has to carry it out. Colin managed to avoid going to Skool Days a week ago, while Rob had to attend the CU lunchbar on Thursday at 1pm.

This week, it was Colin dyeing his hair blonde or Rob going to another Lunchbar (this one with free donuts) – however, if Rob failed to score more than 6 points, he was also going to have to go to a Maths Lecture in his dressing gown.

Needless to say, the current Kitchen Champ remained stalwart despite furtive attempts to train up Rob by the remainder of the Big 3 whenever Colin wasn't around. Unfortunately, the hype got to Rob, and, being nervous, he lost reasonably badly. No-one changes the colour of Colin's hair anytime soon… But Rob ended up walking into his 3D Geometry & Motion lecture (with about 200 people present) dressed in a tasteful blue dressing-gown, and Colin's kindly lent wolf-feet slippers. Well done Rob!

Been there, done that…

Not something many people can say about Glassball, but in our case, we have very nearly got the t-shirt.

The design went into LazerLizard on Thursday, and since it takes approximately 5 minutes to print a t-shirt, it won't be ready till 4pm on Monday…. I suppose if they prefer chewing on old printer cartridges to printing glassball t-shirts you can't blame them, but come on! How can they expect the hordes of hopeful Hungarian-poem-toting hypocrites to hang about honing their skills in happiness when there's a Glassball t-shirt just waiting to materialise…

Inspired by our in-house fire-juggler Richard, I bring to you…Fire-Glassball! So called due to the increase in the number of birthday candles sellotaped to the bottles (specifically from 0 to about 2 dozen). Very impressive looking it is too, in the dark. We play until all the candles have burnt down, so when you're in the lead, it is tactical to aim to snuff them out. Absolutely no non-ping-pong ball related interference, though. We're not a glass-blowing society…

Big tournament last night, ladies and gentlemen. The Big Three (Colin, Richard and Anthony), David, Tom, Christine, Sarah, Big Andy, Little Andy and Little Andy's Friend (known to most people as John, apparently). We played the first round to 7, with the winners and the best loser going through. Quarter finals to 11, with the same system for choosing four people for the semi's, then the final: Anthony vs Colin. The standard was high, as usual, and as the two titans focussed all their energies on putting a small white plastic sphere the other side of a line of bottles using nothing but ashtrays, the atmosphere was tense. However, cutting the crap, despite an impressive come-back from 19–15 to 20–19, Anthony's return clipped the rim of Bottle 5 and was lost over the base line. Too bad – if we'd gone into setting he could well have pulled through. A loud CONGRATULATIONS to Colin, however, who is the current wearer of the Golden Sash (which may look, at first glance, like an orange and brown Korean Fifa 2002 towel)

Men have died waiting for this to be updated. For now, participants were Colin, Richard, Anthony, Claire, Simon, Christine, Tom, David. Colin beat Anthony in the final. Richard didn't write anything about it.

We have now broken another taboo in the world of international sport: some people would like to claim that over-50s cannot take an active part in mainstream tournaments; that they're too old, slow and forgetful to beat the Bright Young Things of this world. Glassball has joined with International Bowls and the Whist Drive Society of Great Britain in proving that being old enough to remember when you were forty is no handicap in sport, as two of that ilk played against people who could have been their children. In fact, one of them was, because the two landmark-makers were Colin's parents. And very well they did too.

Having beaten Anthony at fewest four times since he took the Golden Sash in our last tournament, I (Colin) was keen to play a new tournament. Eventually, last week, we did: first we played a mini-tournament in which I, Tom and Anthony took part. After Anthony beat both Tom and myself, and I beat Tom, the final was (and we'll jump into third person now) between Colin and Anthony, a game that Colin won. However, he (probably) didn't take the Golden Sash, since Richard was not in the tournament, and the (as yet unconfirmed) rules state that the (as yet unnamed) Big Three must all take part for the Kitchen Champion to be decided. Anyhow, it mattered little, since a bigger tournament took place that very night, entered by the Big Three and David. Drawing lots, the two semi-finals were Richard vs David and Colin vs Anthony. The first was won by Richard, despite some good play by David, and the second… well, ladies and gentlemen, the second was possibly the most exciting Glassball match ever played. Hush, at the back there. Picture the scene: Colin is winning 18–12, and the players change ends… little did he know, when making the traditional overture joke, that he'd lose the next eight points in a row… if you'll pardon the pun, he bottled it. Sorry. Anyway, just as Anthony thought he had the game wrapped up, Colin pulled back the two points to take it to 20–20… and we went into setting. Alternate serves, and whoever took a two point lead would be the winner… after two points, Richard declared that Anthony had won, before both competitors pointed out to him that it was actually 21–21 (in Glassball, the referee's decision is, clearly, not final). And so it continued… it was a sparce crowd of Richard and David that watched what unfolded, but for a moment it seemed like we were in… I don't know, some big stadium where they play table-tennis… eventually, with the game at 27–26 to Anthony, Colin watched haplessly as his shot failed to meet the table, and we had a champion. Well… we had a finalist. Somewhat dazed and disappointed, Colin took his place in the third-place play-off against David, which he won, before attention turned to the final. At first it was close, but Anthony pushed through the pain barrier to reclaim his title as Kitchen Champion. Congratulations.

Glassball on the net

Have you ever wondered where the Brave and Noble Game turns up on the interweb? Well, thanks to our efforts, Glassball is now defined in Urban Dictionary – look!

Yesterday saw only our second non-Warwick Glassball player, going by the name of Robin Clohesy… no coincidence folks, he's Anthony's brother. Perhaps even more excitingly, yesterday also saw the introduction of a new type of glass: having plied away with the Warwick University-issue glasses, I (Colin) decided that variety was the spice of life, and bought a couple of glasses from Wilkinson… of my very own. The 2005 model is somewhat more lightweight, and of a lesser height, allowing faster manoeuvrability and greater control. Possibly. Now, what price would you put on two all-new, technologically advanced, shiny glasses? Well, I only paid 75p. Wow.

Pending a couple of superb action shots, here's a brief introduction to a brand new sport:

But first, a bit of background: As Rootes residents may be aware, the crazy bike trailer has made a come-back. Since Anthony's kind and loving parents (you never know, they might read this) brought it up this term, he has been getting back into the swing of big Tesco shops, despite a completely flat tyre on one side. This trailer has an interesting history, and you may wish to fast-forward the blog a paragraph if you really have no interest in trailers whatsoever.

For those of you who haven't, this trailer was custom built using a few chunks of scrap iron from a nearby skip and a child's bicycle (dragged out of retirement for the purpose). I built it with my dad (oops, Anthony dropped out of the third person there for a second) one chilly weekend halfway through term 1, and it has served its purpose as a platform for a 72 litre indestructible box for many long Tesco shops. I even had some total strangers write me a letter with an offer to purchase it (I won't mention the pitifully low offer here – when one runs a Glassball blog one has to maintain a scrap of dignity somehow). When I refused, they proceeded to attempt to steal it, but somehow the clever use of a nut to secure the trailer to a bolt on the back of the bike nipped their daring exploit in the bud. (To be fair, they did succeed in undoing the nut, but lifting the trailer off the bolt somehow defeated them). The trailer will take quite a lot of stuff, and I once bought 30 litres of orange juice in a single purchase from a nervous girl who insisted that the legal limit was 6, but who gave way eventually to my eloquence and obvious desire for vast quantities of orange juice.

And back to the main point of the whole story – I had just beaten my personal OJ record by buying, in a single purchase, 36 litres of Tesco Value Orange Juice. Now, with all this juice kicking about, it was only a matter of time before someone came up with the bright idea of adapting the kitchen table for air-hockey. Using a total of 32 (that's how many would fit in a square 2 across if we lived in 5 dimensional space) we lined the edge of the table with cartons, leaving gaps at either end for goals. Then, using the Glasses in place of thingys (whatever those things are you use in air hockey), and 4 ping pong balls (one just wasn't hectic enough), the somewhat cowardly and inferior game of Glass-Air hockey was born. I think it got more surprised visitors in the first 5 minutes of its existence than Glassball got for a good 6 weeks, partly due to the excessive noise of ashtrays being violently slid back and forth over a table and the odd carton of orange juice falling off and bursting on the floor. All in all, I think a fitting success for the inventor, creator, director and facilitator that is Anthony. Unfortunately, at the rate at which I drink orange juice, I sense this game being more short-lived than any other multi-ping-pong-ball related game I have ever invented.

Finally, a happy Wednesday from all at the Glassball Federation (officially not recognised by the Warwick Sports Federation for the petty reason that we have 3 instead of 30 regular members)