Would you enter a dark tunnel on your own? A review of Anish Kapoor exhibition in Milan

Dismissed in 1930s, the Fabbrica del Vapore is a former tram factory which re-opened in 2008 as a creative hub with office spaces, flats for artists in residence, performance spaces etc. The complex includes also a huge space for temporary exhibitions in what used to be the hall to assemble the trams.

For this space, known as the cathedral, the 57-year-old British-Indian artist Anish Kapoor has created a site-specific work called Dirty Corner. It’s a 60-metre tunnel made of iron. Half way down in the cathedral there is a conveyor belt dropping earth on the tunnel so that at some point it would be completely covered. 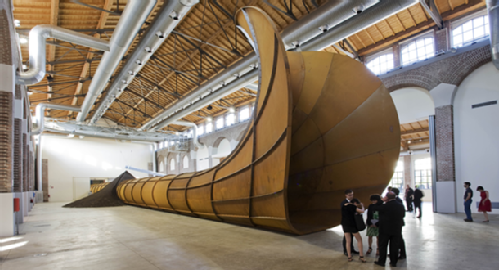 You don’t watch this artwork, you have to enter into it, queuing patiently and waiting for your turn. The entrance is actually bigger than the tunnel itself. This gives you a sense of something getting smaller and slightly oppressive, especially if you stand in front of it looking at the pitch dark awaiting you. This exhibition wants visitors to reflect not just on the artwork itself but also on themselves as individuals.

Ideally you should walk through the tunnel with a partner the first time and then try a second time on your own. Depending on how you feel, you can enter the tunnel as many times as you wish, walking at different speeds and making brief pauses. To truly experience this artwork you need to be on your own without any visual reference, hence it is important you enter the tunnel when the person in front of you has disappeared in the dark.

Since I was on my own a steward offered to join me as I walked into the tunnel for the first time. I was encouraged to take off my shoes as the high heels caused noise, spoiling other people’s experience and mine as well. Silence and dark are both integral elements of this artwork. Being barefoot also allowed me to experience the artwork more closely as I could really feel the iron I was walking on.

Walking into the tunnel is a deeply physical experience. As I moved deeper and deeper into it, everything got darker and darker until we reached the point where it was completely pitch dark. This is the real essence of the work: it’s about losing the sense of space and orientation and having to walk forward in the dark. This is why exhibition stewards provide you with information on what to expect and the kind of feeling you might experience, encouraging visitors to walk into the tunnel first in pair. 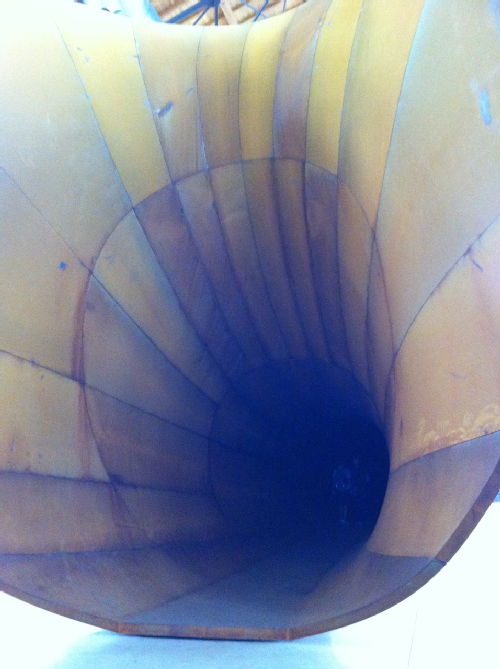 The second time I entered the tunnel on my own. I was told that if I had felt uncomfortable, I could just turn back and look at the entrance so that I could see light and people, before carrying on in the dark towards the exit at the end of the tunnel. When I reached the ‘dark point’ I stopped to let my eyes get used to it. I did not turn back to look at the entrance as I took that walk a bit like a personal challenge, to prove myself I could do it on my own.

The most surprising walk was however the third one. I felt really comfortable about walking into the dark on my own but what surprised me more was to discover that inside the tunnel it wasn’t actually pitch dark! The only explanation I can think of is that my eyes finally got used to the dark. By the time I had reached the exit I could still see my pale shadow just in front of me as I actually realized there was still light coming in from the tunnel entrance.

For me this experience had a very metaphoric value. It was about being brave to walk into the dark and unknown on my own, challenging the feeling of unease, just to realize that there wasn’t really anything to fear and that the dark wasn’t dark at all!

(some more pictures are available in the gallery)