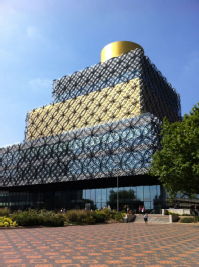 As I leave Moor Street train station and head towards city center I'm immediately reminded of two aspects that for me really define the character of the city: it’s a just a massive shopping center and the place where you can see the highest level of ethnic diversity by simply walking across the streets, the whole variety of human types is just there. 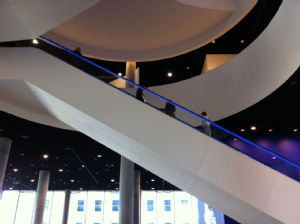 So after making my way through the crowds populating the pedestrian areas and walking past some big construction sites I'm finally in front of the library: the building is stunning! Like a stack of boxes, wrapped in a kind of glittering metal lace and with a golden elliptical shape at the very top.

After taking a couple of pictures it’s time to enter: library shop on the right, library cafe on the left and then the main hall which its open foyer and escalators at the center, leading you up into a circular balcony at the top of a vertiginous book rotunda with more weaving flights of escalators…wow!

As I walk towards the Gallery for temporary exhibitions on the third floor I could not stop thinking that the library architecture resembles a typical shopping mall. I start wondering if the library could just be another example of the commercialisation of public spaces. Cuts to public subsidies make it hard for cultural institutions to make ends meet and force them to be more entrepreneurial. In a city already dominated by huge shopping centers it probably makes sense to build a library in a such a way that it might come across as a familiar space for the general public, especially for those who might not be regular visitors to libraries and other cultural institutions.

The Gallery for temporary exhibitions

The Gallery hosts an exhibition about Shakespeare to mark the 400th anniversary of the playwright’s death. As I enter a member of staff greets me and after presenting briefly the display concludes by saying “Should you have any questions, I’ll be in near proximity”. That was one of those moment when I’m really impressed with the English language: a beautifully constructed sentence, way more refined that the common “if you have any questions, please do not hesitate to ask me”. None the less, it is definitely not an example of plain English, easy to understand for people of any educational background.

While I'm admiring the copy of the First Folio dated 1623 and learning that the library hosts the Shakespeare Memorial Library, a unique collection of books about the playwright founded in 1864, I hear twice the following PA announcement: “We wish to inform our visitors that they can enjoy 50% off all teas and cakes in the library cafe”. Oh gosh: like being in a shopping center…

Initially it was a shock but since the library needs to remain economically viable, it probably makes sense to exploit all the selling techniques typical of the retail sector. Actually the library is also full of signs promoting its “venue hire facilities”, which is just another way to secure additional income.

The lift: burn calories not electricity

My following stop is the Shakespeare Memorial Room on the 9th floor. I take the lift and two things catch my attention. The sign by the lift door (picture here) is simply great! Considering the widespread problem of obesity, that’s a good idea for a public institution to encourage visitors to exercise more and be environmentally friendly by saving energy. Just a little nudge that could hopefully go a long way.

That other amazing feature the library offers me is “uplifting quotes” in the lifts! As the lift doors close quotes from famous writers and poets are played. That is a really cool idea: it’s just a pity there's no display showing in writing the quote and its author. So finally I'm on the 9th floor. Walking first through a panoramic terrace with a stunning view over the city and the ongoing redevelopment I can then enter the Shakespeare Memorial Room. Right now I’m exactly inside that “golden elliptical shape” I saw from outside on top of the library. 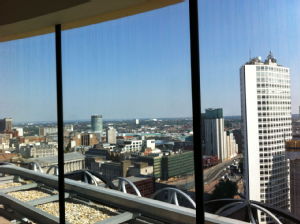 The Memorial Room was designed by John Henry Chamberlain in 1882 to house the Shakespeare Memorial Library in what was at the time the central library. It’s a beautiful room in Elizabethan style with carvings, marquetry and metalwork representing birds, flowers and foliage.

When the central library was demolished in 1970s, the room was however dismantled and stored at the city’s depot. It was later re-built as part of the School of Music complex in 1986 and finally placed in this new library whose design was conceived knowing that a special “place of honour” was needed for the Shakespeare library. 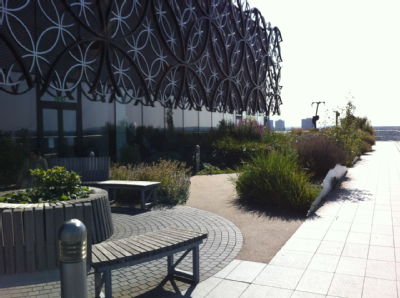 The next stop on my library tour is on floor 7 where according to the signage I should find a “secret garden”. And there it’s: dense planting and benches in a garden the runs around the perimeter of the library. That’s so refreshing to be able to relax and enjoy some greenery even if you’re right in the middle of the city center.

Absolutely thrilled with my visit I start making my way towards the exit. Before leaving I finally notice that on third floor there’s a business center where it's possible to book an appointment to get free advice to start a business or on intellectual property issues.

In the country which had Margaret Thatcher and more recently David Cameron with his vision for a "big society" it should come as no surprise that a public library offers its visitors resources to be more entrepreneurial, which in other words simply means to rely less on the State taking care of you via social welfare.

I've also found this interesting article on the similarities between libraries and shopping center. "Stores and Libraries: both serve customers!"

View here more photos of the library I took during my visit.