This painting was realized by the French painter David (1748 – 1825) during the French Revolution. David could well be defined as a political artist although his views shifted considerably throughout his life. At first he embraced passionately the revolution’s ideals but later became an admirer of Napoleon and supporter of the regime. He ended his life in Brussels in a self-imposed exile when the King Louis XVIII rose to power. 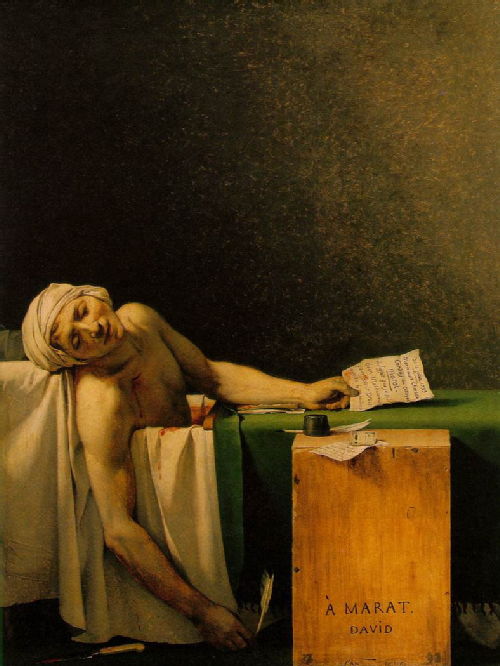 This is an historical painting, the genre prized the most in academies, the real locus of artistic power at the time. In fact, early paintings by David show episodes from Greek and Roman history and myth. However, later on in his career David proposed his own interpretation of historical paintings choosing to paint episodes taken from his time, as it is the case with this painting.

The subject here is Jean-Paul Marat, one of David’s friends, killed in July 1793 by a member of an opposing party. Marat was a journalist and a member of the National Assembly, an administrative body during the revolution. David was an active supporter of the revolution and campaigned strongly in support of the republican ideals. Among other things he was also responsible for organising Marat’s funeral, a pompous parade throughout the city whose purpose was the public display of a martyr of the revolution. This painting was part of this political propaganda.

To understand this artwork there are essentially two aspects to consider: first the style used by David, i.e. Neo-classicism, and secondly the artist’s purpose, i.e. turning Marat into a hero of high moral virtues according to the classical tradition. Neoclassicism as the name says was essentially a rediscovery of classical art from the Greek and Roman time. This style prescribed rigorous contours, sculptured forms, and polished surfaces and was based on ideals of harmony and austerity.

The composition is in fact arranged according to the classical principle of the golden section, a combination of horizontal lines (the bathtub edges, the top of the side table and the ledge where Marta’s head is resting) and vertical lines (the side table, the folds of the white cloth and the imaginary line that passes through Marat’s nose, down his right arm continuing in the fold of the cloth just under his elbow).

The painting is almost divided into two halves: the lower one with Marat, the bathtub, the cloth, the pieces of paper, the inkwell etc. and the upper half acting as a counterbalance as it is just an neutral background.

David’s composition is also very simple in terms of details: each object painted has a specific function, nothing is there as a simple decoration or to show the artist’s ability. We know Marat was murdered because of his wound bleeding and the knife lying on the floor. Quill pen and inkwell symbolize Marat’s work as a journalist while on the paper he is holding there is the date of his death and the name of the murderer. Obviously these last two details are David’s additions to support his propaganda.

Despite being based on an actual event, David has carefully planned the scene. This painting is not concerned with realism, it is not meant to be a snapshot of how things went. We could say that David presents us with a “carefully staged death” as in theatre. The sense of space is reduced to a minimum as David is not preoccupied with the rendering of a perfect perspective of a room but he is rather interested in idealising Marat.

The artwork is quite big (162cm x 128cm) as it was intended as an official commemorative painting. We know Marat had a skin condition and the only relief he could get was to lay in a bath from where he also used to work. The scene should then be set in a Marat’s bathroom. However, the room painted by David has nothing of a real bathroom: we can see just a bathtub. We do not know what is in the rest of the room, there is no door and no window. The back wall is empty and blocks the viewer’s eyes forcing him to focus on Marat in the foreground. Linear perspective is reduced to a minimum and can be seen for example in the representation of the tub which obviously needs to have a certain depth to host Marat’s body.

Marat’s body has no sign of the skin condition affecting him as David wanted instead to idealize his subject. Marat is shown in a classical position with his right arm and head taking opposed directions. It is reminiscent of Jesus’ position in the Descent from the cross by Van der Weyden (picture below). 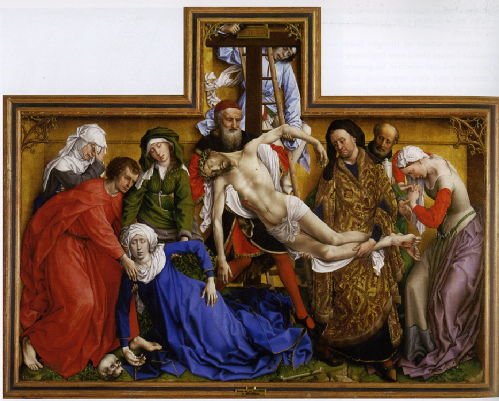 The subject, although realistically depicted remains lifeless in a rather supernatural and monumental composition. Even David’s signature and dedication to Marat are done as a stone engraving typical of monuments. Marat’s body is partially lit by a light coming from the left as visible by the shadows on Marat’s torso and the shadow created by the piece of paper he holds. It is not possible to tell where this light comes from: rather than natural light it represents a kind of divine light illuminating a martyr.

The body is rendered as a solid and detailed form where you can see the muscles. His right arm is also painted with a careful modulation of colour hues, possible when using oil paintings as in this case. The backward part of the right arm is shown in full light but as you move towards the right it becomes brownish as that part is not illuminated, suggesting the roundness of the form.

For Marat outline was more important than colours. The scene is in fact carefully drawn in sober tones. The more brilliant colours are the white of the cloths, the green of the bathtub top and the yellow-brown of the side table. Despite being a murder scene, there is just a tiny little splash of red to represent blood as the painting was not meant to be dramatic and gruesome. Colours are quite saturated adding a solid consistence to the surfaces. Marat’s body could in fact well be of marble, with the bathtub representing also metaphorically stone grave.