Good reads on the UK riots: a personal selection of articles with comments

Extract from Matt Grist's blog entry "No excuses, some remedies"

The first [factor to consider] is that riots in the UK always happen in August. Is this the heat? It is certainly easier to be on the streets in warm weather but 21 degrees celsius with sunny periods is hardly boiling point. The major factor here is that the school holidays are already three weeks in, and some young people have now had three weeks of completely empty days. They are going off the deep-end as a result.

So one thing that could be done is to end the six-week summer break from school beloved of teachers and the middle classes. It doesn’t suit some young people, whose attainment in school falls afterwards, and for some, whose nutrition levels drop dramatically away from free school meals and breakfast clubs. Distribute the holidays more evenly throughout the year and even extend the school year by two weeks.

The idea of blaming 'holidays' for these riots makes me smile. I know you can't make straightforward comparisons between counties as there're many factors to be considered, but still: in Italy students have 3 month holidays over the summer and they don't take the streets rioting. The solution proposed, to extend the school year, is just funny: let's keep them at school all the year round then! This would also create more jobs for teachers...I think Grist's solution is just another form of overt state control: youngsters are not trusted to be able to use wisely their spare time so let's keep them behind school walls.

And what is going to happen when these young people have completed their course of study? Taking into account the high unemployment rates, Grist suggests the government should take measures to create new jobs and improve training schemes to help youngsters develop the skills required by the market. So let's keep them under control, within a regulated environment either of the school or the workplace. Who knows what might happen when these people have time off, will they go wild as soon as they leave their workplace?

It just seems to me this is a example of the so called 'fear of the youth', where an entire generation is demonized and held responsible for the most hideous crimes and abuses. Furthermore, Matt Grist's comments are based on the assumption that the rioters were all aged 16 - 19. However, the defendants appearing in these days before the magistrates appear to belong to a much broader section of the population, very heterogeneous in terms of age (though it's true that they are definitely young and under 30 years old), personal circumstances, ethnic group etc.

On a different note is Zygmunt Bauman's analysis. He wrote that these rioters are "defective and disqualified consumers" and the problem is again social inequality. As society wants us to be first and foremost consumers, individuals are then defined by what they can buy and what they can't. "It is the level of our shopping activity and the ease with which we dispose of one object of consumption in order to replace it with a “new and improved” one which serves us as the prime measure of our social standing and the score in the life-success competition. To all problems we encounter on the road away from trouble and towards satisfaction we seek solutions in shops."

Obviously social inequality becomes a more pressing issue when the economy is stagnating and the government imposes severe cuts...which affects more people on a lower income leaving the wealth of the riches untouched. It's just appalling that the world's population of high-networth individuals has grown and the value of their wealth has raised too (Source: http://www.forbes.com/forbes/2011/0808/focus-credit-meltdown-unemployment-brig-rich-richer.html).

"Why am I surprised that these young people behave destructively, "mindlessly", motivated only by self-interest? How should we describe the actions of the city bankers who brought our economy to its knees in 2010? Altruistic? Mindful? Kind? But then again, they do wear suits, so they deserve to be bailed out, perhaps that's why not one of them has been imprisoned. And they got away with a lot more than a few fucking pairs of trainers.

These young people have no sense of community because they haven't been given one. They have no stake in society because Cameron's mentor Margaret Thatcher told us there's no such thing." (click here for the full article)

So we have a ruling class unable, or rather unwilling, to share the costs for this economic crisis: austerity measures are just for ordinary people. The better-off can maintain their lifestyle, their privileges won't be cut.

Some commentators also suggested that these riots put at risk the whole concept of the "big society": as the welfare state has been getting thinner and thinner, the gap hasn't been filled by people volunteering their time, skills and donating money....hence, we have seen social turmoil.

However, in these days Londoners and citizens across all the other UK have shown all their support to people and businesses affected by the riots. Armed with brooms, ordinary people have helped clean up the debris of riots, they have donated food, cloths and whatever was needed to people unable to return to their homes in the boroughs torched and looted by rioters.

Their efforts are certainly praiseworthy, they show people are willing to return to normality and the rioters are just a minority, not representative of the whole of society. However, I have the feeling politicians will turn all this to their advantage claiming that the solidarity people demonstrated is proof that the big society is actually feasible and the planned cuts to public services will remain in place.

It seems road signs in Milan are having a makeover and the result is quite amusing I would say.. 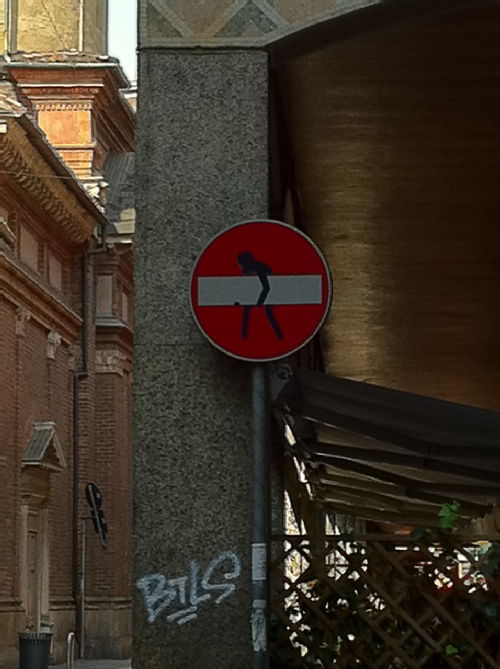 This is however not an avant-garde initiative by the recently elected new mayor but the work of Clet Abraham, a French -born street artist, now based in Florence.

From a technical point of view the works are very simple, in the sense that they consist of just a sticker added to the original signs. The artistic intervention is not so overt but rather quite sober as it matches the communication style already adopted for road signs.

If you look at the picture on the right, you may notice that the man has actually been done in the 'matchstick style' used regularly to represent men in road signs. Hence, the sign does not come across as something utterly out of place. The viewer is then encouraged to 'accept' it as a sign communicating something important, which is actually the function of road signs.

The key aspect is the new meaning signs acquire. In addition to regulating our behaviour on the street by stating what we can and can't do, artistically-enhanced signs convey also an amusing message.

I think the original and the new message remain clear simultaneously. Hence I'm confident drivers can still interpreter the 'official message' of the sign without any risk for road safety.

Unfortunately, I also expect these signs to revert to their original aspect shortly since concerns for safety and legal aspects will inevitably have priority.