Milan and the Taraxacum88 lamp: a beautiful example of math in the city 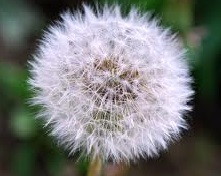 The name of this lamp derives from the taraxacum flower which assumes the shape of natural sphere when producing its fruit . The number 88 refers to the year when the lamp was designed. 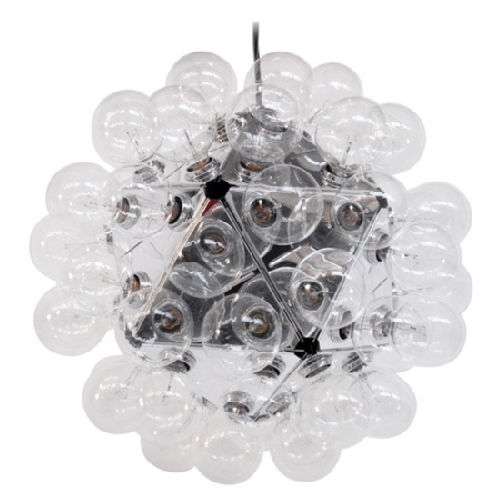 This lamp shows that an icosahedron, one of Plato’s shapes, is the one closest to a perfect sphere.

The structure is, in fact, an aluminium icosahedron made of 20 identical equilateral triangles. Each triangle holds three light bulbs and the final effect is a sphere!

Where to see it

Three examples of this lamp can be seen in the foyer of Theatre Dal Verme in Milan (address: via San Giovanni sul Muro 2).

The picture below shows the theatre foyer. 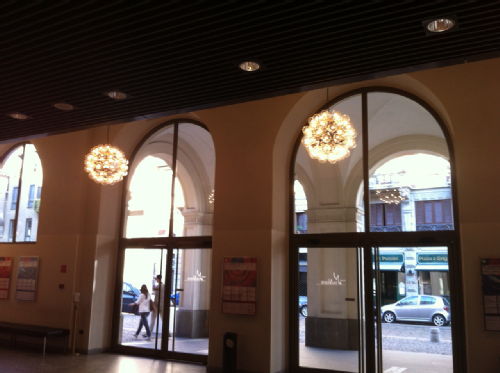 This lamp was designed by Achille Castiglioni, a famous Milanese designer and architect who died in 2002. To explore further the structure of this lamp it is possible to visit the office/museum of Achille Castiglioni in Milan. Here you can see some sketches and some examples of the equilateral triangles used to make the lamp.

To see a beautiful drawing of an icosahedron I suggest also to visit the Ambrosiana library in Milan. The library holds in its collection the book De Divina Proportione, written around 1497 by the mathematician Luca Pacioli. Leonardo da Vinci made all the illustrations for the book. The picture below shows the icosahedron drawn by Leonardo da Vinci. The solid is also represented in its skeletonic version and it is easy to see that it has 30 edges and 12 vertices with 5 faces meeting at each vertex.