All entries for Tuesday 09 November 2004

Just a quick note for all you Actington Stanley fans:

We drew our game 1–1 today! It was a wonderful, brave performance by all and the support we had was once again inspiring! Special thanks go out to Hugh Denard for all his support!

As the great song states:

"things can only get better" 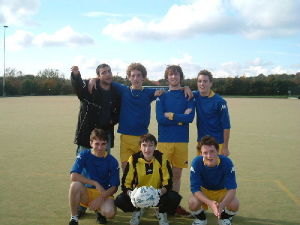 Is there room for fruit on a pizza?

Hello everyone!
I would like to put forward this widely debated question:

Is there room for fruit on a pizza?

As a big fan of the Hawaiian pizza, I am in favour of fruit on a pizza. However, I am aware of the varied opinions on this topic and would like to open it up to the Warwick Blog community.

Thanks very much,
Gethin

Most often they are depicted as half man, half goat. Also, the masks are much more serious than those used in Old Comedies

The Vase 96AB113 is clearly depicting a scene from an Old Comedy. The costumes suggest this as they are grotesque and exaggerate features such as the stomach, phallus and chest. The stage depicted in the vase also suggests an Old Comedy as it is very sparse and not as extravagant as those used in tragedies.

The vases do help record an idea of what Old Comedies and Satyr Plays were like e.g the costumes, the staging etc. However, they are based on artistic interpretation and were most probably originally made for visual pleasing e.g for display. Therefore, they are not entirely reliable.