The birds and the trees

In one of those random thoughts moods again, so here goes (thought about it last night on the atomic pub crawl).

Has anyone ever seen a partridge in a pear tree? In fact, come to think of it, I don't even know what a partridge looks like (according to Penny it's smaller than a pheasant).
I'm not even sure if I've seen a pear tree either (Stefan reckons that pears could even grow from the ground!)

My point is, I think the "12 days of christmas song" gets our hopes up about wonderful birds in trees (that might not even exist).
Also, when was the last time anyone got 5 gold rings on the fifth day- or any day for that matter! I'm tempted to try and sue the songwriters for false advertising. Does anyone know who wrote it?

Do you ever find that you're spending all your time trying to achieve something or to get through a difficult time, and think that when its all over, you won't have anything else to worry about?

I mean, look at exams and education, do we ever get to the end of "achieving" and don't have anything else to do to become successful?

Its like going up a mountain and the peak seems to be just a bit further, but you get there and find that there's a higher peak.

Just when old problems seem to be sorting themselves out and life seems to be settling down, something else pops up and you then have to deal with new challenges.

I don't want to seem like I'm complaining to God, cos there's sooo much that he's done that I'm really thankful for.
I know over the past couple of years, he has really been watching over me and my family, and the one lesson I've learnt is that things happen only in God's time, not my own. So being patient is one of the many virtues I know I should pursue, but being honest, have not achieved yet!

I think I'm still struggling with the idea that I can't do things without God's strength. When things don't go my way, I feel that I've failed. But maybe this wasn't part of his plan, and fighting for the things I think will make me happy, aren't the things that would make me happy after all.

Maybe the answer is to just pursue God, and the other things in life will just happen the way they're meant to happen.

I think I spend too much time worrying about things. Anyway, I've rambled on about stupid things enough already, think it's time to stop.

Random thought I had in Varsity last week-
do chickens float, or do they sink?

I reckon if they can't fly, then they'd have to swim, otherwise God's given them the short straw…
…unless they can dance, cos that would make up for it.

A test should be held to crack this thought provoking enigma out before its too late… who's with me? The Bell is ringing

This morning I woke up to the sweet sight of my Delirious album. Not only do I have the new album "Mission Bell", I am now the proud owner of a signed copy! Well, thats all my childhood dreams fulfilled, well except becoming the next James Bond, but there's still time yet.

Watch this space for a review…

I've just done a few tests, here are my results:

50% chav (whats wrong with taking the free shampoo from a hotel?)

Not really sure how that works, but I really can't believe that I'm more of a geek than Alex!(he got 45%)

Find these tests on:
www.jengajam.com

Try them, and let me know what U get!

Well, its the end of a good, unusual night out, but a very funny one. It was TP's B'day, and we all met up at The Old Orleans for some drinks and then ppl went onto Jumpin' Jacks. I went back with Tara and watched Halloween H20 in the dark, most jumpy bit was when Sarah rang us- nearly had a heart attack.

Highlights of the evening:

Today our shower's been converted to "au naturel" thanks to our landlord. We just have to wait till it rains. He was trying to fix a hole, sort of made a bigger one in the process. So this morning, Ai Vy and I have to go round to Penny's for a shower! Follow-up to Photos from The Little Blog of Chav

Well, some of summer's photo's R up in my gallery now. Apologies to Tara, but U didn't bribe me, so the bin pic is up.
Oh, and sorry to Miche, but the pic is too good NOT to put up! 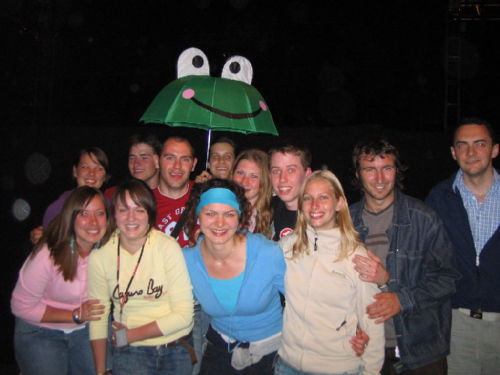 In keeping up with Alex & his blog (which is far inferior than this), thought I'd start updating my photo galleries. I've started a Singapore gallery, which will have more soon. I'll be putting up some other ones from the summer- so watch out for such photos as "Tara in a bin" and "The virgin Jenny"!