Marry in haste and repent at leisure.

First of all, the saying title is not apply to me. 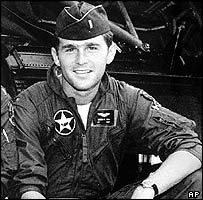 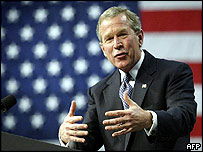 President Bush's been re-elected. He's proved that he's better than his father – Eld Bush. WI supports Kerry, I still remember on my way home last Saturday, the halloween night, there was a guy asking me about who I will vote for, I know he supports Kerry and myself dosent really have any clue about it. I will vote for Kerry, because I am in Wisconsin. Never fight against local. Sometimes it could be dangerous, I was taking the candies from Bush's Supporter during the parade weeks ago, because I am a girl and I am foreigner etc, so I didnt get beaten by local. But I almost got my friends…You can imagine that thousands of pp on street, nobody but me wants the candy from Bush… ^^ I will never do it again. well, if I have the chance.
Young Bush.
Oh, here is a interesting letter, introduced by JBK.

To All American Voters,

I am a senior citizen. During the Clinton Administration, I had an extremely good and well paying job. I took numerous vacations and had several vacation homes. Since President Bush took office, I have watched my entire life change for the worse.

As a matter of fact I lost virtually everything and became homeless. Adding insult to injury, when the authorities found me living like an animal, instead of helping me, they arrested me. I will do anything that Senator Kerry wants to insure that a Democrat is back in the White House come next year. Bush has to go.

I just thought you would like to know how one senior citizen views the Bush Administration.

Thank you for taking time to read my letter. 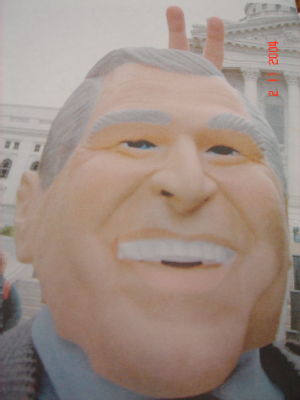 I was talking with Alex and his dear gf – Elisavet. She wants to come to China and work there. I am happy to hear that.

www.cnn.com
Looks like G.Bush's gonna win, which means I have got at least one question right for Acct Quiz 4.
I did ok for last week's exams. ^^