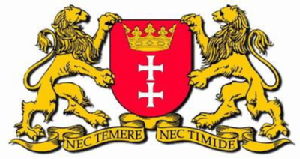 I have just arrived in Danzig. At first is always a strange feeling. Gdansk really exists and I am there. The some feeling occur to me before I arrived there.
I got in the Luton Airport some 25 m. before 6:00 am. Took a tee and eat the best muffin of my all live just for 20p. (In the airport!!!)
My flight was delayed 2 hours, I just lied on the seats and tried to sleep.
Finally the airplane arrived! I got in the airplane, everything was perfect.

Some how there was something like 6 hostess, quite strange for a low cost airline company. All of them were checking half of the airplane, but always the some half, so the never checked the half where I was. On the other hand they were always asking for sorry in a childish English.

The plane took off, oh god; it was horrible always shaking from the right to the left. The worse was the landing. The woman pilot start making ruch turnings, and when it was really near of the ground it was shaking from on side to another much worse than before, I was really afraid, Gosh!!!!! 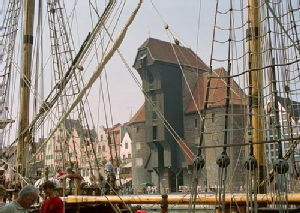 Danzig/Gdansk, I arrive to the airport. A very small airport. Militaries make the turn of typical airport personal(?). Every thing looked chaotic. Pass control, the really cigilous frontier police personal takes long time analyzing each passport, well we are talking about polish people. When it turns to me, he check the passport number on the computer, takes the number, always with a severe look.

The airport building is new, everything is on small dimensions contrasting with high of the building.

More than one hour to take the bus to the city. I believe the driver skipped several duties.

He arrives! I ask a girl to help me with the ticket, first he takes my 10 zloty note and doesn't give nothing back. The girl explains me that she is paying less because she is a student. I say, I'm a student as well, she translate and he gives our money back, just like that. 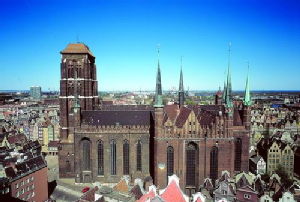 Bus
Alt, alt, von der Sovietzeit!Goot! The bus was a museum piece. It takes a long time to get into the city, young people gives their place to the old people, very nice! The bus got full!!! Literal stucked, and slowly it starts to stink, oh gosh! Not even the coldness of the morning disfarced it any more. 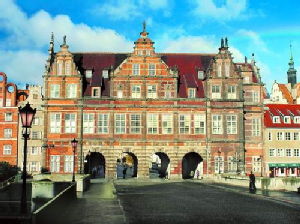 I get out in the Train Station. I tried to look for a city map, to find some of the hostel's addresses that I the previous days took from the internet on a worry. I also try to look for the time tables in the station for Sopot. Where I want do go tonight. I ask the lady in the information desk, she doesnt speak English or German, and my Czech is not coming to my memory. An old gentlemen try to help. It's not the first time that some elder people try to help me in English. In East Germany that's almost impossible. One might easy understand why.

First hostel, the area is horrible, I get to the local and something tells me not to go further, I even walked some stairs, but I got back. I loose my self, or I believe I do, which really leaves me frustrated, I have to walk back again, and that's when I realise that on the end I was in the right way. I do should be a bit more unpretentious.

I walk through the old city centre is marvellous. A Street full with flower shops, big red brick churches like the ones one might find in Hamburg or Luebeck. I'm in a hansiatic Town, and that brings excitement and enthusiasm. I approach the harbour, and again the feeling of the spice city of Hamburg comes to my mind. Memories, history, recreation. I like it. 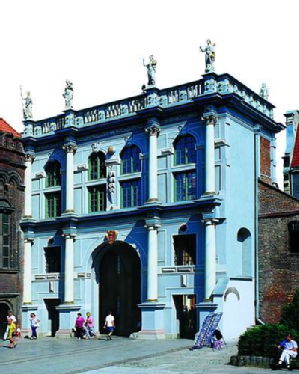 The hostel, just in front of the harbour. I ring. Noone. The door has some glasses broken and glued. A blond blonded woman come to the door. I ask her if she speeks English or German in Czech, she says no, and somehow I'm happy. What I learned from Czech is getting useful. I try to explain her that I wand a bad, she understands, I'm feeling the superman. But soon the problems arises, I get really difficulty in explain her that I want to know how much is the room, she pretend she doesn't want to understand me, and suddenly all conversation gets blocked. I self block and from that moment on I just have a kind of telepathic language to save myself, I use my hands and express feelings through the face. It results! Could it be that she blocked because I was getting well with my Czech. But of course I myself wonder would it be possible for a Czech person to understand me. 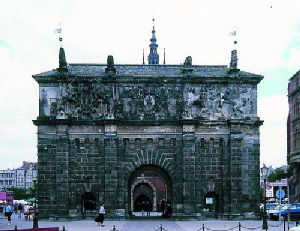 The German guy
On the common room a German guy is! He looks really gay, but he is from Hamburg and that changes for it self the all situation. Hamburg I said, yes. As Im using the internet a female friend from him arrives and I heard comments like "I don't know why they call it Gdansk when the city's name is Danzig" is has much to be said. Because as I said they are from Hamburg and that changes the all panorama.

It's 17:00 I will walk around through the city. I really existed about this hansiatic thing. I would love to visit Kaliningrad.