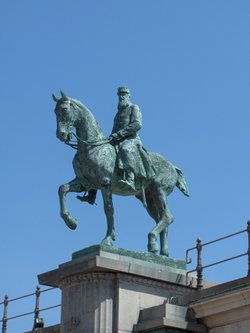 The picture in London is rapidly clarifying into a series of coordinated terrorist bombings. Pretty soon, I suppose, the recriminations and the real panic will begin. I think everyone is pretty numb right now.

Of course, this attack is a surprise to nobody. We've been predicting attacks on the UK all along. Unlike after 9/11, there isn't going to be a sudden awakening. We know why they hate us. We know (probably) who they are.

There is very little, it seems to me, that we could have done. Doubtlessly, people are going to be appending this to the ID card bill. But this is one of those attacks that such a bill will not help. The public transport system is just too big, too broad to be included in an identification scheme. By definition, such a system has to be vulnerable.

Another 'obvious' statement to make is that this has something to do with the Olympics. Of course, the timing is very unfortunate, and will lead to maximum world visibility. But it is deeply unlikely that an attack can be organised to such detail in 24 hours. Speculation will happen, but it won't be accurate.

We need to remember this attack changes nothing. Iraq is still as it is before. The issue of security and rights are still unchanged. The risk of being attacked is still the same, now that one has succeeded. We must not be taken away by the emotional tides, and let our fear and terror betray us.