I am an user of web forums. Not just an user, but an ex-addict. Once upon a term, I posted over 20 per day. And mostly, I am ashamed to say, in the various religion subsections. With experience, as the various ranters, preachers, and holy warriors came and went, I realised that it was actually pretty pointless.

Seriously, every discussion about religion is pointless. Maybe it's just my atheist perspective, but in the end, either someone has made an obvious mistake (like he's (and it is always a he) a creation 'scientist') or we fall into definitions. Eventually, it become clear that all the debate was about was the fact that different people have different world views, and that since most of these world views are ancient, we realise that all of them are perfectly self-consistent and adequate for this world. Hence, the pointlessness.

Bearing this in mind, a weekend of conferences on religion seemed a rather… curious idea. More or less all of the events were under-attended – and I suspect the ones before noon (which I did not go to) were not attended at all. But from what I saw, the weekend was both heartening, and extremely depressing.

This was written at 1 am, so I am harsher than I should be, probably. My quotes are also probably inaccurate. Feel free to correct me. Just don't hurt me.

Pluralism, and why atheists suck

The first one I went to was the pluralism lecture, by a muslim cleric whose name I cannot remember. (This isn't prejudice, or anything. I don't remember the names of 90% of the people I meet.) Anyway, you can probably guess the content.

Focus on what we have in common blah, blah.
There is only one god, blah, blah.
Religion can be a force for good, blah, blah.
Building bridges between wierd, floating islands, blah blah. (Inaccurate too, since each island must be connected to every other. Perhaps it is better for there to be a hub based structure instead.)

But of course, there was something missing. So I (and several others) put my hand up.

"What is the role of the atheists in a pluralist future?"

Ho, ho ho. The answer is that there is no role. He mumbled something about consumerism, of course, and obscured further with some comments about lower, and higher forms of 'coexistence'. Belief in the rights of others was apparently a purely religious notion. Etc, etc. Me, sitting, felt cold to the depths of my stomach.

Some greek guy once said: "I'm not an Athenian, nor a greek, but a citizen of the world." And in away, this man, standing before us, was saying just that. But not quite. He was a citizen of the god-fearing world. As diametrically opposed to the secular world. He could not believe that people can be good without faith. His pluralism suddenly sounded not like understanding at all, but a sort of temporary alliance so we can all turn on the unbelievers.

My throat felt dry. So I bought some milkshake.

Not actually saying anything at all

Next, we had a talk on religion in international politics by another guy. A nice guy. A guy who talked about religion. The gist of the argument was that religion forms an important part of human life, and that major international efforts for peace and charity and so on should include religion, because religion has so much power.

Of course it does, because I cut out the clutter around it. The rages against evil politics who is always trying to turn religions against each other. (Even if true, this does not absolve religions of responsibility. This sounded so much like scapegoating, and usually is anyways unprovable.) The bizarre attacks on the separation of church and state. The recommendation of spiritual approachs to problems. And so on.

But devoid of these, there wasn't any real issues. Not as far as I can see. Nobody denies the important role of religion. Unless he is trying to tell us that religion should lead such efforts, which is simply illogical – religions aren't made for these things.

Next, the modern crisis of religion. Hmm, if I was chairing this, I would maintain that the modern crisis is that there is too much religion, and particularly too much hard religion of doctrine instead on understanding. But this was chaired by two reverends – one from Warwick, and one from Bangor.

So they talked, in turn. The sort of thing you'd expect. Rise of spiritualism + fall of established religions as worrying, and what we can do about it, and so on.

Then the questions started.

Why is the rise of spiritualism worrying? Isn't it good that people are actually deciding for themselves what they believe in, and can pick and mix what they like from the world's faiths. This question was asked three times. Differently worded, of course.

W: No. Spiritualism is bad because it lacks discipline. Children should be initiated at birth, because it gives them a warm fuzzy feeling that everyone around them believes in the same thing. The church of England as an establish thing is good, because it gives christianity advantages, and we all know christianity is the One True Religion.
B: Well, I think it is quite good that people are making informed decisions, though we need to make sure they aren't exploited. Did you know that only the most extreme christians think of the bible as the only source of truth? We trust in reason and tradition as well. In fact, I'm perfectly willing to talk about other religions with anyone for whom christianity clearly isn't working, and I'm allowed to conduct services for any faith. Though gay marriage is a problem. I like to separate doctrine from practice.

At this point, they threw each other subtly angry looks.

W: This table isn't big enough for the two of us!
B: Come on then if you think you're hard enough!

Ok, maybe not the last bit.

So I went back to Westwood, and returned for

Which was a harmless and entertaining multicultural concert. Which was pretty fun. Which is the end of this entry until tommorrow, when I talk about Sunday's stuff.

It's not paranoia if they are really watching you. And maybe, just maybe, they are.

Ever heard of TEMPEST? No, not the computer game. And for the occassional English literature students who have somehow wandered here (good for you!) not the famous play by the Bard, TEMPEST is an acronym meaning more or less nothing, used by the American military, CIA, NSA and so on.

What TEMPEST does is it lets them read exactly what is shown on a CRT computer screen.

Ok, maybe that doesn't concern alot of you flatscreen people, but I assure you, they have other ways. To the rest of us, this means that with a van outside your house and the proper processing software, they can grab passwords, read your documents, anything. Like an invisible guy standing over your shoulder all the time.

No doubt, some of you are thinking that this is just a wacky conspiracy theory. But TEMPEST really does work. It works because the electricals in your monitor produce radio frequency waves which can be received and interpreted.

Want proof? Then go to Tempest for Eliza. 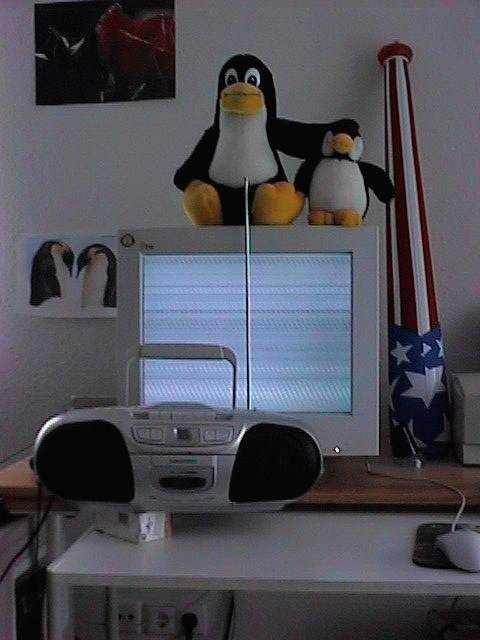 You'll need a number of things for this to work. First, a radio, hopefully one that recieves AM. Next, you need a Linux computer running X11, which you know some display settings. (If you have root privileges, run xvidtune) Lastly, you need a CRT monitor. Then, download, compile and run. Soon, you will be able to broadcast your mp3 files using your monitor as a transmitter.

Jerry Springer: The Opera is good.

Funny, incisive, beautiful and banal. It's everything you have ever wanted. 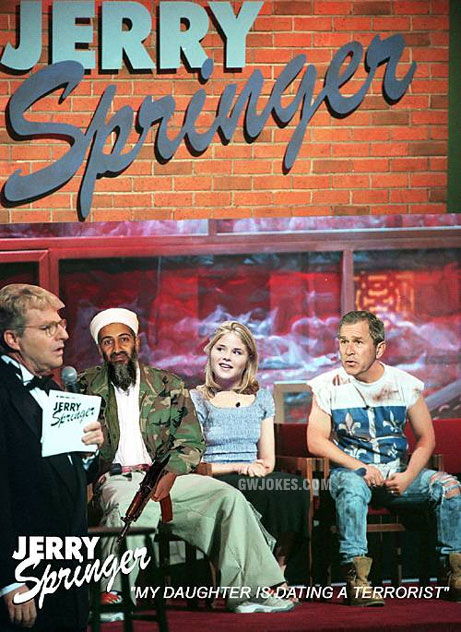 Because quite obviously, they haven't seen the Opera.

To use the words of a smart guy, this show is on the side of the angels. In fact, if anything, this is a challenging program that in many ways supports the Christian agenda. (The good christian agenda, the agenda of respect for your fellow man and so on and so forth.) The show castigates, and rightly so the outlook of a society sold on looks, sex, guns, bad religion and humilation. Western materialist decadence (wow, that does easily roll off the tongue!) is that which is mocked.

Some of it may be crude, but the greatest crudeness comes from the small 'audience' onstage. And this gives an important message. At times, the show gives a little wink back at us. A little quick look, a momentary change in tone. When you laugh, and you will laugh, there is a sense of discomfort – what are you really laughing at? Now and then, the veil comes down a little, and you can look into the stage-managed ugliness, this modern amphitheatre, and think how much of our modern life is like that. There is swearing, but I don't think how it could be credible viewing without it.

It seems, later, that even death is no escape. Springer finds himself in a banal hell to suit the banality of his life.

Dante would have been proud.

Oh yeah, and the guy who kicked me off tv for the last few minutes so he can watch football... F*** you!

This is not a dvd review.

Specifically, I have not seen this on DVD. And probably never will. What's the point? This film has appeared a couple of times on TV, and is a black and white adaptation of a stage show. The film is set in only one location (ok, maybe two, if you include a toilet), and involves nothing more than characters talking, and waving, and raging at one another. Sure, you get probably some paltrey extras on DVD, but really, they are meaningless.

Premise is straightforward, and I suppose not a little over-optimistic. 12 men sit in a small room, debating a murder case. From the beginning, 11 of them easily assume that the defendant is guilty, and should go to the electric chair. Except for one. Then slowly, they become persuaded, and the arguments for the execution fall away into doubt and personal prejudice. And humanist liberalism wins out in the end.

The script is perhaps a little heavy-handed in its treatment of issues like the justice of the jury system, the morality of the death penalty, and the duty to be objective. And the conclusion probably is very predictable. But at least it deals with the issues at all. The director shows superb skill is managing the atmosphere, and the actors never fail to be utterly convincing.

A must-see. Unless you are claustrophobic, or something. In which case, run like the wind.