We are all so screwed…

It seemed like coincidence, in the beginning. Then we started begging for it to be a coincidence. But now, it seems to be a fact.

What do they have in common?

Answer: They are all complete and utter f***-heads.

Seriously. I dare you to think of a single guy on the ascendent recently who is anything but an utter asshole. I give you twenty seconds.

Time's up. Told you so. It seems to be a matter of fact that out of all the population of 6 billion odd people, only the bad float to the surface. 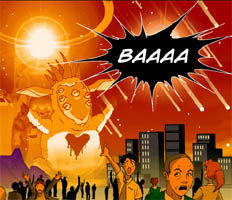 No matter all that optimism about democracy, that belief that people are fundamentally good and will make good decisions about stuff, the opposite happens. Again, and again, people enpowered decided to abuse it, to shirk their responsibility, or to put that power in the one person most monumentally retarded enough to put it to terrible use.

Does democracy really work? What if the terrible, evil people at Neocon central are right – that it is the people who are in fact inner savages, who need to be led by enlightened absolute leaders, who work out long term interests whilst keeping the people blissfully ingnorant with simple lies? Or maybe, it's us that is wrong. Maybe we should all turn and join the dark and horrible horde. Enlightenment values are dead. Resistance is futile.

Finally, some commentary on the Rat ZInger. (from the previous link)

At the most basic level, many Catholics cannot escape the sense that Ratzingers exercise of ecclesial power is not what Jesus had in mind.

On the other side, can Ratzingers conservative admirers admit that the careers hes derailed, the views hes censured, do not belong — and never did — to real enemies of the faith? That the forms of symbolic violence that are the tools of Ratzingers profession, the excommunications and censures and inquisitorial procedures, are in the end Catholic versions of the same abuses Jesus condemned in the religious authorities of his time? Can conservatives see the poignancy of this question: If truth is attractive and the faith is compelling, why do we need heresy-hunters at all?

Oh yeah. A fun link. Apocamon. May be offensive to people who find stuff offensive