Does Trimalchio create a feast of fools or a dinner from hell?

The wealthy freedman Trimalchio from Petronius's satirical novel the "Satyricon" is infamous for his outrageous, extravagant banquet where he forces course after course onto his unwilling guests amdist a rising volatile atmosphere (chs 28-79.) But is his grotesque decadence, excessive gorging and topsy-turvy cena merely a representation of a typical Saturnalian dinner? Or does Trimalchio, who already parodies the emperor Nero, create an atmosphere of anxiety, violence and splendour which alludes to the dangers of Nero's court?

The Roman Saturnalia was a time of relaxed social restrictions when the upper class could revel excessively in food, drinking, gambling and sex. Roles were reversed, masters served slaves and any man could be king. How true this all is, Mary Beard remains highly sceptical.1 Indeed, the most famous 'Saturnalian king' which we know of is Emperor Nero himself!2 Not quite your average Joe or Gaius...

Upon arriving at Trimalchio's house our main character Encolpius is immediately terrified by the sight of "a huge dog with a chain around its neck" only to realise it's a painting on a wall with the ironic phrase above "BEWARE OF THE DOG" (ch. 29). 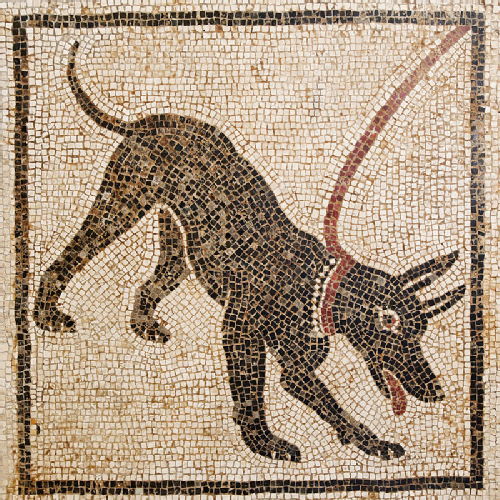 -This appears to be not an uncommon piece of art as the image has been found on surviving wall paintings and mosaics in Pompeii, such as the picture above-

This "Trompe L'oeil" dog is the perfect introduction to the cena as it sets the tone for a meal where nothing is as it seems, and of a host who delights in tricking his guests. Indeed, the entire cena is a rollercoaster of surprise and deception.3 Only Trimalchio knows what's coming next due to the tyrannical power he holds over the meal as he orchestrates deception after deception.

The painting of the dog is merely the beginning, from misleading food dishes to pretend performances Trimalchio certainly puts on a show;

For appetizers, peahen eggs turn out to have marinated fig-peckers (baby birds) inside of them (ch. 33). During dessert, any guest who reaches for a cake is squirted with saffron oil from the phallus of a confectionary Priapus (ch. 60). A fitting joke, considering Priapus is the God of fertility and male genitalia. All of these topsy-turvy antics create a sense of the Saturnalia as Trimalchio takes our expectations of the banquet and flips them into something new. Our perception is inverted and we are left to laugh at such instances of the grotesque and absurd, both essential ingredients to satire.4

However the unpredictability of Trimalchio's 'comedic' cena also leaves us with a sense of uncertainty and even fear. Helen Morales in her introduction to the Penguin edition of the Satyricon argues that this unpredictability within the cena creates a lurking impression of menace and violence. Sometimes this violence is fake and staged, like when the chef pretends he hasn't gutted the pig and Trimalchio threatens to flog him, only for it to be revealed the pig's entrails are actually sausages and black pudding (ch. 49). But sometimes the violence is very much real, like when Trimalchio suddenly throws a glass at his wife's face (ch.74). This fluctuation of real and unreal all adds to the atmosphere of "anxiety and chaos."5

But why would Trimalchio create such an aggressive feast? It could be that Petronius may be commenting on the grotesque excessiveness of the Saturnalia. However this idea of Petronius doesn't quite match with the description Tacitus gives us of him (provided that they are the same man). Tacitus tells us of a Gaius Petronius who spent his days sleeping and his nights in the "business and pleasure of life." An intimate friend of Nero, he served in his court advising the emperor on all matters of taste. When ordered to commit suicide he threw himself a Saturnalian-esque feast and spent his last moments eating and drinking with his friends.6 This does not sound like a man who would lecture on excessive pleasure.

So perhaps the answer lies deeper.

It is commonly accepted that Trimalchio is characterised with subtle references to Nero.7 Like Nero, Trimalchio wears a gold bracelet on his arm, he keeps the trimmings of his first beard in a golden casket and during the feast an acrobat falls on him, parodying a similar incident that happened to the emperor (chs 32, 29, 53).8 Additionally Trimalchio's use of saffron, an exceptionally expensive resource, for the mere purpose of pranking his guests could be a reference to when Nero used the spice to line the streets of Rome upon his return from Greece.9 Both men use the resource outside of it's intended purpose as a means of extravagantly displaying their vast amounts of wealth. Thus Trimalchio acts as a mirror image for Nero's theatricality, his sudden mood changes and his tyrannical nature. It therefore stands within reason that, as Trimalchio represents Nero, his volatile and opulent cena reflects the dangerous and lavish nature of Nero's Court. Moreover the instability that subverts Trimalchio's Saturnalian revelry and his own capriciousness symbolises the instability of the Empire under Nero's reign.

Analysis of Tacitus's depiction of Nero argues that Nero's career as an emperor was very much like that of a Saturnalian King.10 Regardless, it would be more fitting to call him, and his caricature Trimalchio, Saturnalian Tyrants. Trimalchio abuses his power as host over his guests, distorting the liberatory, excessive and unpredictable nature of the Saturnalia into a tyrannical, hellish cena that parodies the violence and grotesque opulence perverting Nero's Court. In conclusion, Trimalchio does indeed throw a Saturnalian banquet, though one that is fit for a Tyrant rather than a king.