If you've misplaced the handouts on essay writing and referencing from last term, you can find copies on this blog post (sign in to view).

Questions for the week 10 seminar:

Jude and the University

This is quite an old Radio 4 discussion from 2003 about Jude the Obscure and the university system, but nonetheless raises some interesting and pertinent issues about the novel in the context of our focus on Culture and Change, and on the idea of the University more broadly.

In addition to the preparation questions I suggested, you might also want to think about the relevance of Jude today and the various questions it raises around university education as part of its wider debates around "culture".

Questions to prepare for the seminar on Jude the Obscure:

This edition of Radio 4's Great Lives series features Oscar Wilde, with discussion by Will Self, Matthew Parris, and Franny Moyle, the biographer of Wilde's wife Constance. The programme is fairly predictably but nonetheless informative in its focus on Wilde's later years, and the 1895 trial in particular, with some focus on The Picture of Dorian Gray. It's also interesting to hear the perspective of Wilde's wife being raised - and if you want to know more about Constance Wilde then Franny Moyle's biography Constance: The Tragic and Scandalous Life of Mrs Oscar Wilde is well worth reading.

Two topical pieces of reading if you'd like some extras to make up for the postponed class this week:

In "Marry me, Bosie!" Dr Thomas Dixon offers some alternative perspectives on the criminal trial of Oscar Wilde in 1895 and the concept of "the love that dare not speak its name". We'll cover some of the trial and background on Wilde in the next class, so this piece offers some useful additional context.

If you bemoaned the over-commercialisation of Valentines Day last week then you might enjoy From Sentiment to Satire in which Dr Alice Crossley blogs about the Victorian origins of Valentine's cards - this also raises some interesting ideas around culture and cultural access from our week 5 reading.

The Value of Culture Alongside this week's reading on culture and change, you might find this recent BBC radio 4 series The Value of Culture interesting. In the first of the 5-part series, Melvyn Bragg discusses Arnold's Culture and Anarchy and looks at its influence on later thinkers. The programme provides some useful contextualising of Arnold within Victorian social reform and education debates, and draws out some of the links to Ruskin's Nature of the Gothic. There's also some discussion of the idea of the university, which sets out a few issues in advance of Jude. Episode 1 is the most relevant to what we'll be discussing on Monday but episode 3 on "two cultures" will also be useful, and episode 5 returns to Arnold to explore his notion of culture in the context of today's society.

The extracts for week 5 are now on the module homepage - see the right hand sidebar for a document labelled "Aesthetics extracts for unit 4".

Essay writing resources have been uploaded on the previous blog post, which you will need to be signed in to view.

The Great Exhibition of 1851

In the Bleak House classes today I talked about the Great Exhibition of 1851 as one important context in which to situate the novel. These watercolours by Henry Clarke Pidgeon give an idea of the objects on display and, in the second picture, the size and scale of the Crystal Palace: The building itself is interesting because the iron and glass architecture produced an unfamiliar experience of space, disrupting perceptions of size, distance and scale - seemingly objective, stable categories of understanding one's position in the world. I've written a bit more about this here.

The Great Exhibition also provides context for Wilkie Collins's The Moonstone: the "moonstone" itself was inspired by the Koh-I-Noor diamond which was on display at the Exhibition: 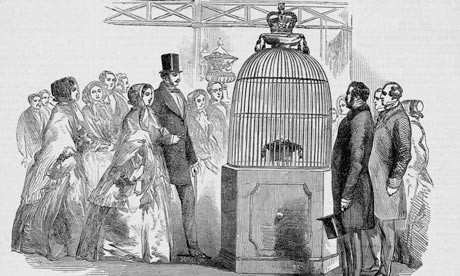 The Guardian's "From the Archive" series brought to light a piece about the Exhibition shortly after its opening in 1851, noting that "the English showed most curiosity about the foreign half of the exhibition, while foreigners eagerly inspected the British department", and briefly mentioning the Koh-i-noor which "appeared to be the chief object of attraction among the fairer portion of the assemblage".

I've written more about the Great Exhibition and connections on my research blog.