Just in case you are worried (apologies if I am by no means the first to notice this), please take the Warwick I-fear-I-am-going-to-die-of-bird-flu-test. No panicking now, you're unlikely to get bird flu after you already had SARS the other year…

The other day, I was talking to my flatmate Niki at dinner when she asked, "So, when you think of time, how do you think of it?". Needless to say, I was a bit confused by this statement coming à propos of nothing, so I asked her to explain more fully. She then asked, how did I picture time, in terms of days, weeks, months and years. What's strange is that I knew just how to answer her. When I think of a year, I think of it going like this…

Starting at the bottom (January, obviously), and taking a sharp right at April. This means that I guess my life looks like a staircase, which I just spent 10 minutes drawing out in underscores and l's, but which blogbuilder won't let me show. angry face (well, not so much angry as ever so slightly bemused. You get the idea…)

Which is nice, now I think about it, it's like my years are climbing towards something, even in the literal way that I think of them. I'd never considered that before.

Niki, on the other hand, thinks of her years as being a kind of upright oval, going anti-clockwise downwards towards June and then up towards December. As for weeks and the progession of each month, she thinks of each week as progressing in a linear fashion from right to left . Obviously, this clearly proves her to be insane, but that's another topic for discussion entirely. When I think of a week, it moves from left to right, and when I think of a day it climbs vertically towards midnight, then kind of drops off in a curve down to the bottom at 6 a.m.

So, I mentioned this to some friends (two of which philiosophy majors) and none of them were able to elucidate how they think about time. So now I would like to know if Niki and I are, in fact, confirmed crazies, or if there are other people who have considered this… thank you for your time given in this groundbreaking piece of research.

Well hello there kids! Long time, no blog, I know, but with the promised 10meg ADSL hitting a rue des Stations near me in the next week*, I thought I'd better get back into this blogging lark. It's the only reason I'm paying however much I'm paying to be a part of the Warwick Graduate Association (that and continued library membership, which I am obviously getting a lot out of here in France. I wonder if they do mail order), and so I ought to use it. Plus it will give me something to do with my brain with all this free time. I am still on the search for something useful to do with my free time, but in the mean time, I thought I would take up flamenco.

Those who are close to me know how much I love to dance, and to dance flamenco has always been a dream of mine. After my sister bought me Strictly Ballroom (possibly my favourite film, and controversially beating Dirty Dancing in the "favourite dance film" stakes), my passion was inflamed. I never dreamed, however, of reaching the dizzy heights of dance fame that I have achieved in such a short amount of time. As you can see, I have already earned my place as flamenco's hottest new talent. Somewhat embarassingly heading the line-up in preference to hot Spanish names such as Lita Delgado, I have nonetheless earned my position by wowing the critics both Spanish and otherwise. Unfortunately, the mullet didn't quite cut it, and I have to wear a wig, but I feel beautiful and elegant in my (home-made) full-skirted, beaded dress. Obviously, I am not leaving my pupils out in the cold, and they support me fully, knowing how much my entertaining career means to me. Now just bring on the tourist season

I was reminded of the fact this morning that I am the only person in the world who can tickle herself… cos I did it. I would like to point out that this makes me amazing, but I wonder how I prove it to the Guiness Book of Records??

I have a home!

Stuff the expression people, it's the mullet that counts, can't you see that? I would also like to point out that I said the shortest layers were 3", I can get a measuring tape if you're that bothered. Furthermore, the landlords said I can stay right where I am, so I am no longer homeless! My new address is 120 rue des Stations, Bâtiment B2, Lille 59000, FRANCE. I should have a phone line within a week and internet the week after. Yay!

Ok tout le monde, my mullet in plain view for all to see (apologies for my lack of eptitude at formatting this entry). I don't want any fake compliments, thank you, I would rather all joined with me in railing against the French hairdressing machine. Hence any comments that don't agree that my mullet is truly hideous may or may not be deleted, I just can't say. I also attach a wonderful picture of a party we had while my hair was still attached to my head, and another of my housemates. If anyone knows of a way I can attach a video to this baby, I can give you a preview of the Mullet Song, penned by my good self and mullet friend Shelley, to which the words are: "Mullets together, happy as one: Mullets together, having such fun". Of course you cannot experience the musical genius without hearing us breaking it down, but there you go. 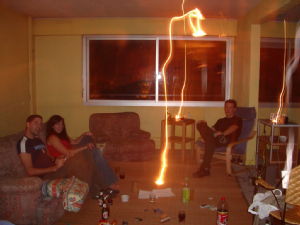 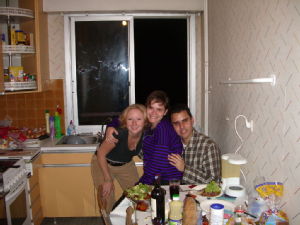 I would just point out that no-one has taken up my kind offer of coming to visit me in the next two weeks, which you are really missing out on. Lille is full of great things, like dog crap and men who can't keep their eyes in their sockets. Go on, give it a try. 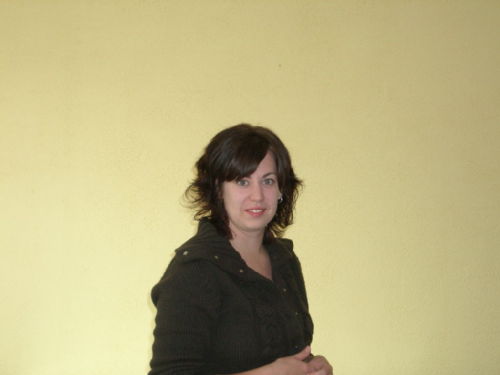 So here's a thing. There are some days of a woman's life when she wishes she was male. Today is one of those days. Gentlemen, be thankful. When you grow out of your bad fashionable haircuts, you can cut them off. Not so the ladies. When you go to a French hairdresser, show them a picture of a nice, shoulder length haircut and they give you a THREE INCH MULLET you can do nothing about it. Just cry. It took me 4 years to grow out my last ill-advised haircut. In 4 years' time I will be nearly 26!!! By that time I'm meant to have a house and babies and stuff. But no, I will have to hide away in a hole until such time as I can look in the mirror without crying.

Oh yes, and to top it all, I al homeless, one of my schools hates me, I am alone and in France and I wanna go home!!! That is the end of my rant.

… I'm on holiday from 22nd October to 6th November. So if anyone fancies a visit to Lille, come see me!!!

Hello! My first ever French entry. I'm sat here in one of my schools having just been handed a whole bunch of papers. They're all interconnected in that you cannot complete one of them without needing something off one of the others. To get paid, I need a social security number, then a medical, then a bank account, then an address… none of which I have as yet. I was staying with my friend's cousin, but his flat wasn't exactly spacious (his flatmate slept on the sofa!!) and he was quiet, to say the least. At the moment, I've moved in with another assistant, an American called Niki, and her flatmates Totti (a Spanish girl) and Miguel (a Mexican guy). So I'm likely to learn more Spanish than French at the moment! I should be meeting up with a French girl tomorrow who's looking for someone to flat-share with, so maybe I might get somewhere, as she, unlike me, has things like a bank account and a French guarantor. Could be fun.

Well, I'm going to go get ANOTHER form filled in so I can get my train season ticket (because obviously it's necessary for your employer to prove you work where you say you do, otherwise people might end up taking hour-long train journeys every day for fun) then I'm going to check out the lovely town of St-Omer – can't wait. A bientôt…

Ok, I don't want to make anybody throw up or anything… but I do want to say thank you to everybody who has looked after me and helped me to get better over the last couple of weeks. Without your hospitality, prayers and patience, I would not be going to France on Saturday. Please do keep on praying for me, as I will do for you, and keep in touch, because I am going to be one lonely little jetsetter (trainsetter??).